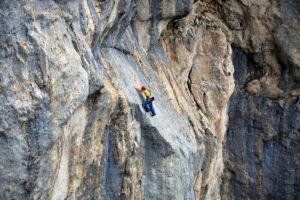 This story initially featured on Livellozero.net in Italian.

It’s been ten years, and I keep searching in the mess that is my computer. Maybe I wrote something, – feelings, emotions – but I can’t find anything. Erba del Diavolo (Devil’s Weed), Bertrand Lemaire and Roberto Rosica, July 20th 2008; “probably the most difficult and still unrepeated route of the Gran Sasso massif“, the guidebooks say… I smile to myself.

It had all started much earlier, when, without taking a rational decision, I stopped going to the mountains with my father. First of all because he was my father, and secondly, because my way of going to the mountains with him was just not right. He always took way too many risks, in a genuine sense – he had nothing to prove, except to himself – and I ended up doing the same.

At some point Roberto had finally managed to convince me to go to Gran Sasso with him. That first time he was taking a client on the Vecchiaccio, the super-classic route on Corno Piccolo. Gaia and I had planned to follow him, but the route was too busy, so we did the nearby Colpo Grosso instead.

Pretending to be immortal, believing that all the bad things which may happen on the mountain only belong to somebody else, and don’t concern you, is something necessary. Every alpinist plays this game, to a greater or lesser extent.

My way of climbing the mountains hadn’t changed much in all those years. I simply climbed the wall, putting up as fewer protections as possible, and if some risks had to be taken, I would have taken them, without asking myself too many questions. I simply didn’t realise it and just felt invincible, that’s all. Pretending to be immortal, believing that all the bad things which may happen on the mountain only belong to somebody else and don’t concern you, is something necessary. Every alpinist plays this game, to a grater or lesser extent.

This is our reason for getting out from our beds in the morning, and for entering into a hostile environment, like the vertical one. After Colpo Grosso, I immediately realised how much I missed the mountains. During all those years of cleaning and setting up the bouldering area of Meschia, together with Stefano and Mauro, I had honed, without even realising, the way I looked at rocks: finding a line on a 3m boulder is not very different from finding one on a 300m wall. I really think I am able to read the rocks. I think I have a talent for this. After a few other classic routes I went to the second Intermesoli Pillar with Roberto for climbing Di Notte la Luna. One of the most beautiful and intelligent routes of the Gran Sasso. I returned there a second time with Gaia, for trying the first free ascent. I barely managed it, because I had zero endurance, having mostly climbed on boulders up until then.

Whilst rappelling I looked around and saw it. Right there, on the right face of the pillar and very evident: the crack system of the first pitch, the small overhang, the little corner just before the slab, and then the big overhang. Everything was crystal clear. I returned back a week later, climbing the near-vertical grassy slopes of the opposite side of the Herron-Franchetti gully alone, checking upper pitches and taking a few pictures. Further to the right there was Roberto Iannilli’s project, Il bosco degli Urogalli – very beautiful too – which could limit the possibilities of where the route would top out on the pillar.

It is very hot in the Herron-Franchetty gully. The starting boulder problem is nearly a joke: the wall is separated from the ground, where I am standing, by a 1m-wide, 10m-deep hole. You need to lean the body across the split like a bridge, grab the first holds on the opposite side and then pull yourself onto the wall. The first pitch goes all free, but Roberto insists that I need to change my strategy and rest on protection gear instead. He is right. I still remember that mindset shift. Before that, my “rules” for a ground-up first ascent were very clear in my mind: no prior rappelling on the route, no expansion bolts, very limited use of trad gear and no aid climbing. Sadly those rules are not going to work here. The overhang of the second pitch might be aid-climbed, using poor bolts and skyhooks, but there will be no way of free-climbing it, at least by me, relying only on those cheesy protections.

That same evening Fiorino hands me a hand drill and a few expansion bolts saying “what the fuck are you doing man, drill a few holes, put anchors in there and stop being a freak“. Of course he was right too. A few days later, hanging from that nice traditional orange bolt, which I had desperately hammered upside-down in a blind hole last time, I hand-drill my first 8mm hole half a meter above. “But why hand-drilling, for Christ’s sake?” you may ask. Making concessions, especially to yourself, takes time. I will understand this later, as well.

Anyway, three weeks later, while I am aid climbing the same pitch, trying to reach the upper headwall, the good old orange bolt suddenly pops out from its hole, while I am hanging on it. I hit the slab below with my left hip and – Roberto will tell me this later – I pass out. I end up dangling in space, upside down, a few meters from the wall. Now everything is on him: Roberto uses the service rope to take me back to the belay and wakes me up. The hip is hurting badly and my helmet is full of blood. Everything else seems to be ok. I’m mad at myself, and I want to start over. I tell him that I will wait for a few minutes and then I will go up there again. I am in shock and I do not even realise it. Roberto, with no words and precise manoeuvres, arranges the rappels. As the adrenaline rush fades, I realise that I cannot move.

The weather is nice, we still have the whole afternoon ahead, for making it back to the parking lot, from where we started. It isn’t a tragedy, but I can not walk. After the rappels I crawl on the rocks back to the main hiking path. From there Roberto has to carry me for 50 meters, then he goes back, takes the backpacks and repeats, until we reach the end of the dirt road. He leaves me there and runs away for rescue. I sit there for another couple of hours, leaning on a rock under the sun and breaking small stones with my climbing hammer. Weird enough it feels good, very good. But probably it is time to stop. I am running away from something, but I don’t know what it is yet.

We finish the route the next year, in July 2008. Towards the end, Roberto is getting bored and I can’t blame him. Those long days at the belay are all the same. I strand on the fourth pitch, before saling away on the final moves. A dense mist separates me from Roberto and I can’t see him anymore. All I can see is the rope disappearing in that cushioned floor, which is kinda reassuring. I climb mostly unprotected for too many meters, since I am not able to put any decent gear in those small holes. It is very risky, not because of the technical difficulty, way below my limit, but because I have no idea of where I am going and have no idea that the moves just below the next belay will be so delicate and aleatory. I still perfectly remember that feeling, a feeling of absolute freedom and euphoria, like when climbing free-solo. That’s the Devil’s Weed, and you may not want to take too much of it. I would not do those moves right now, if I were in the same situation again. Not like that. That would seem totally pointless in this moment of my life, but I am also happy that I did it that way.

With Roberto we never really climbed together again, or only very occasionally. Maybe we will rope up again in the future, but it will be a different thing, because 10 years have passed. We completed the route together, and those feelings, tensions, misunderstandings and joys were left up there. Alpinism is an intimate thing, which, in some ways, is impossible to tell.