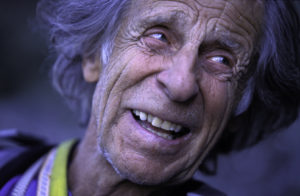 Fred Beckey, the American climber whose list of epic first ascents reads like a history of North American climbing in the twentieth century, passed away yesterday.

The East Ridge of Devil’s Thumb, in Alaska; El Matador, on Devils Tower in Wyoming; the Northeast Buttress of Mt. Slesse, in British Columbia; the West Ridge of Mount Hunter, in Alaska; The Beckey-Chouinard, on South Howser Tower in the Bugaboos, British Columbia. Fred Beckey’s climbs litter the ranges of North America, and the routes he authored tell the story of climbing in the twentieth century.

On Monday, October 30, Fred Beckey, one of the most prolific American climbers and a pioneering first ascentionist, passed away at 94 years old. Climbers young and old lamented the loss of the community’s elder-most statesman. And, up until his last day, Beckey was still gunning for more time in the mountains. In Outside magazine’s obituary, Beckey’s friend Megan Bond said, “We were planning another trip to the Himalaya for next spring. He had a lot more to do.”

While Beckey’s profile among dilettante climbers never reached the levels of his climbing contemporaries—like Edmund Hillary—or compatriots—like Yvon Chouinard—among serious climbers he was as revered as they come.

Beckey was born in 1923 in Dusseldorf, Germany, and came to the United States with his parents at two years old. He cut his teeth climbing in the Pacific Northwest in the Cascades and the Waddington Range, and in 1942 made the second ascent of Mt. Waddington with his brother.

Perhaps his best year ever in the mountains was 1954, when he made the first ascents of Mount Hunter (4,442 meters) and Mount Deborah (3,761 meters), and pioneered a new route on Denali via the peak’s Northwest Buttress.

Though he roamed North America untrammeled and enjoyed unrivaled successes, Beckey’s climbing in the Himalayas invited controversy. On an expedition to Lhotse in 1955, Beckey left his ailing partner high on the mountain, ostensibly to go get help. According to an obituary in The New York Times, Beckey’s partner, “snow-blind and nearly frozen without a sleeping bag, was rescued by others, but it was a misadventure that Mr. Beckey never lived down.”

Having been burned in the Himalayas, Beckey continued to focus on the shorter but harder hidden gems in the North American ranges. The 1960s were another fruitful decade for Beckey, with famous climbs like the first ascent of Mount Slesse’s Northeast Buttress, a route that would go on to be included in Steve roper and Allen Steck’s 50 Classic Climbs of North America. (Beckey established a disproportionate seven of the 50 classics on the list. Among them are his previously mentioned climbs on Mount Hunter, South Howser Tower and Devils Thumb.)

In his later decades, Beckey maintained an undimmed passion for climbing of all types. A photo of Beckey in his early 80s, standing on the side of a road, draped in climbing gear and holding a cardboard sign upon which the words “Will Belay For food!!!” are scribbled gets to the heart of the man. Patagonia used the photo, taken by Corey Rich, in an advertisement in 2004. In “STORY BEHIND THE IMAGE: The Creative, Spontaneous Life of Fred Beckey,” Rich writes that the advertisement “really seemed to provoke a positive, emotional response in people. Part of that is because Fred really has set the bar for what it means to be dedicated to the climbing life, and this photo captures what Fred represents to the climbing community.”

“But,” Rich continues, “the real reason the photo works is that it goes beyond being just a representation of an abstract ideal; it captures who Fred is genuinely … This photo IS Fred Beckey, through and through.”

A documentary film about his life and climbs, Dirtbag: The Legend of Fred Beckey, is currently making the rounds at film festivals. Keep an eye out for a screening near you to learn more about Beckey and his singular influence on North American climbing.