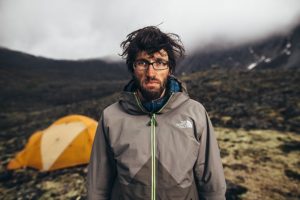 Hansjörg Auer: No Turning Back

“There is only one person you will have to bear for the rest of your life: yourself. That’s why being alone is so difficult. Even in the mountains, and not just because of safety. Being alone strips you naked, it makes you understand who you are, what is your value, the things that matter in life”.

This interview initially featured on Livellozero.net in Italian.

Hansjörg Auer has been climbing since he was twelve years old. In 2007, the young and virtually unknown math and sports teacher free soloed the 37-pitch route Via Attraverso il Pesce on the Marmolada South Wall, and overnight became the shooting star of the climbing scene. In the last ten years, Hansjörg has put together an impressive number of first and free solo ascents around the globe, from Dolomiti home walls to Karakorum and Siberia. We reached him in Umhausen, in his native Austria to talk about the past, present and future of his activity on the proudest walls of the globe.

L0: You have previously said that since your childhood you have always been good at being alone. We all know how a childhood can deeply influence our later behaviour as adults. Do you think that your quests for solo ascents is an attempt to recreate the feelings you had as a child?

Definitely. I kind of had a hard time as a child. Not at home, on our farm, more in school. I never got the feedback I would have needed. I guess that’s why I flew into the sport/mountains and started doing things, which I knew I was good at. And, somehow, I always felt happy when I was alone. Waiting for friends to come with me, waiting for their schedule to fit in, was never what I did. If nobody had the time or the psyche to come along, then I preferred to go by myself. And my parents were happy to see that. They never pushed me or my brother, but also they never stopped us from doing things and being out in the wild.
L0: You decided to go for the free solo of Weg durch den Fish when you felt that you were ready. How can one possibly be “ready” for something like that? Is there some kind of a mental process or set of stages that you need to go through, or do you simply just wake up one fine morning, and you are suddenly sure that in that exact moment you will be able to complete your project?
Free Solo climbing is all about finding the right moment. It’s not about special training or preparation. Of course, you need to be physically fit, but you can’t train to become a free solo climber. Being patient and waiting for the right moment to come is the crux. And, in my case, that moment always arrives all of a sudden. Before that happens, I keep thinking and focusing on the project for many weeks, but then the now it’s time moment comes pretty suddenly, without warning and in a somewhat unexpected way.
L0: From bold free solos, on big rock walls, like Marmolada you seem now to be shifting your interest towards mixed climbing ascents, in winter or the Himalayas…
I think the life of a climber is always about shifting motivations. When you’re younger it’s more about what, where and how hard you climb. But, in my case, this is now changing a little bit. For me nowadays the most important thing is with whom I climb. A few years ago it happened that I had been more focused on free solo climbs on big rock walls like Marmolada. And also the interest of the journalists and of the climbing world regarding my activity was pretty much the same. But, even then, first of all I have always been a mountaineer and therefore mountaineering is nothing new for me. Nowadays I feel freer and able to consider the many different possibilities that the mountain have to offer and to pick up only the projects, which motivate me the most, be it rock climbing, mixed climbing or whatever other styles in between.
L0: Annapurna III south ridge: After these past few months, can you tell us more about the November 2017 failed attempt? Do you plan to go there and try again?
This project is no longer relevant to me. We had some internal problems and controversies within the team last year, but I don’t want to comment on this in a more specific way. That was basically the reason why we didn’t even go to Annapurna base camp, having climbed Ama Dablam to acclimatise. I’m still planning to go to Karakorum in the Summer of 2018 with Alex Blümel. We will try for another great project, a 7000m peak. Wild, long and in alpine style.

L0: Motivation vs Expectation: the desire to push the limit is probably difficult to manage. Do you ever feel that you are caught between your personal ambitions, and the expectations of what people / media / journalists might expect from you?

That’s a very good question. I would say that some years ago I was probably caught in the mechanism you are referring to, but not anymore. As you get older, you generally get much more relaxed about what other people are thinking, saying and expecting from you.
Sure, social media and “the business side“ of my climbing is part of my life too. I like to take care of that aspect of my activity as well, but for me, it is absolutely not the main priority. That’s also why I enjoy so many low budget trips and expeditions, without too many other people or cameras involved. My focus is currently much more on the mountain and on the project, and that’s what it’s all about. Business-wise I prefer to drive on a normal road in my authentic style, rather than on the highway, in a car steered and driven by somebody else.
L0: What have you learned from your climbing activity after all these years?
The most important thing is to feel satisfied and to be able to achieve this feeling not only when you are climbing, when you have just realised your greatest project or when times are good. To succeed in this, I think you should consider climbing and mountaineering, not as the most important thing in your life. For me being in the mountains, being creative, pushing hard is my life. But I always try (at least try) to remember that there are many other different things in life too.
L0: Alpinism is sometimes either considered a super specialised activity, for a select few. In Austria it seems totally quite the opposite: many young strong climbers are extremely active on a number of projects. What is the key for this? Is it simply due to a different cultural environment? How is it possible to encourage the next generation of alpinists?
This is one of the better questions that I get asked by journalists. It’s true, that it’s much easier to make a living from mountaineering than from sport climbing. This is because if you go mountaineering you will always have a story to tell. In sport climbing not so much. Being a strong alpinist means that you need to be strong in many different disciplines and that you need to be able to combine them all and capitalise on everything exactly when it’s needed on the expedition D-Day. You also need to have a special mindset about taking risks and being super exposed out there in the wild. Like I can’t tell you how it feels to climb 9b, then nobody else, except those who experienced it already, can tell you how hard it is to be in a bivy at 7000m after many days of hard alpinism.
On the other hand, it is very easy to tell if somebody is a really strong rock-climber. You just watch him climbing at the local crag and you immediately have the answer. But to determine how strong an alpinist is, it’s a much harder thing to do, because he would normally climb in the high mountains or in some remote area without any people watching him.
And yes, there are big differences between the alpinists out there. Some are doing good stuff but never pushing too much. And some tole to talk more of it rather than actually being in the mountains. But there are a few, who are really strong. Look to Slovenia, Italy, France, Poland, Spain and Switzerland. It’s not only in Austria. And those who are really strong have also a certain level in sport climbing, in bouldering, ice climbing or whatever. So, at the end of the day, understanding how strong an alpinist is, is not that hard after all. 😉

L0: How do you relate to fear? How do you handle it before, and during your most dangerous ascents? Are you in total control over irrational thoughts?

Fear is something that is really important. There are days when fear is a major topic, but there are other days when you are simply fearless. In general, I can easily handle fear. Or I would say, if I feel fear, that means that it’s not the right moment to do something on the edge. It is pretty much the same thing during free solo climbing. If I think of a project with fear then it simply means that the right time for me has not yet come. This game is all about waiting for the right moment. Only at that moment, you will be able to achieve something great and unique.

L0: what is your relationship with sponsors?
The North Face is the ideal partner for me. The collaboration is casual, no pressure, really nice cooperation. We also implement one or two projects together per year. If I have something big planned, I pay the costs out of my pocket, if need be. Then I relinquish any rights and can do what I want with the photos and videos so that I stay free and flexible. If you let everything you do to be financed by a company, then, technically speaking, you’re just taking on a job. If you bear the expedition costs yourself, then there’s no one to meddle with you.
L0: ok! Do we have time for a couple more questions?
Actually not! It is midnight and I have a plane to catch tomorrow morning at 06.30 AM for a climbing trip to Ethiopia. So I’d better start packing my bags and gear!!
For more news and updates you can follow Hansjörg Auer on his Instagram, Facebook or Twitter accounts. Do not forget also to check his website, packed with a lot of interesting stuff and with a preview of Hansjörg’s latest book Südwand.