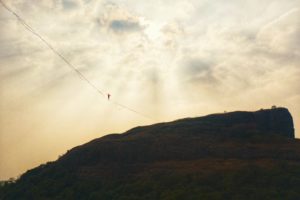 This three-day highline gathering marks a triumph for slacklining in India and offers a vision for adventure-sport communities.

India’s slacklining community is enjoying steady growth despite ongoing challenges in the form of difficulty obtaining sources of funding and land use permits. This January saw a major triumph despite challenges in the ongoing effort to grow slacklining in India: The Great Indian Highline Gathering, a three-day celebration of the sport that welcomed participants ranging from first-time enthusiasts to accomplished international athletes.

The GiHG marks a notable milestone in the development of India’s slacklining community, not least because it reflects the challenges (and perhaps advantages) of niche adventure sports. The barriers to entry in slacklining—an activity that at its simplest requires an appropriate line and two points of rigging—indicate the broad accessibility of the sport. Slacklining in India began in the parks of metropolitan areas, and only with the rise of social media and international marketing did a burgeoning community develop. Ten years after the first wave of slackliners rigged loose lines among city trees, the Indian slacklining community now boasts growing numbers of participants and strengthened footholds in the international circuit.

David Sjöström, a Scandinavian athlete and slackline record holder, catalyzed the project with his initial goal of breaking the India Highline Record. Sjöström contacted the Slackline India Association, an organization aimed at developing a national slackline community, and offered to enlist ten world-class athletes while providing the equipment necessary to rig the record-breaking line. Slackline India Association (SIA) took on Sjöström’s initiative and extended it, designing a three-day gathering catered to community growth and appreciation for the sport.

In India, gatherings around adventure sports face a logistical maze in the way of land use restrictions and difficult-to-obtain legal permits. Adventure sport gatherings pose a tremendous risk by the nature of inherent risk to participants, and community-driven events can render liabilities opaque. SIA circumvented these issues through a partnership with the Shivdurga Mitra Lonavala group, a well-connected climbing and rescue community familiar with the area and the intricacies of local permissions.

The Slackline India Association is a legal, not for profit entity with no commercial sponsorships. Organizers of the GiHG relied entirely on volunteer work, incentivized by a passion for the sport and the shared goal of developing India’s slacklining community. As Kshitij Mittal, a co-organizer of the event puts it, “since slacklining is not a money-making initiative and not as commercially popular in India as in some places around the world, the critical aspect to something like this getting organised involves the entire community coming together as one entity with the common objective of growing the sport of slacklining and promoting India as an international adventure sport destination.”

With help from the Shivdurga group, organizers secured permission to host the event at the Duke’s Nose, a well-known slacklining destination named for its geographic resemblance to the Duke of Wellington’s profile. The Nose is a 300-meter cliff jutting above the Mumbai-Pune highway. Eleven highline rigs were already onsite, established by crews over the years. The GiHG saw the addition of a new line: the record-breaking 750 meters, stretched high above the community campsite. This process alone took three days of work carried out by over thirty volunteers.

Without the expertise of the visiting highliners and the savvy of the Shivdurga Mitra Lonavala Group, organizers reflect, the goal would not have been realized. Yet by sundown on the third night, the highliners began their first attempts. Ronan Kemp, a French athlete guided by only his headlamp, became the first highliner to set off and complete the line. After Kemp’s “send” (a full completion without falling), he dubbed the line “Beware of the Flying Machines.” Aside from focusing on the line itself, the highliner had to be wary of helicopters that hurtled to and from a nearby naval base.

Slacklining may be an individual sport, but it is not a solitary one. Two hundred feet above the ground, a highliner can hear the echoes of supporters cheering from below. In the darkness, calls like “Meep,” “Yeepa,” and “Yewww,” may be the only reminder of a campsite far beneath the line. On a 750 meter highline—a walk that can range from 40 minutes to two hours—the voices are beacons of support. Navin Torres, a co-organizer of the GiHG with the SIA, describes watching Kemp cross the highline from hundreds of meters below: “His walk was so stable that at times we couldn’t tell the difference between his head torch and the stars.”

After Kemp, several international athletes completed the 750-meter line without falling: “sends,” in the slacklining world. Among the athletes to complete the line were India’s own Sumanth Kumar, Wasim Abbas and Samar Farooqui.

Initially devised to offer climbers and boulderers a ‘rest-activity’ between endeavors, slacklining does not immediately lend itself to the sensational titles and record competitions that some other adventure sports enjoy. Compared to more developed sports like surfing or mountaineering, slacklining lacks the media attention that gives way to sponsorships, funding, and notoriety. Yet while the lack of commercial initiatives poses some challenges, it also introduces an advantage in terms of the sport’s culture. The appeal of slacklining is in its “flow,” the characteristic state of balance, focus, and adrenaline that makes for success.

Flow proved a defining element of the GiHG. While some athletes were drawn by the record-breaking highline opportunity, most attendees (the event saw over 200 altogether) were engaged in workshops conducted by visiting flow artists and experimentation on the six other highlines rigged around the Duke’s Nose. When a group of kids from a local school arrived to witness the event, they practiced on slacklines drawn along the ground.

A highliner balances among beams of sunlight. Photograph by Smiley Kfir Amir.