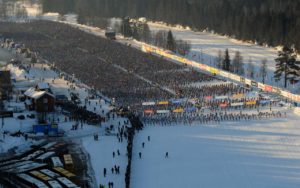 From being a full-time student to running 170km around Mont Blanc, 22-year-old Oskar Henriksson pushes both mental and physical barriers.

Like Venezuela’s Adrian Solano who was dubbed the worst skier alive last week at the Nordic world ski championships, Swede Oskar Henriksson wasn’t put off from skiing without real snow this winter. Roller skiing on student city Lund’s streets in south of Sweden and doing laps on a 400metre artificial snow track, he is ready to tackle the longest cross-country ski race in the world, Vasaloppet.

On long matchstick-looking skis, he and almost 16,000 skiers from all over Sweden, Norway, Germany and 40 other countries will hit the tracks today, March 5. They face hours of long gliding strides and tough poling as they make their way from Sälen to Mora. Record breaker Jörgen Brinks mastered the 90km track in 3:38 in 2012 and Oskar aims to beat his own Vasaloppet record 5:03.

The smell of sweet crepes at the checkpoints won’t slow him down. With water, sports drinks and gel in his backpack, he will tackle hills, bad tracks and burning muscles. But the longest cross-country ski race won’t be as demanding as the slippery, muddy, steep and long races that tend to catch his attention.

Once, at an ultrarunning race in north of Sweden, he got water in the shoes that wouldn’t dry. “My toes turned into raisins with chafes between them,” he says.

Despite pain and discomfort, he completed the race on shoes that were falling apart: “The soles fell out,” he says and adds “but that was after the race.” And toenails have also fallen off during competitions across Sweden and around the world. He spent new year’s eve in Hong Kong, running the Ultra Trail Tai Mo Shan. And on August 26, he undertook one of the most famous trail races in the world, Ultra-Trail du Mont-Blanc.

“I started in the evening and ran for two nights and one day. It was tough,” he recalls “I was awake two whole nights and couldn’t think straight afterwards.”

The astonishing landscape kept him going: “You always want to get around the next corner to see glaciers and other cool things,” he says. And with a lot of broth and orange, but no sleep, he covered the 170km in 39 hours.

Like one of the most accomplished ultrarunners and skiiers in the world, Nikki Kimball, most ultrarunners have been doing this for a long time and he rarely meets athletes his own age at races. His circle of friends are mainly runners and roller skiers: “It’s not that I go out partying that much or do other student things. I have a lot of friends that also run or do roller ski. You must prioritise what you enjoy the most and I have chosen sports. That’s my thing.”

He squeezes in 15 to 20 hours on the tracks every week between geology classes and for him, planning is key to finding the time to do it all: “It’s a great interest and I think it’s good to have something else, then just studies,” he says.

And running can have its advantages: “When you are out running, just exercising, you’ve got a lot of time to think. And I often come up with the best ideas when I’m running,” he says “so when you are studying for an exam, it’s good to go for a little run.”

Today, when he heads out in the morning breeze, it won’t be on a little run, but the 93rd Vasaloppet.