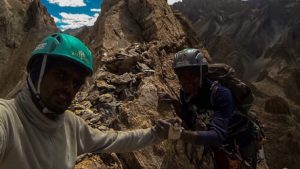 Samsara is Nirvana is a 17-pitch big wall climb rated 7b/+ (5.12b/c). Located in the Kharnak Gorge, in Ladakh, it ascends a steep, 750-meter tall limestone wall, at over 4,000 meters in elevation. The late Swiss alpinist Giovanni Quirici, who died on the Eiger in 2011, made the first ascent of Samsara is Nirvana along with Guy Scherrer, Phillip Chabloz, Claude Chardonners and Elie Chevieux in 2007.

Ever since then, the pitches have lay in wait of suitors seeking the second ascent.

Kumar Gaurav, a 23-year-old from Delhi, was just the guy for the job. He made his first attempt on the route last year. He and his partner climbed until the 12th pitch, where Gaurav took a large fall. He broke a bone in his palm, and doctors told him he wouldn’t be able to climb for the remainder of the year. “But I always [had] the same thing in my mind,” he says. “‘I want to climb this big wall.'”

He spent the year bolstering his other mountaineering skills, unable to do any technical rock climbing because of the plaster cast on his hand, but all the while preparing for his return to Samsara is Nirvana.

This season he was ready to go. Over the summer, Gaurav climbed Stok Kangri (6,153 m), King Yatse 1 (6,401 m) and Kang Yatse 2 (6,250 m), all in alpine style. While great climbs in their own right, they were just warm-up for Gaurav: “My motivation [was] always the same. I wanted to finish Samsara is Nirvana [at the end] of my trip in Ladakh.”

In early September, Madhu CR, a 25-year-old from Bangalore, joined Gaurav for his second attempt on Samsara. Their first two days were discouraging. Intermittent rain kept the wall slick, and the slabby first pitch wouldn’t yield to their efforts. On day 3, Madhu CR pieced pitch 1 together with new beta, giving new hope to the team’s prospects. Each night the duo descended to the ground to sleep before jugging fixed ropes up to their high points the next morning. On day 4, they pushed the ropes up to the base of the 12th pitch, and decided to bivy on the wall that night, committing to one final push. The next day, September 5, they blazed upwards and reached the summit at a civilized 2:00 pm.

Gaurav and CR’s was the second free ascent—which also happened to be the first Indian ascent—of Samsara is Nirvana. The duo’s climb was documented by the Adventure Sports Channel 4Play.

Gaurav says the climb was a “dream come true.” Where or what he starts dreaming of next remains to be seen, but with his ambition and skill, it will likely push Indian big wall climbing to even greater heights.

The mountains are calling! Try your hand at climbing Stok Kangri, just like Kumar Gaurav, with The Outdoor Voyage!