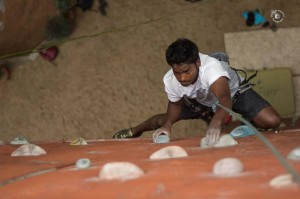 I love two things – climbing and training others.

Mani has been consistently making waves in international climbing competitions with achievements in paraclimbing championships internationally for the past three years. Since India does not have a category for paraclimbers, Mani competes here with able-bodied climbers, and despite his disability, is considered one of the top ten climbers overall in the country today.

Coming from a disadvantaged background, Mani was diagnosed with polio in his right leg when he was five. In the normal course of things he would never have entered this path in life. But at the age of 15, Mani was introduced to climbing at an adventure camp for disabled people. It was, as he puts it, ‘love at first sight.’ No one in his family had even heard of rock climbing as sport. It came rather as a shock to his parents when Mani declared that he was going to pursue climbing professionally. They expected him to work towards becoming a mechanic or finding a similar “stable” profession more becoming to someone from his background, than climbing. Mani has not allowed his physical disability and financial constraints to come in the way of pursuing his dreams.

His greatest achievement came in 2012 when he was able to travel to France to compete in the IFSC Paraclimbing World Championship, held in the Bercy stadium in Paris. Mani won the gold medal. When he is not competing, he works as an independent climbing coach in Bangalore.