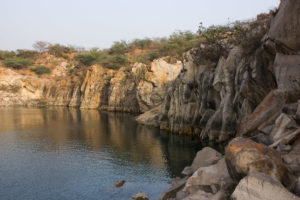 How Delhi locals are overcoming fear-mongering and illegal mining operations by venturing outdoors, volunteering and ensuring that a hidden swimming hole in Delhi's backyard, the Asola Sanctuary, remains pristine and blue.

Though most of us will never act on it, I believe at some point we all have an impulse to go away. What happens when that impulse becomes an inner directive?

Upon looking at the geological makeup of the range on Google maps, the deserted wilderness struck us as something unbelievable.

Marc’s impulse to leave his country had landed him in India almost 14 years ago. Having been brought up in the Pacific Northwest, he spent most of his time outdoors. He loved scouting the unknown, and trying new things. He often speaks about his time spent exploring the backcountry in the state of Washington. Spending days around lakes while searching for life outside of our own species excited him the most. He’d often pick still water mollusks and bring them home.

Having resigned to a life in one of the most polluted cities in the world for the last seven years, Marc and I lamented the lack of outdoor activities. Most people living in Delhi seemed to be more interested in going to the mall rather than exploring the outdoors. Aside from the fact that it wasn’t in our culture and was new to people, it occurred to me that there was also a lack of education and appreciation.

We had spent most of the winter and spring going to Sanjay Van – a forested area within the Aravalli range. The boulders in Sanjay Van had widened our perspective on the scope of an outdoor scene in Delhi. But as soon as we felt the sweat from Delhi’s unforgiving heat, we felt the need for a body of water. The closest city we could have thought of was Rishikesh, however, the presiding thought of a 6-hour long drive made it less compelling.

Is Asola Wildlife Sanctuary a Mirage? Too Good to be True?

On the contrary, and on one uncomfortably hot Saturday, Marc stumbled upon Asola Wildlife Sanctuary on his phone; a forested region scattered over the south of the city of Delhi, along the Haryana border – the Faridabad and Gurgaon districts. A ride just 40 minutes away from where we lived. The search had also led us to sources across forums with fear mongering reviews where a moniker such as “Death Valley” was intermittently used to describe the sanctuary. While Marc appeared least concerned I couldn’t get over my preoccupation with Faridabad being one of the most crime-ridden cities around Delhi. Furthermore, whenever I spoke to others about it, I was repeatedly asked to err on the side of caution. However, upon looking at the geological makeup of the range on google maps, the deserted wilderness struck us as something unbelievable.

In a city with more than 17 million people, we were shocked to see how remote the sanctuary felt.

Come Saturday, Marc had already made up his mind whereas I was a bit apprehensive in the beginning and kept reminding him of the dangers of visiting such a place. It wasn’t until a 45-minute ride and then, walking for another 20 minutes on the deserted trail, that my perspective on Asola began to change. Although I was still a bit skeptical, the seemingly endless relief from having found a swimmable lake in Delhi had renewed not only his sense of appreciation for the capital but mine as well.

Signs of Wildlife All Around Us

Following our hike on the rutted track, we immediately registered the first sign of fauna around the region. Seven-inch-long hollowed quills made us cognizant of the presence of Asiatic porcupines in the region – an animal I thought existed only in North and South America. Peacocks and peahens were a common sight and so were blue bulls. What wasn’t common was the sudden appearance of a hyena that went off the trail as soon as it became wary of our presence.

In a city with more than 17 million people, we were shocked to see how remote the sanctuary felt. As I walked further out to a banyan tree, a gentle warm breeze swept over me and I began to follow up on my findings prior to entering the sanctuary. Once an illegal mining operation facility, Asola had been amongst the most coveted regions for construction businesses avariciously excavating red sand, stone, and other minerals. It wasn’t until 1991 that the Government decided to put an embargo on the mining operations and declared it a wildlife sanctuary. Over time, the deep-pits around the sanctuary have filled up with water and have morphed into lakes with an ecosystem healthy enough to sustain life.

Upon reaching the blue lake, we were surprised to spot a clear body of water. The oasis appeared so blue in colour that I was mesmerized. Unfortunately, we found beer bottles and pollution strewn across the beach. Marc was visibly upset and immediately began cleaning.

Read Next on The Outdoor Journal: 21 Marine Sanctuaries That Are a Step in the Right Direction.

We started visiting every week. The blue lake, despite its deadly reputation, was popular amongst the local kids. Soon enough some of the kids spotted us cleaning the shore and decided to volunteer. It wasn’t long before we had a group to ourselves where we discussed ways in which we could clean the beach. Within a short span of time, our objective was clear; before we left to put up with our own challenges, we had to clean the shore for at least 30 minutes. And thus, with each visit, our pile of garbage kept getting bigger and bigger and the local kids who we’d befriended became more sensible in their approach to the environment.

Why We Fear “Death Valley”

“This lake demands a sacrifice every year.”

On one hand we had Asola, home to one of the oldest mountain systems in the world, and on the other, we had the familiar bad habits of those littering the environment. How much longer can it sustain itself without the intervention of those who understood its ecology? Who understood the importance of preserving an ecosystem that not only supports life in it, but around it. For far too long, its image had been smeared with irrational fears and superstitions. Over time, we learned that the moniker, “Death Valley” was mostly related to drowning where amateur or non-swimmers from the local village had accidentally drowned. One time, Marc, along with some local friends had to rescue an adult who had jumped into the lake without giving it a thought. Following his near-death experience, a conversation broke out and we overheard a person from the group saying, “this lake demands a sacrifice every year.” It was sad to register how deeply rooted our superstitions and irrational fears are and how much impact they have on our perception of our surroundings.

Having said that, so long as we can attempt to think beyond ourselves and be a little more considerate of our surroundings, our appreciation of nature will grow. However, it demands a conscious effort. The sanctuary itself has, over time, transformed into a healthy ecosystem and set the tone. Our obligation would be to expand upon it. While Marc remains committed to restoring the beach, more friends have joined the cleaning bandwagon. This paradise of ours that we have just set our foot in has sheer cliffs extending above the blue surface of the water. High rock faces are scattered all across the sanctuary along with several diving spots. A more ideal setting for outdoor enthusiasts or adventurers couldn’t have existed in Delhi’s backyard.

Read Next on The Outdoor Journal: How the Plogging fad turned into the missing piece in one of my life’s missions.