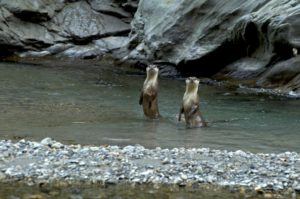 This is a story of Tana Tapi's struggle to conserve Pakke Tiger Reserve in Arunachal Pradesh in Northeast India.

Tana Tapi is in a tough spot. He has the enormous task of protecting 862 sq. km of mostly inaccessible, and difficult eastern Himalayan wilderness. His job is made more difficult by the fact that some of the people that log and hunt inside these forests belong to the same community as him, the Nyishi tribe of Arunachal Pradesh. This general area bordering Assam is also one of India’s deforestation hotspots where logging networks are fuelled by larger market forces and militant networks. It was his arrival as District Forest Officer (DFO) in 2004 that kept Pakke Tiger Reserve from becoming another ‘empty tiger forest’ of northeast India.

Pakke Tiger Reserve is an 862 square kilometer reserve that lies in the East Kameng district of Arunachal Pradesh in northeastern India. It was declared a tiger reserve in 2002.

Pakke’s past hangs heavy with its dark history. Once a game sanctuary, it played host to gangs of poachers that came from elsewhere and almost obliterated its unique wildlife; tuskers, serow, pangolins, otters, the endangered white-winged wood duck, among others. Loggers had a free hand and hunting tigers was a sign of bravery among the resident communities. The rivers bore signs of dynamite fishing and scores of great hornbills were slaughtered for their meat, feathers and impressive beaks.

The turnaround began in 2004, just two years after Pakke was declared a tiger reserve. It has since become a conservation success story not only for Arunachal Pradesh that has not seen such concrete action in other protected areas, or the north-east where conservation is a difficult task, but for the rest of India.

A 12-year saga kick-started by Tana Tapi and his trusted band of anti-poaching staff have made the unimaginable a reality.

It is not a rare sight to see groups of Special Tiger Protection Force (STPF) personnel meandering through the reserve’s evergreen and semi-evergreen, subtropical forests and floodplains. Always armed with either rifles or daos (traditional daggers), they patrol vast tracts of difficult terrain, cutting paths through unexplored areas to intercept poachers that might still be operating inside. Nothing escapes the sharp senses of the STPF. A breaking twig, a sudden splash, or even a slight movement in the shadows that trees create, is worth investigating. It could be a person hiding, an elephant about to charge, or it could just be a civet looking for a snack. In a job where many men have fallen to poachers’ weapons, there can be no half measures. They must know the landscape they work in better than the poachers. The southern areas have been extensively patrolled and secured by Pakke’s anti-poaching teams, which mainly comprise of people from the Nyishi community. But Pakke needs Tana Tapi as there is more to be done. In the north, which has dense vegetation and hilly terrain, people are hostile to the tiger reserve. Tana Tapi would smile sometimes in exasperation that wherever he went became a tiger reserve. Before him, most residents had not known of the existence of the reserve and would hunt and log in the area.

There has been intense opposition to the DFO’s management of Pakke in the northern villages. Villagers of Sebba have, in the past, put political pressure against demarcating the boundary of the tiger reserve. In Lumta, Yaro Techi, a remarkable woman who has been known to bring down a full grown male mithun (domesticated gaur) by herself, would have an allergic reaction whenever she heard the DFO’s name. She would accuse him of trying to steal her land to make it part of Pakke. In Sochung village, Nana Nabum, a pastor and a black belt in karate, refused to allow Tana Tapi to take a photograph of the village as he heard rumours that the village would fall within the tiger reserve. A string of awareness drives that started in 2007 have brought about some change. Today Yaro is the chowkidaar of the Lumta anti-poaching camp and Nana, who is now part of the STPF, conducts sermons on wildlife conservation. Change is slow, but the change-of-hearts are memorable.

The staff recall a time when political pressure saw Tana Tapi suddenly being transferred out of the reserve. It was the year 2008, and Pakke almost lost its lifeline. Instances of poaching shot up, there were attempts to steal bears meant to be released into the wild, and domestic camp elephants were shot. The forest staff were demoralized and it looked as though all the good work done so far would be undone. Luckily, nine months later, Tana Tapi returned and Pakke slowly got back on its feet again.

With affection and respect, the DFO’s staff recall how his unpredictable forays into the forest in his gypsy, elephant back, motorbike or bare-feet have kept the staff alert and on their toes.

The number of people employed grew from 25 to 140. These are the same staff for who he personally makes wedding preparations for and presides over the exchange of vows. When his forest guard Karo Tayem was killed by a wild elephant, he has been a pillar of support to his family. On his morning walks he personally goes to inspect a site where he is helping the family build a house of their own.

Pakke's Progress
The patrolling roads and paths inside the reserve were up scaled from 13 to 92 km, and where there were only two anti-poaching camps before, today there are 32. Over time, he garnered support from some of the resident Nyishi community and helped facilitate the Ghora Abhe (village father) society, where the Gaon burrahs (village elders) enforce customary laws to protect the buffer area of the tiger reserve. The hornbill nest monitoring program, where ex-hunters have now become protectors of hornbill nests, is recognized widely. Convincing a tribe known for its hunting prowess to be partners in wildlife conservation has not been easy.

Protection in the reserve has come a long way in the last decade. Patrolling is now complemented with camera-trapping, which is now an integral part of Pakke’s activities. There is also a best-camera-trap-image contest and one for best patrolling staff, to keep the morale of the staff high. The cameras are sometimes stolen by people or toyed with and crushed by elephants. But images of clouded leopards, marbled cats, and tigers roaming free in one of the last true bastions of biodiversity in the northeast, is a cause for celebration.

Though Pakke has broken free from the darkness of its past, it remains fragile, relying heavily on the tenacity and courage of Tana Tapi and his team of anti-poaching staff, residents and researchers. Only time will tell if Pakke, arguably one of the most exciting tropical jungles in the world, can leave a conservation legacy for the country to embrace and replicate. Ram Alluri is a documentary cameraman and filmmaker working on wildlife and conservation films, often covering conflict situations. His interests mainly lie in telling stories about people, wildlife, and their shared spaces. An opportunity to camera-trap for small mammals inside Pakke Tiger Reserve introduced him to the reserve’s incredible conservation story, which he looks to document over next few months. Nandini Velho is a wildlife biologist working on the human-dimensions of wildlife management in India. She also works closely with the forest department staff and park managers and outreach initiatives in and around Pakke Tiger Reserve. Pakke is her second home of sorts with the close bonds that she has formed there ever since her undergraduate days. Pakke has also played a pivotal role in shaping her writings, ideas and   collaborative efforts towards research and conservation as a wildlife biologist.