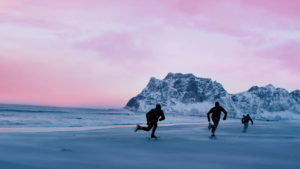 Which is how he eventually came up with the idea of taking hardcore skateboarders out of the city—to ride on sand on a freezing coast.


“When you surf in Norway, you can actually start on the mountaintop, snowboard down and then you can just change to wetsuit and go surfing. So the only thing you miss is skateboarding in between, you know,” laughs Jørn Nyseth Ranum.

The in between also happens to be skateboarders worst enemies: sand and ice. But on a freezing winter day, the harsh environment’s potential for the usually urban sport opened up an idea for the filmmaker. He and his mates hit the waves on their surfboards just as a storm kicked in, sweeping the beach with big waves: “During our surf, it was super cold, and when I went back up on shore, I noticed that the sand had turned rock solid. It was just super hard,” he says. “And then the first sparkle of the idea came. I started visualizing how it would be to skate on this surface and on this environment.”

He knew that some skateboarders had triumphed on a rocky surface in Utah, but skating on a frozen beach was something different: “I think that most hard core skateboarders spend more time in the city than they do in nature. But I’m the opposite. I spend more time in nature than the city,” he says “So maybe that gives me a different point of view than people that skate a lot.”

And the skateboarders he talked to were skeptical: “They were like, ‘yeah it sounds cool, but I don’t think it is going to work,’” he says, adding with a laugh ”So I really felt like I at least had to go and try.”

NORTHBOUND | Skateboarding on Frozen Sand 4K from Turbin Film on Vimeo.
And two years later, a storm hit the coast once again while he was in the area, creating the same scene he had stumbled upon earlier. With the idea of skating on the beach still in the back of his mind, he quickly grabbed his board and tried it out.

“It was really after testing it that I got really stoked on the idea. And actually wanted to do something about it,” he says. “I thought it was a great idea for a film, to see urban skateboarding crash together with nature and kinda explore what happens.”

Some of the best skateboarders in the country, Hermann Stene, Karsten Kleppan, Henrik Lund and Didrik Galasso, got onboard and headed to the remote beaches of the Lofoten Islands, surrounded by mountains. Jørn thought it was cool to invite Norwegian skaters that had some connection to the landscape, even though most of them had never set a foot that far up north. And none of them had done tricks or flipped the board on a beach in +1 to -12 degrees celsius before.

“We had some swearing and they had to take some walks sometimes. I think it was really frustrating for them” Jørn recalls. “When there is a trick that you’ve had in your bag for years and you can basically do it with your eyes closed and then you come to this place and you have to have 20 times.

With poor grip on the board and stiff trucks (that usually help them turn and adjust the board), they slid on an upside down boat and skated on a mini ramp made of frozen sand. The days were short with sunset-ish light, storms and constantly changing weather, which the project depended on.

The skaters and crew had been on standby the whole winter, waiting for the cold and stormy weather to kick in: “We had plans with the whole crew and all the skaters so that I could call them up and they could just jump on the plane the next day and come up,” says the filmmaker, “It was kinda scary to push that button, make the call and say that now we’re doing it, because the weather can always change.”

They spent ten days on set, but heavy storms and bad weather thwarted their plans: “For filmmakers, it doesn’t always go as you intend and there’s always things that turn out differently and you just have to make it work,” says Jørn, adding, “When I was in film school, that was one of the things that we learned. That we should try to be problem solvers instead of problem makers.”

Cool sunset lighting, stormy shots and frozen eyelashes were some of the silverlinings that came with the uncooperative weather.