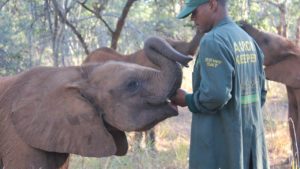 The Lilayi Elephant Nursery: The Story of One Orphan, and 11 Years of Conservation.

The Orphanage provides a sanctuary for defenceless calves, who are the victims of poaching, human conflict or, occasionally, natural abandonment. The catalyst was a single elephant called Chamilandu.

A one and a half-year-old elephant is left alone and helpless when her mother is shot dead by poachers. The orphan calf is taken to what is now the Game Rangers International, Kafue National Park Release Facility to be raised. Healthy, but understandably traumatised, Chamilandu, as she was named, struggled to come to terms with the loss of both her mother and extended family. Suffering nightmares that had her screaming aloud in her sleep, it took a great deal of love and attention from dedicated keepers to give her the reassurance she needed to adjust to her new life.

Developing bonds of trust… Njanji and her keeper

In the intervening years, Chamilandu has grown into the matriarch of the orphan herd. Mothering and comforting the younger orphan calves as one tragedy or another has brought them to the orphanage. She has recently started to demonstrate her desire to live independently in the bush; going on longer and longer forays alone, away from the release centre. Seen interacting and mating with a wild bull in the park, a positive sign that she is ready to create new ‘family/friendship’ bonds and is preparing herself for a life in the wild… the ultimate goal of her rescuers all those years ago.

We first saw Chamilandu on a game drive in Kafue National Park, Zambia’s oldest and largest national park and one of Africa’s wildest. We were on our way to the Release Centre to see the orphan herd coming in for their lunch break after a morning in the bush. The group were close to the road and the keepers were tucked out of sight, allowing the small herd to graze freely, but still be under their protective surveillance. Chamilandu, wearing radio collar in preparation for her anticipated ‘move’, was in a playful mood. Getting closer and closer to us, shaking her head from side to side in a slightly comical fashion, as we slowly reversed the car. Eventually slipping past the herd we went ahead to await the groups’ arrival.

one elephant killed every 15 minutes!

Met at the Release Centre, we were first shown the ‘kitchen’ where bottles are filled with the correct ‘recipe’ for each youngster and then escorted to the main Elephant Boma from where we could see the orphans ambling ‘home’. ‘Home’, an enclosure of about 10 hectares, is located on the bend of a river and fenced to make it predator proof. Once the elephants got close to the boma, they picked up speed and were soon clamouring at the gate, to be let in for their bottles and piles of pellets that form their lunchtime feed.

Elephants in Africa are under serious threat, primarily due to large-scale poaching for ivory and also as a result of conflicts arising from elephant/human interactions. It is estimated that 25,000 elephants are being killed in Africa every year… this works out at approximately one elephant killed every 15 minutes!

Having visited the older orphans in Kafue, I was keen to visit The Elephant Orphanage Project’s Lilayi Elephant Nursery, which is situated on a 650-hectare game farm on the outskirts of Lusaka. When under the age of three, young elephants are extremely vulnerable and dependent. Most will not survive without both their mother’s care and her nutrient-rich milk. The first port of call for any orphan rescued anywhere within Zambia, is the Lilayi Elephant Nursery, and it is here that these fragile babies are looked after twenty-four hours a day – a milk dependent orphan requires a bottle of its special formula every three hours! Trained keepers care for and watch over their charges constantly; taking them on daily ‘bush walks’, feeding them and staying close at hand to provide reassurance when the babies are in the stables at night. These keepers play a vital role in the emotional and social recovery of the young elephants, and become the ‘mother figures’ the babies desperately need. Elephants are tactile and highly sociable and the keepers become the orphans’ ‘new family’, maintaining physical contact with the babies, talking to them and showing them the same affection their wild elephant family would. As the orphans gain more confidence, human contact is gradually reduced and they are encouraged to turn to the other elephants for comfort, rather than the keepers. This is an important part of their rehabilitation.

The orphans need to be watched over at all times; they need to be covered, with blankets when cold, rainwear when wet and natural sunscreen (like a mud bath) when out the sun, for the first few months of a baby’s life. Baby elephants are difficult feeders and their minders need endless patience to encourage them to drink sufficient milk for growth. Like humans, baby elephants also need toys and stimulation, and so distractions and entertainment have to be built into their daily routine. An elephant will only thrive if happy.

As soon as calves can be weaned from milk (approx 3 years old) they are moved from Lusaka to the Release Facility in Kafue National Park, where they join older orphaned elephants. Here they learn to live more independently and spend much of their time wandering freely through the bush. The Kafue Release Facility is adjacent to the ancient Ngoma Teak Forest where there is a 1,000 strong local elephant population, maximising chances for the orphans to integrate with other elephants and gradually move back into the wild.

12th June 2018 and the latest rescue baby joins the Elephant Orphanage Project, with one of their most rapid response rescues to date. In the early hours of the morning, an alert was raised that a six-month-old calf had been found abandoned in Livingstone. The baby was quickly rescued and transferred to the nearby ‘Elephant Café’, where it was stabilized, fed, watered and calmed by the presence of the other elephants (who are resident at the ‘Café’). Meanwhile, the team in Lusaka worked rapidly to fly a purpose-built crate down to Livingstone. The baby was then mildly sedated and crated, ready for her upcoming journey; a two-hour flight to Lusaka followed by an hour-long drive to the Elephant Nursery, where she was safely tucked up in bed by eight-thirty that night.

The little calf initially known as #43, in honour of being the forty-third elephant assisted by EOP, has now been renamed Lufutuko (Tuko for short), which means ‘survivor’ in Tonga, the local language. She is still very vulnerable and traumatised. Safely in the orphanage, she is getting to know her keepers and being regularly fed specialized milk formula. Like all the young elephants at the orphanage, she has a long and difficult road ahead to overcome the loss of her family, learn how to integrate and socialize with other elephants and ultimately grow into a healthy adult who will hopefully ultimately walk free.

It costs a lot to raise an orphan and give them a second chance at life… a lot more than you might think… from a rescue, to release and beyond, including post-release monitoring and research. Rescues alone can vary widely in cost depending on the area the calf is found. In some instances special vehicles, boats or even planes need to be hired, add to that scout and tracker fees, then vet fees, which can include quarantine, sedatives, blood tests and various medications and don’t forget the cost of ‘manpower’. An ‘average’ rescue can be in the region of US$2,500. And once an orphan is rescued costs continue to mount. With a staff of 27 at the Kafue Release Facility and another 17 at the Lilayi Elephant Nursery, wages are not an insignificant cost to be factored in. Feeding, veterinary, maintenance, communications… the list goes on. There are 18 orphans currently being cared for between the two facilities, each costing approximately $35,000 a year… the Elephant Orphanage Project has an operating budget in the region of $600,000 a year, which is an enormous struggle to secure.

The Elephant Orphanage Project was established in 2007, with critical and on-going funding from the David Shepherd Wildlife Foundation, the International Fund for Animal Welfare (IFAW) and the Olsen Animal Trust, with the mission of rescuing, rehabilitating and releasing orphaned elephants back into the wild. The Elephant Orphanage Project is part of a conservation initiative developed and operated by Game Rangers International, a Zambian, non-profit NGO.

You can visit the Lilayi Elephant Nursery, which is just a 35min drive from the centre of Lusaka any day of the year between 11.30 and 13.00. At 11.30 a staff member gives a short talk about the orphanage and you can visit the viewing deck which is an ideal vantage point for watching the elephants feed and play. Note that given the ultimate goal of releasing the elephants back to the wild, visitors are not permitted to touch the elephants. Cost: Adults K50, Children ages 12-18 K20, Children under 12 free. Every Monday entry is free.

If you want to venture a little further off the beaten track, then you can visit the Elephant Orphanage’s Kafue Release Facility in the southern part of Kafue National Park, 12km along the South Nkala Loop from Ngoma (location of the National Parks and Wildlife Headquarters). The closest places to stay when visiting the release centre is Konkamoya Lodge or HippoBay Campsite and Bushcamp info@konkamoya.com

As with all conservation projects funds are always in short supply, any donations can be directed here.