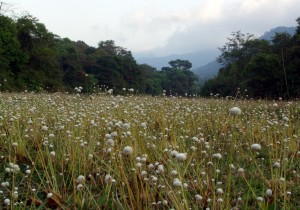 Partly inspired by the Nature Conservancy in the United States, former banker Dr.

Anil Malhotra and his wife Pamela Gale Malhotra have bought tracts of abandoned agricultural land in the Western Ghats and allowed them to flourish as the bio-diverse rainforests they actually are. Now they’re appealing to wealthy Indians to buy up as much land as they can near these bio-diverse hotspots, to restore them to forests and prevent an oncoming fresh-water crisis.

About an hour away from the Tata Coffee Plantations where we were staying, the road turned into a deep valley and the jungle began to reappear on both sides of the now-rutted track. My phone signal died out, the trees grew taller and a deeper green. We were not far from the wilderness sanctuaries of Nagarhole, Brahmagiri and Bandipur. However, between these protected forests lie tracts of land designated as “agricultural” – meaning that forest loss in these areas is allowed; and wildlife cannot move between them.
Some time later we reached the end of the road – a clearing with signs of habitation – we had arrived at SAI Sanctuary, a 300 acre private rainforest that’s been bought up by one audacious couple trying to save the world, all on their own. Save Animals Initiative (SAI) Sanctuary Trust is a study in self-reliance and off-the-grid living.
Watch the official trailer of SAI, a documentary by filmmaker Melissa Lesh

There we meet the Malhotras, who bought land and settled here after years in the US and India. A river runs just below their house, the water is so clean that “you can drink it”, says Pamela. She’d just finished uploading, via an internet connection that they had to get specially installed, a video of Sambhar chasing off wild dogs who were attacking one of the young. We accompany her on a walk to check the Bushnell camera traps in the forest, which capture images of the fauna, some of which is not to be found anywhere else on the planet.
There are hundreds of different indigenous trees and plants—many of medicinal value—as well as threatened species of animals – from elephants, tigers and leopards to deer, wild dogs, jackals, foxes, civets to river otters, the giant Malabar squirrel, snakes and over 300 species of birds.

Anil and Pamela have been passionate about nature since their childhood days. This love carried on in their adulthood, which resulted in their attempting to protect beautiful, wild places wherever they could by buying and conserving them.

Anil first saw the main land in Kodagu in south India in 1991. In order to preserve these lands for future generations, the duo decided to set up a nonprofit charitable trust called ‘SAI (Save Animals Initiative) Sanctuary Trust (SST), which they registered with Karnataka State on the 7th Jan 2002. It subsequently received both an 80-G certification and an FCRA Certification, giving them tax deductible status for donations including foreign funding. The Trust manages the Sanctuary.

Now they are launching an appeal to all wealthy Indians to buy up and reforest as much land as possible around these bio-diverse hotspots to preserve them and expand them.

This letter is a ‘Wake Up Call’ for all CEOs to pay serious attention to the gravest crisis facing India, that is, the fast depletion and disappearance of our fresh water sources, mainly due to deforestation. Our streams and rivers that originate from forests are drying up and even mighty rivers such as the Ganges in the North and Cauvery in the South are less than 50% of their size, mainly due to deforestation in their catchment areas.
My wife and I have set up a private Sanctuary in Coorg, of approximately 300 Acres in Theralu Village next to the Brahmagiri Wildlife Sanctuary.
Our registered nonprofit 80-G approved NGO – SAI Sanctuary Trust – just won the Wildlife and Tourism Initiative of the Year Award – 2014 for Eco-Tourism that protects forests and wildlife. Without wildlife there would be no forests at all as they perform crucial activities such as pollination and propagation of the trees and other flora in the forests. Elephants are a good example as up to 30 species of trees rely on them exclusively for propagation of their seeds since no other wildlife can swallow them whole. Birds are not only essential pollinators and propagators of flora, but also help protect our health. Swallows for example eat over 2000 mosquitoes per bird every day helping to prevent diseases such as malaria, dengue, chickengunia, etc. – diseases now common in cities like Bangalore since the habitat of birds and bats are being destroyed.
A garden city such as Bangalore has no water when borewells are dug up to and over 2000 feet due to the destruction of forests in and around it. With the destruction of the forests has come the loss of our fresh water sources as it is the forests themselves that produce over 50% of all rainfall. This is due in part to the process of evapo-transpiration where underground water is drawn through the roots of the trees up to its branches where it is exuded back into the air as moisture setting up raincloud formation. In addition, the plants and trees of the forest ‘seed’ the air in order to help raindrops form.  When the rainfall occurs, the roots of the trees act as sponges to soak up excess water thereby preventing floods, with this same water being slowly released back into the ground by the trees during the dry season thereby ensuring fresh water year-round.
Hence, no trees means no evapo-transpiration or seeding of clouds for rainfall. No rainfall means droughts such as the ones we have seen over much of India in recent years including Maharashtra, Orissa, UP, Bihar and all of south India. No trees also means no ‘sponging up’ of excess water when rains do fall with devastating flooding being the result.
Climate change and global warming can only be ignored at our peril. We are close to climate warming by 2 deg C. Once the tipping point is reached, water from melting polar icecaps and glaciers will cause oceans to rise a minimum of 20 feet. More frequent and severe weather like cyclones and cloudbursts on the one hand and severe droughts on the other will also ravage our country and the planet as a whole.
In the U.S. the private industry has woken up to this danger and is therefore funding certain NGOs such as Nature Conservancy to acquire thousands of acres of privately owned forest lands to protect these watersheds and the vital fresh water sources (such as streams and rivers) found on them.
Kodagu or Coorg is in the heart of the Western Ghats from which fresh water originates for all of south India. But deforestation in Coorg has reduced the forest cover from 86% in the late 1970s to a mere 16% today endangering fresh water supplies for the entire south Indian peninsula.
Please help us form a Nature Conservancy to acquire critical forest areas with monies earmarked from your CSR budget to be used for nonprofit NGOs to acquire critical forest areas privately owned before they are also cut down. We would be more than happy to assist in identifying such areas – HP and McAfee have recently given millions to the Forest Department to protect elephant and wildlife corridors. However in our opinion giving to the Government may or may not have the desired result. Privately owned forest areas where the landholders can directly manage and protect the lands is the way to go.
We hope to have you visit us personally to see for yourself how critical and urgent it is to save our forests and wildlife. For without fresh water no business nor industry is going to last. There isn’t much time left. The time for Action is NOW.
When we leave our bodies we cannot take the wealth we have with us. But let us at least be able to breathe fresh air and drink fresh water while we are on Earth and in our bodies, not to mention helping to secure a living future for our children and generations to come.
Miracles do happen and if the leading industrialists of India lead the way along with small people like us who have set up a practical model, then India still has hope and others will follow.
We would be more than happy to assist you in identifying such areas – you can contact us at saisanctuary@gmail.com
Sincerely,
for SAI Sanctuary Trust
Anil & Pamela Malhotra