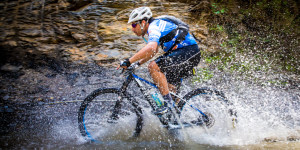 In a country that is slowly getting recognition for action sports, young cyclists Devender Thakur and Shiven from Himachal Pradesh will represent India at BIKE Transalp this July, one of the toughest mountain biking races in the world.

Here’s a look at their journey training in Himalayan forests for the alpine drill.

BIKE Transalp is an annual amateur mountain bike stage race where cyclists from more than 40 countries ride a 520km stretch across the Alps in teams of two. It started in 1998 and is considered one of the toughest mountain biking races in the world.

The two mountain bikers will be going as part of the Hero Action Team with support from Himalayan Adventure Sports and Tourism Promotion Association (HASTPA), an outfit that promotes adventure tourism in Himachal Pradesh, and  is the main organiser of MTB Himalaya. The duo will be accompanied by veteran riders Hinrich Fuchs and Ashish Sood.

MTB Shimla 2016 is a compact version of the oldest race in the country and the big daddy of mountain biking in India – MTB Himalaya. The recently concluded race covered 120km and was power packed with gruelling uphills, picturesque meadows, unpredictable stream crossings, treacherous single trails and downhill tracks.

“The terrain here is so unforgiving”, said Devender who is training for the alpine drill in the Himalayan forests. Shiven, who comes from the Lahaul and Spiti district of Himachal Pradesh has spent a lot of time training in Karnal and Kurukshetra, the two towns where he has mostly lived. Thrilled about the representation, he says, “A rider can’t get better trails than the Himalayas in the world. There they max out at 3000m. Over here, if I go to Kaza in Spiti, I can train at 3500m.”

Devender’s uphill climb started in 2010 when a friend bought him a mountain bike in his native Pangi valley. This tribal village in Chamba district of Himachal Pradesh known more for some of the world’s most dangerous roads had never seen a mountain bike before. Taking advantage of every opportunity to ride that bike, from running errands to taking it out on days his friend felt lazy, the obsession grew steadily. The idea of a bike not falling apart over so rough a terrain and discovering virgin trails in the valley thrilled him. He couldn’t imagine doing it on a normal bicycle.

Not until he had moved to Shimla to pursue further education did he learn about the existence of this sport at a competitive level in the country. “My friends used to laugh at the idea. It was when I met the HASTPA guys, I realised my dream was not impossible”. At first, he decided to go against the will of his parents who expected him to finish formal education and eventually help them at the village farm. Focused effort to back himself up financially, he trained himself for almost a year and managed to finish the MTB Shimla 2013 race at a close second to Shiven who had won in the Student’s category.

Around this time, he decided to enroll himself in a college in Shimla which worked out tremendously well. On insistence of a few students the professors at UIT (University of Information and Technology) Shimla helped him financially. This push backed by his determination ensured that he won all the races that he contested during that year. “I showed my village it was possible”, says Devender. By now he had been spotted by the Hero Action team.

His training started full steam after getting signed on by Hero. Following a fitness regime and getting the nutrition right helped him reach his athletic peak. However this was followed shortly by a hiatus due to a knee injury. As with most post-injury-kickass-comeback stories, the rest is history. He was back as the undisputed winner in MTB Shimla 2014, 2015 and most recently 2016. “Devender’s victory highlights how potential talent could be found in the unlikeliest of places” says Mohit sood, President, HASTPA.

“We will continue to promote mountain biking talent in the country and we hope to produce an Olympian by the year 2024,” he added.

Even until a decade ago, the few riders coming into the country to mountain bike relied on friends to organise small scale events or went the DIY way with  camping gear and handy tool kits. The latent potential for mountain biking has been explored by organisations like HASTPA that recognised the terrain suitable for the tournament. And have the vision to nurture local talent after exposure to the sport. The awareness towards the sport in the country has grown manifold in the last 2 years. Shiven is happy about the sport turning mainstream, getting highlighted in mainstream media and the fact that premium segment bikes are becoming a lifestyle choice.

Devender’s story is opening a new trail in the history of mountain biking in India. His struggle bears testimony to the fact that India has talent just waiting to be exposed to certain sports. Not to mention the miles of undiscovered trails that can act as perfect training ground for mountain biking particularly in northern and north-eastern states. While we keep our fingers crossed for the duo in July, the quality of the course and riders in the country has already started to go up.

Feature Image: A rider from MTB Shimla 2016 at a stream crossing