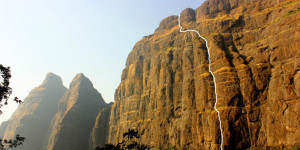 The Second Ascent of Konkankada

In Southwest India’s Maharashtra state is the Sahyadri range, filled with climbing potential. ‘Konkankada’ is situated on the south-west face of the famed Harishchandragad Fort in the Malshej Ghat region. A 2000-foot high cliff stretching out over a mile, it is one of the most beautiful formations in the Sahyadri.

In December 1985, a team of climbers under the leadership of Indian mountaineer Mr. Vasant Limaye first climbed the south face of Konkankada by what is popularly known as the Left Route. It took 17 days. This was the first big wall climb in the Sahaydris, paving the way for Indian climbers to attempt such big routes in the region.

We first attempted this line in February 2012. After retreating from 650 ft up on this route, we realized the difficulties and dangers of this line. Besides the high climbing grade other factors include extremes in temperature, high winds, continual rock fall, few protection opportunities and thus an increased risk of fall, absence of safe bivouac spots, a long and steep approach to the base, rotten, eroded rock sections, no easy exit in case of emergency, the presence of scorpions and snakes and the difficulty in carrying water up the route. Despite this we were determined to return and climb this.

In my opinion, January is the best time to attempt the big walls of the Sahayadri as it is dry and cool. Thus, in January of this year, a mountaineering friend Rohit Vartak and I, along with a photographer named Sharad Chandra, decided to rappel down the route (it is an easy hike to the top), analyze the risks, place some safety anchors and do this high-risk face with the fewest bivouacs.

So on the morning of January 17th we began rapelling down the face. We found some old ring bolts and a few rotten slings from the ’85 expedition. We realized that the route they had taken was no longer possible. The big vertical cracks were choked with debris from falling rocks which now formed overhanging chimneys. We placed 24 bolts using a power drill. We stopped for the night on the top of the last pitch. Sleep was difficult as the rock surface was uneven and it was very hot.

We started our climb the following morning. It was a long but important day as most of the pitches had to be completed before sunset.  The weather changed suddenly and the night was cold and very windy.  We spent most of the night worrying about rock fall. At abour 3 am a lemon sized rock hit me on the forehead, narrowly missing my left eye.

With our heads throbbing under the blazing sun we climbed the remaining pitches till we reached the summit of Kokankada at around 4:30 pm the following day. This was the second successful ascent of this face in 28 years. We felt the degree of difficulty of the pitches to be around 6c/7a with some pitches being 7b/7b+. We called this face the ‘K2 of the Sahyadri’.

This expedition would not have been possible without the help of our sponsor CAMP (Italy). We are also grateful to our climbing friends Sachin Gaikwad, Bhushan Pandharkar, Pranav Wamanacharya, Sunil Nanaware, Jitendra Gaikwad, Dr. Raju Lakhwani, Pranav Bhanose, Avdhut Salunke, Sidharth Adhav, Aashish Korhalkar for their help.

The author Samiran Kolhe is an experienced rock climber and a qualified mountain instructor who has led virgin routes on rock and valley crossings in India.