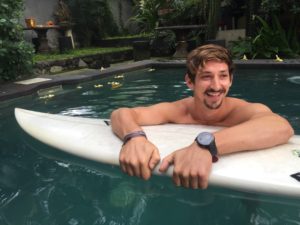 Note to the reader – you won’t find detailed specs here, just an honest review by a layman.

Let me start by saying that I’ve never really been a tech guy so breaking into the smart watch arena was a big, and somewhat hesitant step for me. Before the Forerunner, I was wearing a 4-year-old tough Solar G-Shock, the main feature of which was moon cycles and tides. No GPS, heart-rate monitor or smart phone compatibility – and it was great! I never changed the battery, always knew exactly how full the moon was, and even what time it was!

However, in today’s notification-crazed, communication-based, chaotic jumble of red bubbles, likes, and chimes, watches are now a whole different beast. The introduction of “smart watches” or “wearables” has turned these time-tested time-telling devices into something else entirely.

It seems that this new generation of watches have become extensions of our cell phones and due to their wearability, are now able to, like a small hungry infant pulling at your pant leg, demanding even more of our attention.

Let me be the first to admit that it’s convenient when you’re on a run and don’t want to miss an important call but also don’t want to take the time to remove your phone from whatever new pocket band sleeve thingamajig they’ve designed for it. Or obviously, if there’s an emergency and you have the ability to respond immediately.

On the whole though, I’m just not into it. If I want to check my phone, I will go through the arduous process of removing it from my pocket or arm band. For me it’s really about agency, if I don’t want to check my phone, if I don’t care who that last text message is from, or what call I’m currently missing, if I want to fully focus on my whatever I’m doing, well, I guess I think I should have that choice without my watch telling me otherwise. That rant, now complete, leads me to the fact that The Forerunner 235, the watch that I have been wearing for the last month, the one that has put my old G-Shock into storage for good, has the ability (when bluetooth connected) to show you who’s calling and what the first sentence of your most recent text message is. However, it also has the capability to turn off these notifications with a simple “Do Not Disturb” mode that, due to the watches simple-to-use (button-based) interface, is readily accessible.

I highly recommend taking advantage of this feature. Run without interruption.

In terms of battery life, the Forerunner is great, as long as you remember to turn off the bluetooth when you are not syncing or connected to your phone, this thing can last. I’ve been wearing it non-stop for about a week now and it’s just about time to charge it again. Additionally, the watch charges fairly quickly, so you won’t miss too much heart rate or step count data while it does. It’s a little weird, I’ve found myself becoming very attached to my data, so much so that I feel like I’m missing out when I can’t wear the watch.

Additionally, The Forerunner 235 has the ability to record sleep cycles and through the Garmin Express application, you can access these cycles for the week and see how you are sleeping, whether it is deep sleep and how much you move during the night. It also tells you how many hours you sleep per night which, for someone like myself with somewhat irregular sleeping pattern has proved very helpful.

The bread and butter for me, and the reason I am so hesitant to take this watch off of my wrist is the heart rate monitor. I don’t know what it is but ever since I put it on, I just really like knowing what my heart rate is. And it’s not only after exercise; I find myself checking my heart rate all the time, when I get in an elevator, when I use the bathroom, everywhere, all the time, I just want to know. What’s more, is that if you sync the watch to your phone, which, lets be honest, you really need to do if you’d like to use any of the other features, the Garmin app gives you detailed descriptions of your heart rate and the calories you burn. You just need to figure out the Garmin Express interface which can be confusing at times.

All that being said, I don’t know where my old watch is and honestly, I haven’t looked for it. When The Forerunner 235 is being what it is, a relatively accurate heart rate monitor, step counter, calorimeter, training buddy, and time-teller, it’s fantastic. It’s when it starts flirting with the wearable-tech line that it starts to lose me. When I’m in the lineup waiting for a wave, swimming laps, or running, the last thing I want to know is that my cell phone, wherever it may be, is ringing. For me, the times when I most appreciate the main features of The Forerunner 235 are when it’s “me time,” when I am consciously trying to disconnect from the omnipresent need to respond, react, or comment on well, anything; that’s when this watch is perfect.

The Garmin Forerunner 235 has great GPS tracking for running and walking coupled with a relatively accurate hear rate monitor minus the chest strap. It tracks steps, calories burned, sleep patterns, and has the ability to display texts and calls (if you like that). It’s also super waterproof, you can swim with it, surf with it, shower with it, really the only time you need to take it off is when it runs out of battery which happens only about once a week.

The Garmin Connect app  can be very confusing to use and the interface is not very user friendly. Some items (like weather widgets) that you download through the app only work when connected via bluetooth to your phone which drains battery from both devices. The heart rate monitor decreases in accuracy when activities go up in intensity such as in high interval training.