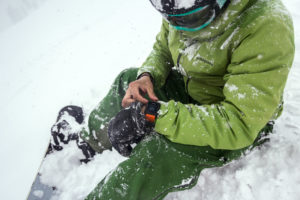 The TomTom Adventurer: A Watch That Saved My Life

Good gear can keep you alive in the mountains.

I always carry a probe, a shovel, and an avalanche transceiver, but what brought me down to safety was a watch I had never heard of. Adventurer is TomTom’s latest addition to the world of navigation.

I met a group of skiers and boarders who were queueing up at the chairlift despite considerable avalanche danger warnings by the Gulmarg Ski Patrol. The top of Mt. Apharwat—4,200 m (13,780 ft) above sea level—was drifting in and out of sight, hiding behind massive whiteout conditions. I checked my backpack for all the essential life-saving equipment (probe, shovel and a transceiver) including some food and water, and followed the skiers.

I don’t usually go against my better judgement. When Luke Smithwick, Snow Safety Officer at the Gulmarg Avalanche Advisory, explained the snowpack the day before and issued the warning, he also mentioned that it was safe (similar safety norms are practised in the US and EU ski resorts) to be in the confines of the resort.

Following his advice, my analysis, and all of my excitement to be here, I was on my way to Mary’s Shoulder; an exit of the chairlift just below the top of Mt. Apharwat. The group of skiers disappeared just before I took the exit and the visibility reduced to barely a meter. Adding to my rising heart rate, the chairlift stopped. Nobody was on their way up.

I have never been one to wear a watch. But there I was, standing atop a mountain, lost and scared, wearing the watch that literally saved my life. I boarded down through knee-deep powder but ended up in a bowl full of the previous day’s avalanche debris.

The Adventurer has a trail exploration setting that pointed me straight down to the start of the chairlift. Half my worries were alleviated just knowing which way I had to tumble down to safety. The automatic lift detection feature showed me how much gradient I was looking to snowboard over and the 3D distance that remained between me and my home (as the watch called it). It did give me a boost to see all this, but the danger was real and I didn’t yet realise the elevation I had to descend to get back.

Sitting flat on my butt end, hoping to not hear any resounding noise (that usually only means one thing in such bad weather – an avalanche), I was flicking through the screens of the watch. There is an incredible feature called ‘altitude delta’. I was lost at 3351 meters, and the delta showed that I had started at 3080 meters at Kongdoori, the base of the chairlift. Great, about 200 meters to go.

The Adventurer is a new entrant into a market dominated by other giants. It is simple, and frankly, I don’t feel terrible wearing a watch. There is no hassle of wearing a chest strap to get your heartbeat. Mine was translating from my pulse directly into the watch through an inbuilt sensor under the strap.

The watch is not as expensive as the other Garmin or Suunto counterparts and has packed in a new tool called the QuickGPSfix – something you bet a GPS giant like TomTom would have got right. The watch downloads the projected orbit of the satellites for the next 7 days, so it gives a more accurate reading on the GPS even if the signal is weak.

The TomTom Adventurer tracks all sports activities including skiing and snowboarding using QuickGPSfix. It has got a solid battery life that doesn’t die on you for about 18-20 days of monitoring sleep cycles, counting steps or calories. Unless you are using the GPS; then it is 9-10 hours. Hiking allows for a full day of GPS tracking because the watch sensors slow down to walking pace. The watch is water-resistant. My phone got buried with it in the snow, and only one of those survived. The data can be exported as a generic file that can be used across all sorts of apps that are meant for fitness and tracking. What I love about it is there is no more than 1 button. I keep my gloves on if it’s cold and move the tracker to get things done.

None except the app is still coming up to par with what other devices offer.