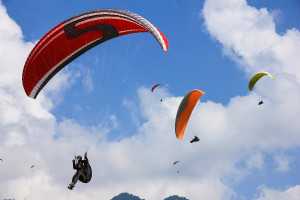 It was a year of highs for India's adventure sport industry and a damper for the country's environment.

We look back at the most significant events of 2015 for India.

As another year draws to a close, there is no denying that environment-related stories dominated every mainstream media all of 2015. From being declared one of the most polluted environments in world to hosting its first Paragliding World Cup, 2015 was packed with some serious highs and lows for the Indian outdoors community. Here’s a glimpse at the stories that defined the year.

Two earthquakes of magnitude 7.9 and 7.3 shook Nepal earlier this year, leading to a massive loss of life and property. Regions around Everest, Manaslu was badly affected, Langtang valley (a remote region 60km north of Kathmandu popular amongst trekkers) was destroyed and despite the relief and rehabilitation measures, the country is still trying to get back on its feet.

Five months after the earthquake struck the country, Nepal authorities have been mulling over restriction criteria for those attempting the world’s highest mountain, to prevent inexperienced enthusiasts from climbing the 8000er.

Everest remained unclimbed this year, despite repeated attempts by Japanese climber Nobukazu Kuriki to scale the mountain in October.

India’s fastest Seven Summits climber, and one of the underrated mountaineers of the country was found dead in the Andes more than ten days after he went missing in the mountains. He had gone on a solo attempt to climb the Cerro Tres Cruces Sur (6749m), the second highest mountain of Chile that lies on the border of Chile and Argentina. It is part of the Tres Cruces (three crosses) massif of the Andes. His body was found at around 5900m inside the wind-ripped remains of his sleeping bag and tent.

Babu, 40, held a world-record for being the fastest Indian to complete the seven summits in 172 days (Jan 19 – July 10, 2006). He climbed several peaks in the Andes mountains, including the famous Aconcagua (6962m) thrice. An alumnus of Indian Institute of Management, Calcutta, he gave a number of lectures on leadership and management at companies like GE and Intel and at management schools across the globe.

Rafting beach camps not allowed on the Ganges

A courtroom saga that carried on for six months finally saw a verdict this December.

Nearly six months after the first petition against rafting camps on the Ganges was filed, the National Green Tribunal (NGT), India’s top environmental court declared its verdict on the ongoing issue on Thursday, 10th December.

The NGT denied permission for camping activity along the 36 km Kaudiyala to Rishikesh stretch till strict regulation is in place.

River rafting camps on the Ganges in Uttarakhand in north India were under fire after a petition filed by a non-profit alleged they cause ecological damage before the NGT. The adventure tour operators appealed the court to discern between the good and bad operators, check the ones with illegal licenses, and not put a blanket ban on all.

However, the court will not allow any camp to operate on the stretch till strict regulatory measures are in place. Meanwhile, rafting is allowed to continue.

India played host to its first Paragliding World Cup in Bir-Billing in Himachal Pradesh from 23rd to 31st October this year. The country witnessed 130 paragliders from 35 countries compete.

Bangalore-based Chunchunguppe Shivshankar Santosh became the first Indian to compete and complete the 2015 Dakar Rally – considered amongst the toughest endurance races, and notorious for its fatal accidents.

The Paris Climate deal was one of the most important events of 2015.

Climate change is real, and has been wholly recognised as one of the biggest concerns of the planet by all of 196 countries at the recently concluded Conference of Parties in Paris. With all its flaws, the Paris Agreement is an important step forward to address the need to lower carbon emissions.

The biggest question the outdoors community asks is whether this agreement will actually save the planet, given that India alone is the third largest consumer of fossil fuels and has some of the world’s most polluting cities.

Ladakh’s Chadar trek was banned earlier this year as a landslide blocking one of the upper Zanskar tributary had created dangerous conditions for trekkers planning the popular ice trek, prompting local authorities in north India’s high altitude plateau region to impose a ban until further notice.

The year also witnessed the disastrous Chennai floods in December, owing to poor urban planning and several surfing schools stepped forward to rescue those in need.

The Outdoor Journal reported earlier this year about an award-winning couple who bought tracts of abandoned agricultural land in the Western Ghats and allowed them to flourish as the bio-diverse rainforests they actually are.

On this note, one hopes that people become more aware of their environment, and push to use green energy. There is no planet B.