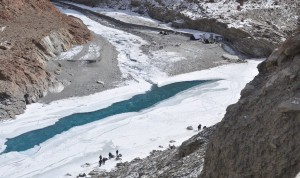 According to a notice posted on the LAHDC website on Saturday, “the District Administration has imposed a blanket ban on the trek with immediate effect due to sudden landslide in one of the tributaries of River Zanskar, thereby leading to a danger of flash floods.”

The notice also stated that “in case the landslide is cleared the administration will reconsider the ban after checking from the agencies (sic).”

When contacted by The Outdoor Journal, Skalzang Wangyal Gara, Executive Councilor of Tourism and Zanskar Affairs of the LAHDC said, “It was believed that a tributary of the Lungnak river (a major tributary of the Zanskar river) was blocked between the regions of Marshun and Shaday Sumdo (lying within a narrow gorge in Kargil district). The area is inaccessible and not even a helicopter can land there. We noticed it when our two hydel projects – Nimoo Bazga and Chutak between Zanskar and Kargil showed a considerable reduced  flow of water.”

“An aerial recce of the region revealed that a whole side of mountain soil had landed on the Phuktal river from Shaday Sumdo at a distance of 5.5km from Marshun. The mound of earth was about 200 feet high and covers 97% of the river.

“The accumulated water has frozen and has formed a temporary artificial lake about 5km long upstream. We fear it might burst suddenly, causing havoc to villagers in the low-lying areas.” he explained.

In a telephone conversation, Simrandeep Singh, district magistrate of Leh and Chief Executive Officer of LAHDC told The Outdoor Journal, “Owing to the threat caused by the blockage, we have put a blanket ban on all movement on the Chadar, even if it doesn’t come under the same route, as a precautionary measure.”

“We have stationed police personnel at Chilling and Nerak (the start and mid-point of the Chadar trek route in Leh) and have taken back all the trekkers found on the stretch at the time of the ban back to Leh,” he said.

“We are still assessing the situation, and I believe it will take seven to ten days before a decision is reached,” he added.

Ladakh is the highest plateau region of Kashmir in north India. Also known as the ‘land of high passes’, it includes the Karakoram and Himalayan ranges and the upper Indus valley. The Zanskar river is a north-flowing tributary of the Indus, that connects Chilling in Ladakh to Padum (a town in the Zanskar region in eastern Kashmir). In winters, the roads to Zanskar close down due to heavy snowfall. The river freezes and walking along it becomes the only overland route to Padum. The frozen river is known as Chadar (a white sheet) and has become a popular trekking route for adventurers.

When asked about what other measures were being taken, MS Sheikh, district magistrate of Kargil told The Outdoor Journal, “We have sent a technical support team (of engineers) for a second aerial survey of the area. We are not sure if it is a good idea to blast a portion of the mound or wait for the ice to melt or if we can find a way to create an opening for the river to flow.”

“But we have instructed regional authorities to advise all villagers in nearby areas to shift to safer places and are preparing for rehabilitation measures in case disaster strikes. There is no immediate danger yet,” he added.

The Chadar trek is one of the most sought-after winter treks of the subcontinent, and a popular commercial product for tour operators. The unforeseen ban has the operators worried. Stanzin Chotchan, founder of Zanskar Himalayan Exploration (a Ladakh-based tour operator) is dismayed. “This is not good. There were so many people looking forward to the trek. Moreover, porters and guides had walked all the way from Zanskar town (on the other end of the river) to Leh to work here. How are they going to earn a livelihood now? They are stuck here, can’t even go back!” he said over a telephonic interview.

Manish Adlakha, co-founder of WildBoots, a startup trekking company is hopeful that the landslide will clear in the coming week. “My first group is due to leave for the trek on 1st February. They need to create an opening for the river to flow, and once that happens, I hope the Chadar will resume. But the safety of villagers & trekkers is paramount. We have planned alternate trek routes in case Chadar does not happen,” he said.

*The word Chadar means a white sheet in Hindi. In winter, the Zanskar river in the upper Indus valley in Ladakh freezes, resembling a white sheet, and walking along it becomes the only way to reach to the villages and towns on the other end.