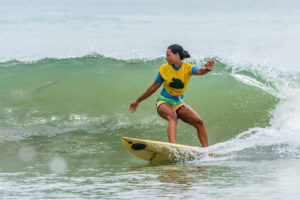 The annual Covelong Point Surf, Music & Yoga Festival wrapped up another successful installment this past weekend, as some of India’s brightest young talents and veteran wave riders competed for gold.

Since its inception five years ago, the Festival has been a highlight for the Indian surfing community and outdoor industry each summer.

Former South African cricketer and The Outdoor Journal Brand Ambassador Jonty Rhodes attended the festival and was blown away by the level of competition. “The surfing standard has risen incredibly,” Rhodes reported. First-time medalists and defending champions alike graced the podium at the end of the day. Gus Hugno won the Open Category, while Ajeesh ali won his second consecutive gold in the Under-16 Category. On the women’s side, Suhasini Damian won the Local’s competition, and Brigid Hayes won the International competition.

But it was the youth categories that really impressed Jonty Rhodes. “12 [year-olds] now have their own category and the finals took place in decent size swell. I was standing on the beach right next to where their ‘coaches’ were having to help ‘push’ them through the channel between the rocks to enable [them] to just paddle out through the waves,” Rhodes said.

Waves were [occasionally] double overhead for these little guys―I haven’t seen too many ‘oversized’ village youngsters, and these little athletes were probably as light as their surfboards! Was my highlight of the event.”

In a press release about the event, Rammohan Paranjape, Vice President of the Surfing Federation of India, offered congratulations to the entire field and echoed Rhodes’ sentiment about rising standards and potential in Indian surfing: “Not only has the surfing community in India but locals as well as the government has seen the potential of this event grow every year.”

Itching to catch some waves yourself? Here’s your chance at The Outdoor Voyage! Here’s the complete list of winners from the Covelong Point Surf, Music and Yoga Festival 2017: