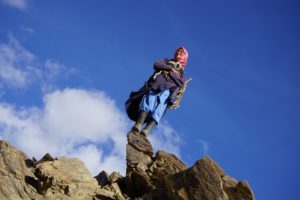 The event marks yet another step forward in the country’s nascent but growing adventure industry.

“Nature does not differentiate between gender. When you are high up in the mountains, it does not matter if you are a man or a woman. Your level of fitness is the only thing that counts,” adventurer Vineeta Muni said to a cheering audience in New Delhi last Saturday.

The Indian Mountaineering Foundation (IMF) hosted the first edition of a unique mountain film festival for Indian filmmakers, on February 11 and 12 at its sylvan headquarters in New Delhi. The festival showcased 33 character-driven films on adventure and wilderness in India. Curry Pow by The Vibe was a visual treat on skiing and snowboarding the powder slopes of Gulmarg, Bawli Booch by 4play.in was a music video of mountain biking both trails and lanes in a small village near Manali in Himachal Pradesh. The video played to a well-known Bollywood soundtrack (playing equally fast and loose with legal rights as the biker did with terrain), and had mass appeal thanks to clever storytelling. There were films on BASE jumping, mountaineering, climbing, kayaking, ultra-running and exploration of remote valleys of the Himalaya, such as Sandeep Bisht’s Chasing Nanda Devi, a short, low budget film about his journey towards eastern Nanda Devi.

There were films on mountain culture, climate change and strong individuals, such as Roads Unseen, a short story by Amrit Vatsa depicting the unwavering spirit of a blind mountain biker. Eastern Himalaya – Ancient Risks and Future Threats by Felis Creations talked about the rapid pace of global warming in the eastern Himalaya through conversations with people living in the region. More than 600 people attended the two-day event. Maninder Kohli, Founder and Director of the festival, called it “a roaring success.”

Bridging the Gap Between Adventurers and their Audience

“We were pretty sceptical when they told us that a complete novice to mountaineering will be accompanying us to attempt a first ascent of a 7000er,” Vineeta Muni told The Outdoor Journal in an interview.

Vineeta and Divyesh Muni are an old-school adventure couple, who have been going on mountaineering expeditions for almost 35 years. Vineeta, also an artist, has walked the entire length of the Indian Himalaya, from Arunachal Pradesh to Jammu & Kashmir in a continuous stretch of 198 days. Divyesh, a chartered accountant, has led several Himalayan expeditions.

101 India, an Indian youth portal that creates visual stories on off-beat subjects was keen to partner with the duo on their next expedition, and weave a story around their journey. To create an interesting narrative, they decided to rope in Rosh, a newbie to mountaineering. Divyesh, Vineeta and their team were hesitant at first, because they were planning on a first ascent of a 7000er in a remote valley in Ladakh. However, seeing he was fit enough, they decided to rope him in. The whole journey resulted in an 8-episode YoutTube series called My Epic Adventure – Journey to the Himalayas, told from the point-of-view of Rosh, and according to the series producer, it received a terrific response. A 25-minute version film on the series called 200 meters was shown at the festival.

“We are catering to a generation that views everything on mobile, many-a-time without sound,” Sajeed, director of the series, explained. “They aren’t really that patient. Strong, catchy storytelling is very important.”

Abhijeet Singh is a photographer, and a self-taught ice climber. A chance meeting with Anchit Thukral, a New Delhi based filmmaker led the two to decide to work on a documentary, where Anchit’s visual team Morpheus Productions would document Abhijeet and his climbing partner Pranav Rawat’s attempt to climb two frozen waterfalls in Spiti.

For Anchit and his team, this was a venture into a completely new territory. “We did not know anything about adventure films, no idea what we were stepping into.” Anchit told The Outdoor Journal in an interview. “But we wanted to try it out, and see if this was something that we could do.”

His team of eight embarked on a journey with Abhijeet and Pranav to Spiti, where in -20 degrees celsius they recorded the climbs and journey on camera. “It was crazy,” Ankur said. “We have never felt so exposed to the elements before. There were so many mishaps in between. We were not even sure if we could do it.”

What kept them going?

“I’m not really sure,” Anchit says. “All I knew was, watching these guys attempt a frozen wall, and sticking to it for six-seven hours till it was climbed made me respect them. I felt a commitment to the task, and was just compelled to go ahead with it.”

Their film, The Fall, follows two climbers attempting first ascents of frozen waterfalls in Spiti. The fact that it is made by non-adventure filmmakers is evident in the film, but what makes it a worthy watch is the strength of the characters, catchy music and visual effects, giving it a wider appeal. For a country like India, where adventure sports is still a niche but a growing market, it is a good way to spark interest in the space. The film ended up winning the Grand prize of INR 50,000 at the film festival.

“We are bridging a gap here,” said Neil D’Souza, a Bangalore based filmmaker who’s short teaser of last year’s Malabar River Festival, called Malabar Kayaking Festival was a big hit in the audience.

“There are people doing these amazing things, and we as filmmakers are venturing into this territory, and trying to create stories that would appeal to an audience who may not be that well aware about the space.”

There were films created by veteran filmmakers—serious efforts to sensitise audience about mountain cultures. Stanzin Dorjai Gya, a Ladakhi filmmaker showed Shepherdess of the Glacier, a quiet observation into the life of Tsering, one of the last few shepherdesses in the remote Gyameru Valley, in the northern mountains of Ladakh. The camera follows her around as she looks after her flock of 300 sheep, talks to them, to herself, listens to her constant companion—the radio, and tackles the challenges of daily existence. “It shows the intimate relationship my sister shares with her animals, in the backdrop of a barren landscape, and the loneliness and struggles of existence,” Stanzin told The Outdoor Journal in an interview. The protagonist of the film is his own sister. “But she is ultimately a happy person, her soul pure and her heart full of joy.”

What’s next for the IMF Mountain Film Festival? “We are going to do a tour, where we will take it to several cities, mountaineering schools, and clubs around the country. And we are hoping to see it become a bigger and better affair next year! I’m thankful to our sponsors J&K Tourism, SAHA and Woodland for making this happen,” said Maninder Kohli.

India is witnessing a slow and steady growth of a movement, of a community of storytellers, adventurers and athletes relentlessly exploring the vast wilderness of their own backyard, the potential for an alternate lifestyle, where joy is found in living close to nature.