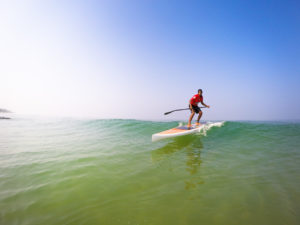 SUPers Tanvi Jagadish and Sekar Patchai will represent India at the 2016 Fiji ISA World SUP and Paddleboard Championship from 12th to 20th November.

For the first time, India will witness a representation on an international platform for StandUp Paddleboarding (SUP).

Tanvi Jagadish (16) of Mantra Surf Club based in Mulki, Karnataka and Sekar Patchai (25) of Covelong Point Surf School based in Chennai, Karnataka are set to participate at the 2016 ISA World SUP and Paddleboard Championship to be held in Fiji from 12th to 20th November.

The two were selected by the Surfing Federation of India (SFI), a national governing body certified by International Surfing Association (ISA). Rammohan Paranjape, vice president of SFI and the team’s official representative told The Outdoor Journal in a telephone conversation, “Both Tanvi and Sekar have been consistent winners in national championships for the last three years. When the world championship was announced, the two were an obvious choice for us.”

The two will be participating in Distance and Technical races in the men and women categories.

For Ms. Jagadish, this is her first time participating in an international event. “I am super duper excited for representing my country on an international platform! This is my first time ever,” she told The Outdoor Journal excitedly. When asked about her training routine, she said, “For the past many months, I have been staying at Mantra Surf Club so that I can completely focus on training.  I wake up at the crack of dawn, do yoga and meditation, then SUP training from 7 to 10am, eat, relax for a bit, yoga again in the afternoon and a three hour of SUP training session in the evening. I make sure I get proper sleep too.”

Mr. Patchai, from Covelong and youngest of seven siblings, was a fisherman who fell in love with surfing in 2011. He soon joined Covelong Point Surf school and began competing in national competitions, and winning them. This is his first international participation in SUP.

Drawing on roots that are thousands of years old SUP is an aquatic sport where paddleboarders stand up on a hard board and use a paddle to propel themselves through the water. Over the years, the sport has gained popularity globally and this year will be the fifth edition of the ISA World Championship.

This is also the first time that Fiji will be hosting the world championship, highlighting the global growth and expansion of surfing and racing. The competitions will take place in the pristine waters of Cloudbreak, Denaru Clouds and Musket Cove in Fiji. Check out the promo video here.