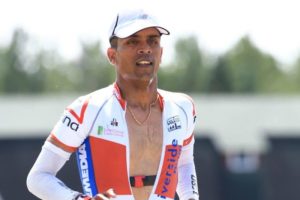 He is the first Indian ever to race at the historical Ironman playground.

Subramani Venkatesh, fondly known as Subbu, became the first Indian to qualify for the 2016 Ironman World Championship when he finished second in his age group at Ironman Lake Placid on 24th July, 2016. Ironman is a triathlon event that includes 3.8km swim, 180km bike and 42.2km run.  He is also the only Indian to have finished two Ironman events under 10 hours, and is known as India’s fastest Ironman.

Ironman World Championship is an annual event and a place where top triathletes rub shoulders. It is considered to be the world’s most grueling one-day endurance sport event. An Ironman race was first organized in 1978 in Hawaii and since then, it has become the mecca for triathletes. It is a dream for every Ironman triathlete to race at Ironman World Championship in Kona, Hawaii. But getting an entry is a challenging task. Only the top finishers at other Ironman events get entry to race at Kona or through lottery.