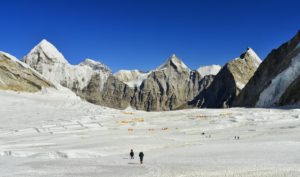 International Mountain Day: Are We on the Right Track?

How far have we reached in our efforts to protect the mountains and their culture?.

It has its roots in 1992, during the adoption of Chapter 13 of Agenda 21 “Managing Fragile Ecosystems: Sustainable Mountain Development” at the United Nations Conference on Environment and Development (UNDEP). The increasing attention to the importance of mountains led the UN General Assembly to declare 2002 the UN International Year of Mountains. The UN General Assembly then designated 11 December, as “International Mountain Day”. FAO is the coordinating agency for this celebration (IMD) and is mandated to lead observance of it at a global level. The Water and Mountains Team of the Forestry Department is responsible for coordinating this international process.

Mountains are home to 13% of the world population, and attract 16% of global tourism.

The Outdoor Journal spoke to mountaineers and outfits working for the rights of the indigenous mountain people and mountaineering bodies to understand how far we have reached in the protection of mountains around the world and the challenges involved.

Mountaineer and guide Adrian Ballinger, who has been conducting mountaineering expeditions around the world for nearly 15 years explained to The Outdoor Journal, “Overall, high altitude mountains across the world are becoming more difficult. Perhaps due to climate change, traditionally snowy mountains are becoming ice and mixed, and ice and mixed climbs are becoming more rock. These changes seem to increase risks due to rockfall, increased instability in seracs and glaciers, and more difficult climbing. Especially in the Andes, climbs that used to be considered moderate are now extreme, and many extreme lines have become unclimbable. I have seen this change most clearly in the Cordillera Blanca in Peru, where I have spent 13 seasons.” Adrian is a certified IFMGA/AMGA mountain guide, through the American Mountain Guides Association.

The Situation in Nepal

The Himalayan kingdom that was shattered by a disastrous earthquake and is under an unstable government directs most of its tourism (that accounts for a large part of the country’s economy) to mountain activities. Everest is still a big lure, and a lucrative opportunity for tour operators. Mountaineer and writer Alan Alarnette, whose blog and news on the Himalaya and Everest are widely followed, told The Outdoor Journal in an email that Everest now sees on a regular basis, 500 people summit, many with limited mountaineering experience.

“The price to climb Everest has been dramatically reduced primarily due to the Sherpa owned guide companies coming into the market and competing on price. Many western companies will charge over $50,000 while a Sherpa owned guide service will ask half of that,” he said.

Nepal suffers from a struggling government, that has been trying to regulate climbers attempting Everest in the past. However, Himalayan Database’s Billi Bierling told The Outdoor Journal, “I think there are too many people involved in making money- first and foremost the Nepal government, as they get 11,000 USD for each person attempting Everest. Even if such a regulation were to be introduced, I think there would always be ways of getting around it, so I don’t think this can be regulated. I think it is important to educate people about the resources the mountains provide us with and make them aware that by putting too much pressure on them we will end up in losing a very important asset to our earth.”

As far as waste management is concerned, Mr. Arnette said, “There has been little substantial improvement by the governments in terms of regulations aimed to keep the mountain clean. The improvements in keeping the mountain clean have been led by the many commercial guides, especially on the Nepal side of Everest. Again trekking, based out of Kathmandu, has led the effort on the South side with their ‘Eco Everest’ climbs and have removed tonnes of trash. Also, the Indian Army has made great contributions as shown with their clean-up of Everest Base Camp after the 2015 earthquake and subsequent avalanche.”

Mr. Ballinger said, “Our most popular mountains must be regulated to promote Leave No Trace ethics, and also to ensure that commercial use of the mountains meet standards of safety. This issue is becoming increasingly severe in Nepal, where low-cost operators are operating in an unregulated environment and reversing the trend of past decades that commercial use (mountain guiding) increases safety and cleanliness on mountains.”

He added that Nepal needs to be encouraged to improve their regulations and enforcement, and encourage clients to demand Leave No Trace and ethical standards for workers, even though this means increased prices.

According to Mr. Arnette, “The Argentinian government is doing a good job with Aconcagua as is the US government with Denali.”

Mr. Ballinger explained, “Mountains like Kilimanjaro and Aconcagua – which used to have horrible reputations for trash, human waste, and the unethical treatment of porters – are now excellent examples of well-managed natural resources. Their governments recognized increasing popularity, and the importance of keeping these places pristine, and they invested in regulation and management. This has also been true in the Alps and USA (Denali is an excellent example of a popular climb that is well managed).”

Utah Valley University (UVU), the state university of Utah, USA, has an outfit called Utah International Mountain Forum (UIMF) that has its members (students and staff of UVU) serve the local communities of Utah’s national parks, where overcrowding and general pollution had become a big problem, owing to its popularity.

“Students are involved in various initiatives concerning mountain communities locally but also on a global level. They have advocated for the inclusion of the mountain targets among the sustainable development goals (SDGs) and contributed to a climate change petition signing under the Mountain Partnership, a UN alliance dedicated to improving the lives of mountain peoples and protecting mountain environments around the world,” stated the representatives of UIMF.

We have a long way to go to protect our mountains. We can begin by educating ourselves and others of best practices – visit the mountains in small groups, leave no trace, and support local communities.

Feature image © Kuntal Joisher during his May 2016 Everest Expedition