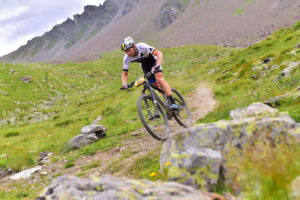 Karl Platt, a German marathon mountain biker, is a 5-time winner at Cape Epic, one of the toughest mountain biking races in the world.

Find out more about his training, nutrition and future plans.

Karl Platt, 39, is a German marathon mountain biker who has been a consistent name at the Cape Epic since its inception in 2004. He lives in Osthofen, Germany (close to Frankfurt) and is a professional mountain biker for 20 years now. He got into the sport when he bought himself a heavy steel frame mountain bike in 1991 with no suspension. His favourite races are Cape Epic and BIKE Transalp and he partnered with Stefan Sahm with whom he has won three Cape Epic events in 2007, 2009 and 2010. Stefan will be his Cape Epic 2017 riding partner. He won the German downhill junior championship in 1996 and later transformed to cross-country races in 2001.

The Outdoor Journal got in touch with the mountain biker recently.

TOJ: What is your biggest strength in a mountain biking race?

Karl: My strong point is that I am good on the bike in technical sections and my interval training gives me a quick head start.

TOJ: What is your most important workout that helps you become stronger on the bike?

Karl: My perspectives in terms of training have changed in the past 25 years. I see a lot of riders just logging in miles and focus less on interval training. Enduro training is good but intervals can’t be put on the back seat.

TOJ: How many hours in a week do you spend on the saddle?

Karl: I do about 4-6 hours of endurance bike ride a day and throw in intervals once in a while during a week of training.

TOJ: How do you keep injuries at bay and have you suffered any major injury in the past?

Karl: I dislocated my shoulder due to a fall at the 2009 Cape Epic and had to stop racing. I had to go under surgery. I take good care of my body now and training various body parts that often feel neglected.

TOJ: What is that one thing you want to avoid in your diet plans but can’t?

Karl: I’m not so specific about a proper diet plan but I eat healthy that makes me stronger on the bike and I put on a healthy weight. I do like to have a beer after the race or a glass of wine in the night.

TOJ: How do you choose and plan your races calendar?

Karl: I don’t like cold races. I like South African races because of the terrain, warm and nice weather.

TOJ: Which is that one race you never want to miss from your calendar and why?

Karl: Cape Epic and BIKE Transalp are my favorite races because of the perfect weather and the ambience of the race.

Karl: I have BIKE Transalp, World Championship at the end of June, all the European Classics and a couple of UCI races.

TOJ: What are your plans after retirement?

Karl: I want to do something in mountain biking, perhaps mentoring young riders.

Karl currently rides Bulls bikes and has been with them since 2007 (first year of the team). Depending on the characteristics of the race, Karl chooses between two different bikes. For races on rough terrain like the Cape Epic, its the BULLS Wild Edge Team Di2 and for races with long steep climbs like Transalp or the Grand Raid, it´s the BULLS Black Adder Team Di2.

Karl has won an uncountable number of stage races in his career (Trans Rockies, La Routa de los Conquistadores, Trans Schwarzwald, Trans Zollernalb, Trans Germany, Langkawi International MTB Challenge, Tankwa Trek, etc.), even more of the biggest one day marathon races in Germany and all over Europe. He is a long time member of the German National Team and also used to represent Germany at many Continental and World Championships in Cross-Country and Marathon races.

With the two established professionals Karl Platt and Stefan Sahm, the story of success of Team Bulls started in 2007. The duo quickly drew attention with their grandiose successes in long-distance races, immediately winning the legendary Cape Epic, BIKE Transalp and Trans Germany in their very first year. Over the course of the years, the duo has grown into a large and powerful team with athletes from different nations, who cover almost every area of Cross Country and Marathon. In 2016, Karl Platt and his partner Urs Huber together achieved their probably biggest success for Team BULLS with winning the ABSA Cape Epic. It was the 5th victory for Karl in this event; only Swiss Christoph Sauser has also won 5 times. In 2017, they both battle for win number six.