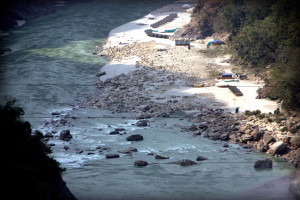 Sources claim a 90% rise in the number of rafting camps on the Ganges in less than a decade, blaming 'haphazard' and 'unregulated licensing' behind the rise.

We examine the numbers, and what is actually going on.

River rafting camps on the Ganges have come under fire after a non-profit petitioned the National Green Tribunal (NGT)*, India’s top environmental court, saying they cause ecological damage.

Over the years, the 36km stretch from Kaudiyala to Rishikesh has seen exponential growth in whitewater rafting, with many riverside camps set up on a small stretch of the Ganges.

Rafting season lasts between September and June every year.

As explained in the previous report, one of the allegations of the non-profit is that ‘the haphazard and unregulated licensing of river rafting camps along the Ganges from Shivpuri to Rishikesh by state agencies has led to immense pressure on the river, that it is on ‘first-come-first serve basis and without any consideration for the carrying capacity of the river.’

Licenses for rafting camps on the Ganges: How it began

As a commercial enterprise, whitewater rafting began on the Ganges in the 1980s. Avinash Kohli, an adventure tour operator, is often regarded as the first person to bring about the adventure activity as a tourism enterprise in India.

The first riverside rafting camp was set up by Yousuf Zaheer of Himalayan River Runners in 1988 in Shivpuri. He worked with Avinash Kohli before starting his own company. “The whitewater rafting/camping model is geared towards wilderness areas and practiced by the outdoors man. That was the concept with which it began,” Yousuf told The Outdoor Journal over telephone, as reported in the first part of the series.

A beach camp is on a sand bank of the river, consisting of temporary canvas one-two person tents, a kitchen area and dry pit toilets. The camps are temporary and are supposed to be dismantled at the end of the rafting season.

“At the time, the concept of utilizing a sandy beach as a seasonal beach camp to enhance the rafting experience was unprecedented in India, the area was used for sand mining,” Yousuf explains
Over time, as whitewater rafting grew in popularity, the then state government of Uttar Pradesh formalised rafting and camping by the Ganges as adventure activities. It began issuing licenses for rafting in 1990, and for rafting camps in 1994, subject to strict conditions.

In 1994, there were four rafting camps on the stretch and the license was issued on a seasonal basis.

The division of land

“In 1993, the then government of Uttar Pradesh passed a Government Order (GO) for setting up campsites in specific areas subject to conditions. We are following that rule currently. Licenses are reviewed and renewed every season. But you must remember that different lands come under different jurisdictions,” SP Subuddhi, Conservator of Forests, Bhagirathi Circle told the The Outdoor Journal.

“The Forest department is in charge of the forest area, the revenue land comes under District Magistrates of Pauri and Garhwal, and private land is, well, privately owned and controlled,” he continued.

“So you obtain a license from the authority controlling that piece of land.”

“The forest dept has a fixed rental, slab allocation. Slab A would be a big beach camp, covering over 10,000 sq mtr and the smaller ones would come under B and C. So depending on the slab, we would charge Rs.15sq/m for A, and less for B and C,” Subuddhi explained.

65% of Uttarakhand comes under forest cover.

A rafting license is separate from a rafting camp license.

Once you get a clearance for a rafting license from Uttarakhand’s Tourism Development Board (UTDB), you become eligible to apply for a camp license, which is issued by the Forest department or the Land Revenue department, depending in whose administrative jurisdiction the campsite falls.

The UTDB website created new guidelines for obtaining licenses for rafting in 2013. However, there is no mention of rafting camp licenses on the website.

“We have proposed a new set of guidelines, which are being reviewed by Uttarakhand’s government. If they pass we will most probably either do an auctioning of land among rafting operators, or conduct a completely open auctioning,” Subuddhi told The Outdoor Journal over telephone.

According to a 2011 report titled ‘Socio-environ impact of river rafting industry on Ganges in Uttarakhand, India’ published in the International Journal for Environmental Science, the number of rafting camps between Kaudiyala and Tapovan Ecotourism Zone was 74 in 2009-2010, a 90% increase from four camps in 1994. The report also stated that the area devoted to camp sites had increased from 2000 sq m (1994-95) to 1,80,000 sq m (2009-10).

Today, the number of registered camps on the 36 km stretch are 87, according to Subuddhi. But the land, as filed in the petition has been ‘encroached upon’ by unregistered camps.

The Indian Association of Professional Rafting Outfitters (IAPRO) launched an online petition a couple of weeks ago, where they mention that “Earlier, rafting permissions were given to those entrepreneurs who had personal skills of guiding, know – how and experience in outdoor recreation, and who possessed rafts. Later rafting permits were handed out to anyone who had the wherewithal to set up camp and buy the equipment and hire the guides, to a stage where ad-hoc licenses began being issued by area gram sabhas, Forest Departments and even the local District Magistrate. We recognize this as the first debilitating step of moving from Eco-Tourism towards Mass Tourism.”

Explaining the growth of the rafting industry, Yousuf told The Outdoor Journal, “The industry has grown over the years on the stretch, the number of camps have increased. The job of the forest and other government departments is to monitor who is doing their job and who isn’t, and if it’s not doing that, then there’s bound to be a problem. Himalayan River Runners and several other camps have stuck to the low impact simplicity of the camping experience without introduction of any modern conveniences which belong in cities or hotels. This was the ethos, but now when all around you see unregulated growth without any checks , then you reach a point of diminishing return, and I think that point has been reached.”

In the next part of the series, we examine the alleged ecological damage to the region.