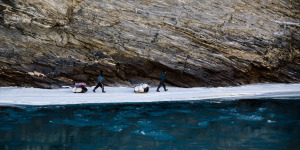 The district magistrate of north India's high plateau region says they have not authorized a decision on limiting the carrying capacity for the Chadar* trek on the frozen Zanskar river.

Just days after the All Ladakh Tour Operators Association (ALTOA) issued a circular stating a cap on the number of trekkers for the famed Chadar trek, the Ladakh Autonomous Hill Development Council (LAHDC) denied any role over the matter.

When contacted by The Outdoor Journal, Simrandeep Singh, District Magistrate and Chief Executive Officer of Ladakh Autonomous Hill Development Council (LAHDC) said, “This circular has been issued in my absence and without my knowledge. The LAHDC has not approved it.” The LAHDC is the main authority in the higher plateau region of Jammu and Kashmir to issue such an order.

In a decision triggered by a growing concern amongst local tour operators over environmental damage and business loss, a circular was sent by All Ladakh Tour Operators Association (ALTOA) to its members last week, stating that the LAHDC has fixed a limit on the number of people doing the famous Chadar trek, along with putting a permit fee of INR 2500 per trekker. The circular cited environmental damage by mass tourism as primary reason for the decision, to be put in effect from January 2015.

Ladakh is the highest plateau region of Kashmir in north India. Also known as the ‘land of high passes’, it includes the Karakoram and Himalayan ranges and the upper Indus valley. Zanskar river is a north-flowing tributary of the Indus, that connects Chilling (a town in Ladakh) to Padum (a town in Zanskar in eastern Kashmir). In winters, the roads to Zanskar close down due to heavy snowfall. The river freezes and walking along it becomes the only overland route to Padum. The frozen river is known as Chadar (a white sheet) and is a popular trekking area amongst adventure seekers.

However, when contacted, the local authority’s district magistrate said over phone that he was not aware of such a circular being issued.

According to the district magistrate, “A proposal submitted by Ladakh Tour Operators (ALTOA) is under consideration, within the larger framework of the Indian Constitution/Statutes pertaining to such subjects.”

Deleks Namgyal, General Secretary, ALTOA said Monday evening, “The entire Ladakhi community – wildlife, tourism, NGOs, taxi unions and hotel associations have supported this cause. We are not happy with the way commercial enterprises like Indiahikes have been functioning in Ladakh. A proposal was sent to the LAHDC. The DC has been away, owing to elections in Jammu and Kashmir. And this issue has been concerning us for a while now. We decided that something must be done about it since the Chadar trek is a few months away. So we issued a circular to our members informing them about the cap on the carrying capacity, and the permit fee.”

Indiahikes, a trekking company based in Bangalore, has cancelled its Chadar treks for January 2015, after almost 300 people registered for the Chadar trek between 9 January and 22 February. Arjun Majumdar, founder of the company responded to the TOJ correspondent’s email sent last week, “Restricting the number of trekkers to Chadar will not reduce the environmental issues that surround it. What is required on an urgent basis is infrastructure development along the trail. It does not take much to build toilets at fixed spots.”

When asked why they called off the trek, he said that Indiahikes has always been looked upon as  a “representative of something heinous that has been committed to Ladakh, when this is far from truth” because their “green policies are fairly strict and robust.” According to him, ALTOA’s move is a “clever” and “coveted” way of preventing free trade.

“ALTOA threatened all local agents, operators of taxis, buses, porters, guides and hotels not to work with Indiahikes….With this situation in hand, where even getting a hotel stay and reaching the start of the trek was being threatened, we decided to call off the Chadar trek,” he said in the email.

Mandip Singh Soin, founding member of Ecotourism Society of India and managing director of the Indian travel company Ibex Expeditions scoffed at the idea of building toilets in fixed spots.

“Building toilets on an area as fragile as the Chadar is an absolutely nutty idea. It is the last thing you want in a space that you want to protect. We need a leave-no-trace policy here”, Mr. Soin told The Outdoor Journal in a telephone conversation.

“When we organised the first exploratory expedition to Chadar in 1994, we saw a huge potential of introducing winter tourism in the area with the possibility of helping the local economy with employment. It was a win-win situation for everyone. Today, I am sad to hear that 400 people walk on the frozen river in a day. It is almost like a railway station with garbage strewn around everywhere. The space is not meant to carry such a huge number of people at a time. I advocate the capping on the number of people, and charging a nominal fee for the permit, which can be used later for environment redressal or a clean-up at the end of the group’s trek,” he added.

“Capping the number of people and groups is a good move,” said Akshay Kumar, President, ATOAI (Adventure Tour Operators Association of India). “The area is ecologically fragile and we need to take as many steps as possible to protect it. Fixing a carrying capacity on Chadar is one such step,” he said in a telephonic interview.
The reasons for the move, as stated in the circular were:
– Chadar has limited carrying capacity and mass tourist treks cannot be operated as it is a threat to flora, fauna, and ecology at large.

– Chadar is a premium product and should not be sold cheap, as it is marketed by some Indian companies.

“A couple of years ago, commercial enterprises like India Hikes had started bringing groups of 30 people at a time for the trek. Since they got tourists in bulk numbers, there charges were not high as compared to the other operators. Because of this, local agents were incurring losses. Chadar is one of the most sought after treks in the country. Also, getting so many people together to walk on the frozen river pollutes the environment,”  Stanzin Chotchan, founder of Zanskar Himalayan Exploration (a travel agency based in Ladakh) and an allied member of ALTOA told The Outdoor Journal over telephone.

Anil Srivatsa, founder of Trexpedition, a Bangalore-based trekking community seemed happy with the move. “As a conservationist I feel this move will prevent the outdoors from becoming a business, but will continue to create more jobs for the locals while reducing the burden on the environment that comes from bearing the weight of too many people continuously. Smaller groups are more mindful of the environment and clean up after themselves more diligently than mass groups led by outdoor companies that are reducing this thrust with nature to a pure business exploitation,” he told The Outdoor Journal in an email.

Smaller groups will help nature bounce back sooner and ready to welcome the next group to enjoy its splendor, as against the barrage of large groups destroying it with no hope of a recovery,” he added.

*The word Chadar means a white sheet in Hindi. In winter, the Zanskar river in the upper Indus valley in Ladakh freezes, resembling a white sheet, and walking along it becomes the only way to reach to the villages and towns on the other end