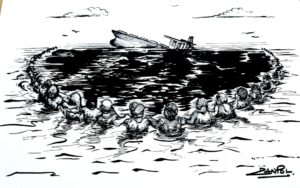 An Update: The Mauritian Oil Spill in Pictures

The ship that struck a reef in Mauritius, on July 25th, leaking tons of oil into nearby protected areas, has split apart, with its remaining fuel now spreading into the island’s turquoise waters.

The Japanese freighter, MV Wakashio, ran aground on July 25 and its hull began to crack after days of pounding waves. On August 6th oil and fuel began leaking from the ship, as a large gash appeared on the vessel’s side. The ship had been carrying 3,894 tons of fuel oil, 207 tons of marine gas oil, and 90 tons of very heavy lubricating oil. On the 15th of August, the ship split in two. By the time it broke open, 1,200 tonnes of oil had been transferred, by helicopter and marine barge, to shore and to another ship owned by the same Japanese firm. Approximately 116 tonnes of still oil remained on board and a further estimated 800 tonnes has leaked into the sea, of which 653 tonnes had been successfully removed from the water. By the time the ship broke high sea oil barriers had been put in place, with French naval assistance, and a skimmer ship was nearby.

US company Ursa Space Systems has analysed satellite radar data and says, “On 6 August, we detected a spill size of roughly 3.3 sq km surrounding the Wakashio… We released another detection on 11 August for the same area showing a near 10-times increase (roughly 27 sq km.”

The Wakashio was traveling from China to Brazil. The ship was 200 km off course and heading into the clearly marked waters of the UNESCO Ransar protected Blue Bay Marine Park and the Pointe d’Esny wetland. Point d’Esny is home to a 22Ha mangrove forest that provides shelter and food to fish, crustaceans, and birds, with a number of local people depending on it both directly and indirectly for their livelihoods. Nearby Blue Bay Marine Park home to 108 coral species, 233 fish species, 201 mollusk species, endangered turtles, and important mangrove areas. The lagoon is also the location of a famous naval battle featured on France’s Arc de Triomphe and contains many historic Napoleonic wrecks that have laid undisturbed for two centuries.

Vessel transponders show the MV Wakashio crossed the Indian Ocean and entered Mauritian waters just before midnight on 23rd July. Satellite tracking also reveals that the vessel did not slow down prior to impact two days later, on Sunday 25 July.  The data raises questions as to why the vessel’s GPS tracking did not indicate it was heading towards an impact with land and why local authorities did not intervene in time, given the ship’s clear trajectory toward the island.  In fact, comparing mainstream shipping lane traffic with the trajectory of the Wakashio would have revealed the ship had been on a collision course with Mauritius for several days.

Detectives boarded the Wakashio on Sunday and seizing the logbook and black box. Police are expected to take statements from the captain and crew of the Wakashio, after launching an investigation.

The pressure is mounting on the government to explain why more was not done in the two weeks since the ship ran aground. The first large vessel on the scene was the Mauritian Coastguard, who arrived four days after the ‘MV Wakashio’ had grounded and satellite data reveals that the second responder, a tug boat, only departed the capital city, Port Louis, on the 31st July six days after the ship had run aground.

“The world is crying with us”

The Mauritius government is also under pressure to explain why immediate action wasn’t taken to empty the ship of its fuel. Prime Minister Pravind Jugnauth earlier blamed bad weather for the slow response. Minister of Environment Kavydass Ramano says there was a procedure to follow… “Once a boat is wrecked, a salvage team is put in place by the insurance company under the supervision of a salvage master who replaces the captain and is the only authority on the boat,” he said. “The salvage team – Smit and Nippon Salvage – are the experts appointed by the insurers who provided us with the necessary good practices and took over on 31 July… They did not consider pumping the fuel and repeatedly told us that the risk of an oil spill was low.”

Mauritian environmental engineer Vassen Kauppaymuthoo however, believes the government is making weak excuses. “This is a matter of environmental emergency. It is a national security issue,” he says, “what a disaster. How did we get to this point when we could have taken actions much sooner?” Various groups in Mauritius are calling for a commission of inquiry into the matter and the opposition is calling for both Environment Minister Ramano and Minister of Marine Resources, Sudheer Maudhoo, to step down.

After the government declared an environmental emergency, in a wave of solidarity over 5,000 Mauritians, from all over the island, registered with local NGOs as volunteers, rushed to assist with the clean-up, including making makeshift oil booms from tunnels of fabric stuffed with sugar cane leaves. Some volunteers even donated their own hair (which absorbs oil but not water) to be used for the cause. Another several thousand others volunteered to clean up the polluted coastline without going through official channels.

Six experts from Japan arrived in Mauritius on 11 August to assist, and France has dispatched a naval vessel, military aircraft, a dozen technical advisers, and 6 tons of equipment from neighbouring Reunion Island after Mauritius appealed to French President, Emmanuel Macron.

In a country already reeling from the Covid-19 four-month shutdown of the tourism industry, the economic and ecological implications are likely to be devastating.  The country’s 1.3 million inhabitants rely heavily on tourism, which generated $1.6bn last year. “We are looking at thousands of jobs at stake on the east coast… We have no idea when we will be able to start work again. What we know is that our activities will be considerably slowed down with major difficulties on how to resume work,” said Thierry Merven, CEO of Beau Vallon who owns Preskil Island Resort at Pointe d’Esny, not far from the Wakashio wreck. “

“The world is looking at us and the world is crying with us,” said Sébastien Sauvage, spokesperson for Eco-Sud, a local environmental group. “We had a meeting with the experts from Reunion Island, who told us that we are looking at years of cleaning up that mess.”

Cover Photo: “Our paradise is not lost… Mauritians banding together to fight the Mare Nwar” (creole for Black Tide). Image credit: Zan Pol who can be found on Instagram here. 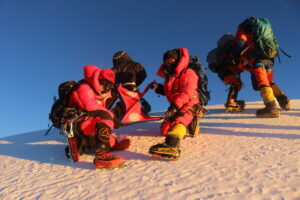