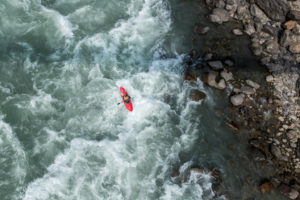 A new, tougher location at the confluence of two holy rivers, some last-minute entries and the undeniable community spirit made the fifth edition of Ganga Kayak Festival more than your average competition.

A clean sweep for Russia’s Egor Voskoboynikov and an honor for India’s Sohan Singh Rana.

The words ‘holy water’ and ‘religious ceremony’ aren’t exactly synonymous with a kayaking festival. But they were a trademark of the show at the Ganga Kayak Festival last weekend (17th and 18th February), along with tougher competition and more challenging rapids than previous years.

“We really wanted to make the competition tougher this year,” explained Bheem Singh Chauhan, co-founder and vice president of the festival. “We wanted to change the location, and find something more technical for our paddlers. We wanted more experienced people to participate,” he said. For the last four years, the festival took place in Rishikesh, on the calmer Golf Course rapids. The location shifted to Devprayag this year.

Devprayag is a small Himalayan town in north India, about 70km away from Rishikesh. It is also the place where two rivers, Alaknanda and Bhagirathi, join to form the Ganges. The confluence of the rivers makes it holy for its residents and visitors. It was the first time that the small town, usually known for its ancient temples and the confluence, was hosting an action sport event on a mega scale. For two days (and perhaps more), its narrow streets carved out of Himalayan rock were littered with men and women in colourful attire carrying kayaks, walking alongside the locals, the saints and ambling cows.

More than 50 experienced kayakers from nine countries participated in the sprint, slalom, boater-cross and mass boater-cross events spread over two days. They paddled on the 363m stretch from start to finish, through the ferocious confluence rapids of the Bhagirathi.

On the first day, they had to race the sprint and slalom. The sprint was a straightforward timed run from the start point to the finish point. The top 32 kayakers who finished in the least amount of time qualified for the boater-cross for next day. The slalom required the racers to touch flags kept on rocks (instead of navigating through poles) at various upstream and downstream points of the stretch. Several kayaks toppled, several kayakers ended up swimming after the first big wave.

The top 32 from the sprint qualified for the boater-cross the next day. The boater-cross required them to race in heats of four, taking a mandatory left line on the river in the beginning stretch, then navigating currents to touch flags kept on rocks at three different locations, and finish the race in the least amount of time.

Joe Rea-Dickins, kayaker and member of the All India Kayak Expedition, came third in boater cross. “It was my first time running this stretch, wasn’t too bad. But I wish to do this in moonlight, when the tide is high. That would be cool,” he said.

The mass boater cross was epic for spectators. It was open to all participants, and all they had to do was race, together, from start to end. They could take the line of their choice, they did not have to touch any flags. The first one to finish wins. At the word ‘GO’, 51 kayaks paddled together on the rapids, some toppling, some meandering, most making it through.

15-year-old Manish Rawat, the youngest participating kayaker, won the Mass Boater Cross. He raced his way to the finish point, and won the biggest prize. “I want to continue this for sure. I love playboating, and my grandparents are super happy that I love kayaking,” he told The Outdoor Journal after the competition. He lives with his grandparents in Shivpuri, and intends to travel far and wide.

Most of the participating kayakers were local and foreign guides and instructors working for various tour operators in the region, while some were simply traveling the country in search of good whitewater and happened to pass through the area during the festival. Egor Voskoboynikov and his wife, Ukraine’s Alona Buslaeva were on their way back from the north-east when they found out about the festival and decided to participate. Both are Adidas Sickline athletes and tackled the 363m stretch of whitewater with relative ease. While the Russian won an easy first in all competitions, Alona was one of the two female participants.

The absence of female athletes was conspicuous. At least five women are required to make their own category. There were two, so they played in the same category as the men. When asked if this is a global phenomenon, Alona said, “Yes, kayaking in general is a male dominated sport. I have no idea why though. Even in Sickline last year, out of 150 participants, only 25 were female,” she said. The 30-year old Ukrainian chanced upon kayaking eight years ago, when she had just finished her masters degree in architecture. “I went to a swimming pool and saw these guys paddling on a boat, and I was really surprised and interested,” she told The Outdoor Journal. “I was looking to take up a sport, tried it, and loved it. Then I forgot about architecture and just decided to travel the world and kayak.”

Naina Adhikari, India’s youngest female kayaker so far, was keen to participate. But lack of practice and the ferocity of the river made her uncertain, so she decided to back out. The 17-year old is from Nainital, another Himalayan town with only flatwater lakes. She is keen to take up whitewater kayaking as a career, and plans to get serious about it as soon as she finishes school. “I want to be India’s first truly competitive female kayaker,” she told The Outdoor Journal in a conversation. “And I am going to make it happen.”

30-year-old Egor Voskoboynikov has been kayaking since he was 10yrs. He is an Adidas Sickline athlete and has participated in, and won some of the toughest kayaking races in the world, including the North Folk Championship and King of Asia race. He and his wife Alona Busleava are currently residing in Georgia, and trying to promote kayaking in the region through their adventure tour company Two Blades Adventure.

For Sohan Singh Rana, who won the best Indian paddler award, “I want to help this festival grow so that we can get more younger talent in.” The 28-yr-old from Sirasu works as a kayaking instructor and divides his time between Norway and India.

Ganga Kayak Festival held its first edition in March 2013. “The whole idea behind the festival was to provide a platform for our Indian athletes, and a desire to see them perform internationally,” Bhupendra Singh Rana, founder and president of the festival, told The Outdoor Journal over email.

“That first year, we ran the festival entirely through volunteers, pitching in our own pocket money,” he said. A group of 13 kayaking and sports enthusiasts formed The Adventure Sports Society (TASS), under which the festival began to grow formally.

Over the years, the festival’s recognition has grown manifold. It produced athletes like Ayodhya Prasad, who went on to participate in Adidas Sickline in 2014, Sohan Singh Rana and Sanjay Rana, who have represented India in Nepal Championships. For the small, but growing community of competitive kayakers, who hardly get any support from the government, this is a big deal.

This year, the festival had several sponsors, including Uttarakhand Tourism, the state’s tourism department. Most of the support is local and comes from the community. For a complete list of sponsors and partners of the event, click here.

What makes this festival special, apart from the showcase of talent in a sport still nascent in India, is the camaraderie and warmth of the people. As Egor, a seasoned competitor said, “A race should be an excuse for kayakers to paddle together.”

Plans for the future? “We are hoping to make it bigger, and better organised, here in Devprayag,” said Bheem Singh Chauhan. “This year was a test, and now we know that it works, so this will be our spot. We hope to make it tougher, get more people to compete, and of course, more sponsors,” he said.