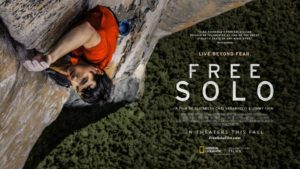 World-renowned for its epic glacial granite, Yosemite is the mecca for rock climbers. Back in the day, few pockets of passionate climbers who looked like they belonged at Woodstock, strapped on their colourful harnesses, and started climbing the granite in fairly rudimentary ways. From John Muir’s first ascent of Cathedral Peak in 1869 to the first ascent of half dome in 1875 by George Anderson, from Robert Underhill use of pitons in the 1930s to John Salathé creating steel pitons in the 1940s, from climbing’s greatest rivalry between Warren Harding and Royal Robbins in the 1950s to Lynn Hill free climbing the Nose in a single day in the 1990s—the Valley has seen many pivotal moments in its climbing evolution. In 2015, Tommy Caldwell and Kevin Jorgeson climbed the Dawn Wall on El Capitan, the hardest big wall free route in the world, garnering media attention from around the world.

However, on June 3rd, 2017, Alex Honnold did the unimaginable. He completed the first-ever free solo of El Capitan, a 3200-foot wall in Yosemite, completing his biggest life goal. He climbed the wall in 3 hours, 56 minutes, on Freerider (5.13a). Jimmy Chin was alongside him throughout the climb, shooting his process for the upcoming National Geographic produced documentary, “Free Solo”. In A National Geographic interview, Alex said he didn’t have any real moments of doubt. “The Freeblast was still engaging for sure. And the first roof (at the start of the third pitch), I’m always a little bit tense there because you’re just starting up the route. And the Boulder Problem was the crux. That was the main thing probably.”

“FREE SOLO follows my good friend Alex Honnold as he navigates life’s hard choices and prepares meticulously over two years to free solo El Cap, a 3200ft wall in Yosemite Valley. On June 3rd 2017, Alex achieved what we all thought was impossible. In reality, we didn’t even think it was impossible. Until Alex came along, no one was thinking about it, period. Hope you all enjoy the trailer and get out to see the film on the big screen when it releases in theaters in late September. Big shout out to the crew and particularly the best co director one could ask for (Chai Vasarhelyi) for their tireless work bringing this film to life through thick and thin over the last few years. And of course, thank you Alex for dreaming big and showing us what is possible…”, stated Jimmy Chin when he dropped a preview of the film on Instagram.

“People will try to understand Alex and what he experienced up there, but ultimately it’s for him and him alone. It was dangerous, risky, and incomprehensible—like all things wild and beautiful.”

Launching in theaters late September, look out for screenings here. In the meantime, follow Alex, Jimmy, and Chai.