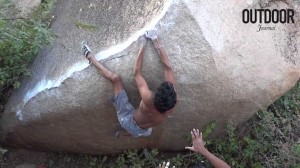 Ajij Shaikh: First Indian to send an 8a boulder

After chasing the title for two consecutive years, the four-time national champion ascended The Diamond, a day after Tuhin Satarkar became the first Indian to redpoint an 8b+

22 year old Pune-based climber, Ajij Shaikh, became the first Indian to send an 8a (V11) grade of bouldering with his ascents of The Diamond (sit-start) on December 15th and The Middle Way on December 31st, in Hampiin the Southern Indian state of Karnataka. After two weeks of crimping, ripped skin and near-finishes, Ajij completed The Diamond one day after fellow Pune-based climber, Tuhin Satarkar, became the first Indian to redpoint Ganesh (8b+ / 5.14a), India’s hardest sport route, in Badami.

Both problems were long-standing projects for Ajij, “I’d been trying both for the past two years and had my doubts when I started, but it felt nice being the first Indian to complete them”, said the four-time national champion who was in near disbelief, before breaking out into a victorious yell, post his ascent. Ajij, who kept falling at the top out, explained that using the last hold a bit differently did the trick. “A little change in my footwork also really helped”, he said.

On New Year’s Eve, he cracked Chris Sharma’s mega-classic, The Middle Way. To finish the crimpy, overhanging, granite power-problem, he had to study videos of Sharma and Canadian climber Sonnie Trotter doing the route. “His (Sharma) style was difficult, he’s taller than me and that makes a difference. The other approach suited me more”, Ajij said, adding that he had to plan very well where he’d go static and where dynamic. After falling twice at the top out, he completed it with world para-climbing silver medallist, Manikandan Kumar amongst others egging him on. “When he finally caught the last hold, everyone around him burst into happiness. There was such relief in his expression. It was wonderful” said Manikandan.

However, grim financial challenges loom large. He needs a steady sponsor and perhaps a job to support his family; only that will allow him to train hard and experience growth. Even these ascents were done with borrowed shoes, as he couldn’t immediately afford a pair. Getting sponsorships is very tough in India, which despite a thriving outdoors community does not have many major outdoor brands represented directly, but only through local distributors who are often disinterested in backing the community.

In the context of their achievements, Tuhin Satarkar (who receives Red Bull support) said “All of us are practicing like hell to enhance our climbing skills. If you hear about people climbing 8cs or 9as, that’s just the hard work talking; but the Indian climbing scene is definitely changing for the best!”

So why has it taken us this long to get here, in the first place? “It’s our thinking; we don’t try hard routes. If you don’t try hard grades, you’ll never know the kind of growth you require. 8a or 8b isn’t difficult; with effort, everything is possible” says Ajij, who dreams of climbing with American phenom, Dave Graham, one day.

But he’s optimistic, “8a is not enough for me, I want to do more 8b’s and 8c’s and open lots of new routes” he replies, when asked what’s next. For now, certain ghosts have been exorcised and he’s enjoying the after effects.

Note from The Outdoor Journal Team: “Climbing grades”, while subjective, are fairly consistent amongst grading systems around the world. A climbing grade essentially describes the difficulty of the climb- sometimes defined by the sender, and other times by a group of climbers that reach a common consensus. There are a variety of systems used around the world; the most popular however, are the American, British, French and UIAA free climbing grading classifications. For more information, see: http://aaj.americanalpineclub.org/extras/grade-comparisons/