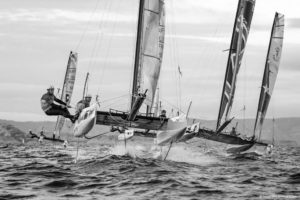 In 2017, the Extreme Sailing Series is set to become the place to fly as it boosts its foiling portfolio with the liveliest small catamaran out there, the Flying Phantom.

Adding the exciting Flying Phantom Series to the line-up at some of its global events will see another future-thinking development for the world’s leading Stadium Racing series, providing more thrills and spills for mesmerised onlookers to enjoy.

The partnership with Series organisers OC Sport, will see the Flying Phantoms take flight at a number of the European Extreme Sailing Series Acts, which will be staged on some of the most iconic patches of water in the world. With a fleet of 12-15 boats zipping around in some rather tight spaces, the racing promises to live up to the high-octane action that the Series has consistently delivered over the past decade.

“I am really thrilled to welcome the Flying Phantoms Series and cannot wait to see them tearing it up at our Acts,” commented Extreme Sailing Series Event Director, Andy Tourell. “Our aim is to help create opportunities and a development pathway for young sailors by providing them with a platform for competitive world class racing, while also enabling them to leverage our global media product to raise their profile.”

Tourell continued: “We already have a strong programme for providing opportunities for young sailors, and often welcome local optimist racing in our venues as part of our Acts. The addition of the Flying Phantom Series will ensure a real festival of sailing for spectators and VIP guests to enjoy throughout the day.”

The Flying Phantom is like a scaled-down version of the GC32 catamaran raced by the world-class teams in the Extreme Sailing Series. It is sailed by a crew of just two and benefits from a similar hydro-foil set-up, which means that as the boat gets up to speed it lifts off the surface of the water and accelerates rapidly.

To get the most power from these pocket-rockets, the crew hang off the sides of the boat on a trapeze – a wire that runs from the mast to the waist of each sailor – which opens the door for some spectacular action.

Thomas Normand, Flying Phantom Class President, welcomes the partnership: “We have the powerful boat and the exciting racing and now, collaborating with the Extreme Sailing Series, the leading event of its kind, we have the platform to showcase our amazing class to the sailing world and develop a new generation of foiling racers.”

With the Extreme Sailing Series bringing sailing to within metres of the shore and drawing spectators in their thousands to watch the Stadium Racing, it presents an opportunity for the fresh-faced Flying Phantom sailors to shine on the global stage.

Normand elaborated: “The international media network that the Series attracts could soon be communicating about the next generation of foiling masters as they take their first steps on this brand new development pathway. In the not too distant future we could well see young athletes who found their feet in the Flying Phantom class ‘graduate’ to the Extreme Sailing Series, competing in some of the top teams on the planet.”

Thibaut Vauchel-Camus, a regular skipper on the Flying Phantom Series was equally as enthusiastic about the partnership, commenting: “The Extreme Sailing Series provides a platform to bring the sport of sailing to the public. Having taken part in the Series myself in 2009, I know how incredible it feels to sail in front of an audience, something not many sailors get to experience. The Flying Phantoms are an excellent gateway for young sailors to get into the world of foiling boats.”

The season finale of the 2016 Extreme Sailing Series in Sydney is just around the corner and it’s all to play for. From then, there isn’t much of a let up as preparations are already underway for 2017. With two new venues in the USA and Mexico and the addition of the Flying Phantom series, the Series has the foundations laid for yet another phenomenal year of world-class sport.

For more information go to the Extreme Sailing Series website.