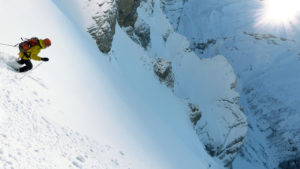 His latest chase added a few broken ribs to his Saturday afternoon.

“So, here is my Saturday adventure…”

With the hopes of a start-to-finish on skis only 5kms from his home in Switzerland, Sébastien de Sainte Marie set out to the east face of Rautispitz a couple of weekends ago. With only 20ms to go, a piton he’d placed himself came out, taking him and his rope with it.

With some research, Sébastien could find no evidence on the mountain or internet of anyone else attempting to ski the face before him, and although there were parts of it that were beautiful, he says it wasn’t his most enjoyable descent.

When asked how he’s feeling about the sport he loves, despite it’s dangers, Sébastien says he “made a judgement mistake that could cost my life, but I know what I did wrong.” He knows that “life goes on” and he has plenty of projects (ski and photography) coming up with his partner, Nati, to keep him busy.

As a doctor herself, Nati had already spent a long night working in a hospital only to have to return shortly after to take care of—without scolding, her favourite patient. Assuring her she would be able to sleep okay, Sébastien has promised not to attempt the east face of Rautispitz, or mixed faces with poor snow again.

Even with a trip to the hospital, 3 broken ribs, “and a colorful rainbow on my leg,” Sébastien considers himself very lucky. We feel the same way!