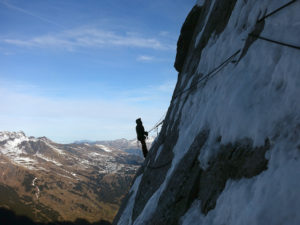 In 1991, legendary American alpinist Jeff Lowe was alone, 1,000 feet below the summit on the North Face of the Eiger—the most serious and coveted wall in the Alps. “I was trapped in a little cave for 1 day and 2 nights by snowfall and massive spindrift,” Jeff says. “Somewhere in the day I heard a strange music, not melodic but resonant to my core. Gazing out at the flowing tapestry of music, my awareness left my body and ego and went on a grand tour of the cosmos.” Then quite suddenly, the spiritual and metaphysical encounter over, Jeff says, “I found myself back in the cave staring out at dwindling spindrift and glimpses of blue sky.”

After emerging from the cave, Lowe continued to the top of the mountain, capping a nine-day first ascent of Metanoia, arguably the Eiger’s hardest and most mysterious climb, and without question one of its boldest. Lowe’s ground-up, solo ascent of the climb only became that much more impressive in the ensuing 25 years, as Metanoia remained unrepeated, shutting down numerous suitors (including the “Swiss Machine” Ueli Steck), its aura of intrigue only growing greater.

Finally, on December 30, just under 26 years after Lowe’s dazzling ascent, Metanoia saw its first successful repeat. Thomas Huber, Roger Schaeli and Stephan Siegrist started up the route on December 29—their third attempt of the month after two unsuccessful forays up the wall—and topped out the very next day.

Thomas Huber, one of the leading climbers in the world over the past few decades, had been enamoured with Metanoia for quite a while leading up to the trio’s ascent.

“Jeff was always in my mind as an idol, a climber who had broken new ground,” Huber says. Preparing for a trip to climb another unrepeated Jeff Lowe line on Latok I in the Pakistani Karakoram, Huber became close with Jeff. And then he saw Jeff Lowe’s Metanoia, a documentary film about Lowe’s daring Eiger climb. “It blew my mind,” Huber says. “In my view, it is one of the best climbing movies ever made, because climbing isn’t just about success or trying to be a hero, but about finding ourselves and discovering new perspectives. With Metanoia, Jeff changed his perspective.”

As he became friendly with Lowe, Huber was more impressed by the man in his current stage of life than the accomplishments of his heyday. Since the mid-2000s, Lowe has been suffering from an “unknown neurodegenerative process” that bears a very close resemblance to ALS (Lou Gehrig’s Disease). Wheelchair bound, having gradually lost his most basic motor skills, Lowe still fights on each day, promoting causes he believes in and doing it all with a smile.

“I’m more impressed by what Jeff’s doing at the moment than by his climbing skills,” Huber says. “To be honest, he’s an example for the whole human race. He’s not angry about what happened to him—he’s just happy for every morning and evening he can see the sun rise and set.”

After his Latok I expedition this past summer, Huber says, “I knew I had to climb Metanoia. To follow in Jeff’s tracks.”

Roger Schaeli and Stephan Siegrist are two of the most accomplished Eiger climbers of all time. Schaeli has climbed the North Face by numerous routes some 39 times now, and Siegrist has a similar total.

In early December 2016, Huber reached out to Siegrist to see if he would be interested in attempting Metanoia. Siegrist jumped at the chance, and suggested Schaeli as a third member of the team. Schaeli had twice before climbed the Japanese Direttissima route on the Eiger, which parallels Metanoia very closely. Ueli Steck had tried Metanoia several times before but had difficulty following Jeff’s original route. Having Schaeli along would be an asset as he would be able to tell them if they were off route and accidentally on the Japanese Direttissima instead.

Huber says the decision to climb as a three was a no-brainer: “I thought our best chance would be to climb it with partners. I didn’t need to climb it solo like Jeff. The achievement was his. We just wanted to highlight it and repeat the route as a gift to him.”

Back on level ground, Huber, Schaeli and Siegrist quickly made plans for another attempt. Huber and Schaeli restarted the route from the bottom on the 27th (Siegrist had to work that day). The pair made good headway, fixed ropes back to the base, and spent the night on the ground.

The 28th saw the team’s efforts stymied again: spindrift and strong winds made climbing a non-option.

On the 29th, at full-strength once again, the team resumed their assault. They started from the Stollenloch—an opening onto the cliff face from the tunnel system within the mountain. They made steady progress and spent the night of the 29th on the wall.

On the 30th, they came to the selfsame cave where Jeff Lowe had had his transformative epiphanies and “tour of the cosmos” during his 1991 first ascent. Though they had planned to spend a second night on the wall in Jeff’s cave as an homage to his climb, Schaeli balked when he saw it: “It was such a small, flat, uneven place. I couldn’t imagine that Jeff had been there for two nights.”

Seeing the cave, thinking on what Jeff must have gone through, still in the middle of the route, Thomas Huber had his own moment of awe to parallel Jeff’s awakening: “What Jeff did in that moment, I really can say, is the biggest achievement ever made by a human as a climber, as an alpinist.  Solo, no bolts, scary climbing. Totally alone.”

Leading the upper pitches, Schaeli found himself once again thinking about Lowe. “It was really inspiring to think that Jeff climbed these pitches, solo. There is lots of loose and broken rock, and it’s quite steep. I could feel the heart of Metanoia. Jeff must have been willing to take a lot of risk, because there are definitely no fall zones. What he did was a major act of commitment.”

Towards the top, faced with a choice between a steep chimney and a mellower traverse, Schaeli went with the former and found himself thinking he had taken the wrong path. “I thought ‘No way this is the right way,’ because it was so steep and scary,” he says. And then, ten meters up, he found a vestige of Jeff’s time on the route, an echo from 26 years prior: an old, rusted and weary cam.

The level of difficulty that Huber, Schaeli and Siegrist encountered on the route was formidable. “If you use peckers”—a type of aid climbing protection—“the rock tends to break,” Schaeli explains. On the Hinterstoisser Traverse, Schaeli struggled on lead. “It was very hard to protect,” he says. “I had a bunch of falls before I could finish this section,” which ended up taking him nearly an entire day.

At one belay station, Siegrist installed a lone 8 millimeter bolt to fortify a dangerously unstable anchor. While Schaeli was ascending a fixed rope to join him, one of the other pieces in the anchor even failed. Lowe used no fixed gear on his 1991 ascent, climbing in the purest of styles, and the Huber-Schaeli-Siegrist team wanted to honor those ethics. They placed no other bolts on the rest of the route, and only decided to place the single 8 mm bolt for safety purposes. “It was a clear choice for Stephan to place the bolt,” Schaeli says. “Jeff had been climbing by himself. We were three of us with heavy packs. That’s a lot more weight on the anchor. We all have families we want to see again.”

In 1991, after 9 days on the wall, having emerged a changed man from his hermit’s cave, Jeff Lowe was 60 meters from the summit ridge and utterly exhausted—physically, mentally, emotionally. Ready to be off the wall and chart a new course in his life, he untied from the rope, abandoned his backpack, and soloed to the summit ridge, where he was rescued by a helicopter. His backpack remained frozen in the ice for 20 years, until Josh Wharton recovered it during the filming of the documentary film, Jeff Lowe’s Metanoia.

Schaeli had passed the pack on prior ascents of the Japanese Direttissima before Wharton removed it, and so knew where it had been. When he, Huber and Siegrist reached that spot he knew they were almost done.

Topping out by starlight, the climbers were elated. And, like Jeff Lowe, no doubt changed by the experience.

Once back on the ground on the night of the 30th, the trio immediately called Jeff to share their news. The climb was a thing of beauty, they told him.

Jeff received the news with excitement and humility. “I’m happy and gratified that they found the route to be hard, bold, beautiful and ‘visionary,’” he wrote on Facebook. “Best of all, Thomas understands what I was doing with the climb; which was trying to create an example of how alpinists can progress in an environmentally conscious way that honors the spirit of extreme alpinism. Metanoia continues to give new insights into the vibrating heart of reality. Every so often an ‘ah-ha’ moment occurs, and like the petals of a flower of exquisite beauty, my heart and mind unfold a little wider. I am so happy that Thomas, Stephan and Roger have finally repeated the route. Their confirmation of the quality of Metanoia is very gratifying and quite humbling.”

For more info on the climb, Jeff Lowe, and to see the full documentary Jeff Lowe’s Metanoia, visit http://jeffloweclimber.com/index.html.

Feature Image: Located in the Bernese Alps, the first ascent of the Eiger was made in 1858 by Christian Almer, Peter Bohren, and Charles Barrington. Image © Thomas Huber/Roger Schaeli/Stephan Siegrist