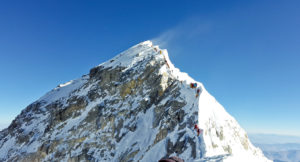 Last year, Nepal banned an Indian couple from climbing in the country for 10 years after they faked a photograph showing them on the summit of Everest.

Now, climbers attempting the world’s highest peak this year are supposed to wear GPS tracking devices to stop frauds, as well as to track those in distress.

On June 5 2016, Dinesh and Tarakeshwari Rathod, a married couple, announced at a press conference that they had summited Everest successfully. They claimed to have stood at the top on May 23. They were granted a certificate from the Nepalese government, acknowledging and validating their climb. Media outlets all over the country congratulated their achievement, including various police departments. Unfortunately for the sneaky duo, veteran mountaineers were quick to prove that they had doctored their photos. Nepal’s tourism department opened an investigation and shortly after their “historic climb”, they were banned from climbing in the country for 10 years. Over 400 people reached the summit that season. Now, climbers who reach the 8,850m (29,035ft) summit have to produce photographs, a report from their liaison officer at base camp, and GPS coordinates proving they’ve indeed summited the peak. The Tourism Department will be trying this new method out on new climbers this season, to see if it is effective. Once climbers return to Kathmandu, GPS data will be checked. Another use of these devices is to track teams and send rescue units if they’re in trouble.

Jake Norton, world-renowned climber, told The Outdoor Journal, “First off, I’m doubtful it’ll be foolproof. If someone is so desperate to claim an Everest summit that they’d fake a photo or otherwise spoof their success, then they’ll figure out a way around a GPS tracker as well. I think this is ultimately a bandaid on a much deeper problem that is not one the NMA can solve: It’s a problem of our priorities and warped vision of what success is. We call standing on the summit a success, even if done in poor form, while not reaching the tippy top but having an ethical, enjoyable journey is routinely dubbed a failure. The issue with Everest and beyond is much deeper in my mind than faking a summit, and more problematic than a technological fix; we have an ethical and philosophical lapse in much of climbing where the barometer of success is planted squarely on the top when it should be on the process, the ethics, the style, and the substance of the journey, summit or not.”

On May 1, 1999, when Jake was 25, he was on the team that located the remains of George Mallory on Everest. Since then, he has returned to Everest six times. He founded Challenge21, a multi-year climbing and fundraising project dedicated to the global water crisis. Jake produced and directed High and Hallowed: Everest 1963, along with David Morton.

Dawa Steven Sherpa, a Nepalese Sherpa entrepreneur, stated, “Giving climbers GPS devices has been in talks for about three years or so- the Ministry of Tourism brings this up from time to time- they were discussing different ways to better tourism in Nepal. After two Indian climbers faked the summit, the government was asked how they would respond to the situation. Because they were pushed into a corner, in my opinion, they said they would deal with it this way. It’s not an easy job. I don’t know how they’re going to implement this. It’s hard enough for me to track my team, let alone hundreds of climbers. It’s not easy to do. I don’t think it’s a practical solution. How are they going to verify that the person who was given the GPS is the one who uses it at the summit? For example, you could give it to the sherpa, he gets a bonus and the ‘climber’ gets a summit ascent. Who is going to verify it’s actually you who did it?”

Dawa has climbed Mt. Everest twice. He runs the “world’s highest bakery” at Everest base camp (5330m) and started the “Cash for Trash” cleanup campaign on Everest. His environmental efforts have been recognised worldwide, including by bodies like the World Wildlife Fund (WWF) and the International Mountaineering & Climbing Federation (UIAA).

Amit Chowdhury, mountaineer and VP of the Indian Mountaineering Foundation (IMF) offered his thoughts, “We believe that mountaineers are gentlemen until proved otherwise. A lot of people going to climb Everest today are tourists, not mountaineers. A mountaineer’s word is his/her bond.”

In 2005, Amit led the first Indian Air Force expedition to Everest from the north side. He received the Tenzing Norgay National Adventure Award in 2014.

Dr. Anil Gurtoo, a mountaineer and expedition doctor said, “This could only help differentiate true or false summit claims, if it works. The battery needs to operate in harsh conditions. For navigational purposes, the users must be familiar with the technology. If the weather is bad, chances are the GPS won’t work. However, GPS-enabled radio sets may be of better value when it comes to tracking. A communication device must be implemented. The personalized locator beacons (PLBs) may also be a good option, like those used in submarines. They are designed primarily to send out a personalized emergency distress signal for 24 hours.”

Pete Takeda, world-renowned climber and mountaineer, is also the author of An Eye at the Top of the World, an epic tale of spies, clandestine missions and climbing in the Garhwal Himalaya. He told The Outdoor Journal, “These days Everest is rarely the goal of technical climbers—more a prize for trophy hunters. It’s no surprise then that the unscrupulous will lie and authorities would desire confirmation. The honor system is reserved for those who climb for the usual reasons—deep personal reward—not public recognition. That the highest mountain in the world needs a system of accountability says something about human nature.”