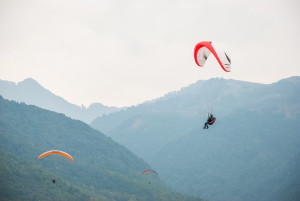 When it comes to paragliding, there are few countries which produce paragliders the way France does. It will be no different this time when the world’s best paragliding pilots gather at Bir-Billing for the Airports Authority of India (AAI) Paragliding World Cup (PWC 2015).

Quite easily the strongest nation in the world of competitive Aero Sports, France will have 14 pilots from among the 100-odd men who will be competing in the last week of October at Bir-Billing reckoned by most as the second-best site for the sport in the world.

That should come as no surprise, since the current Top-100 of the world has as many as 33 French pilots, which makes it one-third of the top pilots. The current squad has a series of champions, who have won World Cups and Superfinals and some others who have held the World’s No. 1 spot.

The team which will be here in Bir Billing is a fair mix of youth and experience. While a bunch of them have won or been placed in top-3 and top-5, a lot of others are at the beginning of their career.

Mr. Sudhir Sharma, President, Billiing Paragliding Association said, “The French pilots have always been a major force to reckon with and they have a great system in place for training and encouraging pilots. I am sure their pilots will be among the top contenders at AAI Paragliding World Cup.”

On the matter of training, Mr. Rajesh Srivastava, Vice President, BPA, added, “The French have also developed an efficient system for training and when we have the National Institute of Paragliding and Adventure Sports, we want to do that and get the best from all over the world.”

Two of the French pilots, who will be at Bir-Billing have won Superfinals -Maxime Pinot won the 2014 Superfinal in Turkey and Yann Martail won Superfinal at the same venue in 2010. Martail has also won two other World Cup titles.

Besides this duo, Julien Wirtz, who is still looking for his first World Cup or Superfinal success, he has held the World No. 1 spot for almost 20 months in the past 25 months making him one of the most consistent pilots in the world today.

Stephane Drouin, Dennis Cortella and Cyril Lambert have also won World Cups in the past. The French pilots are so consistent, that there is hardly a World Cup event, where a French man is not among the leading finishers in Top-5 or Top-10.

In addition, the likes of Frederic Sinatti, Jonathan Marin, Sebastien Coupy, Clement Latour, Emmanuel Nicolas, Julien Brung and Ludovic Farnaud, are all capable of winning, having placed well in many other competitions around the world.

Didier Mathurin, a professional coach, who has been instrumental in the growth of Team France’s paragliding, feels that one of the reasons for this has been an organized structure for Paragliding in the country. The fact that the French team has a national coach for paragliding is ample proof how seriously the sport is taken.

In a recent edition of international magazine, Cross Country, a well-known magazine on various aero sports, including paragliding, Mathurin was quoted as saying, “Yes we have a big pyramid of pilots in France. But it’s one thing to have a lot of pilots at a good level. It’s another to develop pilots to a world class level.”

Mathurin, who was a former mountain guide and ski instructor, was the coach of France’s National Hang Gliding Team till 2008 before coaching the French national paragliding team. He has been in charge since.