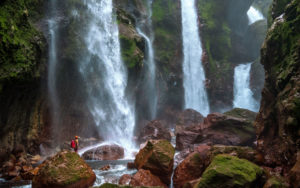 Daniel Rocchi and friends recently made the first descent of a new canyon in Costa Rica, a country that holds vast, untapped potential for canyon exploration.

Over the course of their expedition, they faced close calls rappelling down monster 400-foot waterfalls and death-defying plunges into pools below them, never quite knowing what was around the next corner.

Costa Rica is “virgin territory” as far as canyoning goes, according to former firefighter turned translator-canyoneer Daniel Rocchi. At 37 years old, Rocchi — who is half-Italian and half-Irish but has lived in Costa Rica for most of his life — has done “almost exclusively first descents” in the country.

And just recently, with friends from the local Toros Canyoning Group, Rocchi completed one of his most stunning first descents to date.

Poas, a Costa Rican volcano, rises about 4,600 feet above sea level, and is covered in verdant vegetation. On Poas’ slopes, Rocchi and the Toros identified a striking canyon with the Quebrada Gata river snaking through it. Carrying the volcanic minerals from the volcano, the Quebrada Gata colors vary from turquoise to deep blue. The Toros knew they had to go explore. What they found were massive waterfalls, dangerous rappels, and a tropical wonderland.

The Outdoor Journal caught up with Rocchi to ask him about the Toros’ descent and find out more about the nascent canyoning scene in Costa Rica.

Who are the Toros? How did you guys get started canyoneering?

Most members of the group come from a caving background. While there are caves in Costa Rica, they are limited to a few specific areas of the country where there is limestone rock and they are fairly limited in size. When we learned the techniques required for canyoneering (such as being able to retrieve the rappel rope, contingency anchors, etc.) a whole new world of exploration opened up for us. Costa Rica is a tropical country with an annual rainfall of around 100 inches, but mountainous areas receive as much as 25 feet of rainfall, so there are plenty of mountainous rivers and streams that have carved beautiful deep canyons that have never been witnessed by the eyes of mankind. From fairly tepid cave explorations we suddenly discovered we had world class canyoning routes waiting to be explored.

When did you guys make this first descent? How else completed it with you?

The first part of the first descent was on January 21, 2017, in the lower section of what we baptized Cañon Gata Fiera (Fierce Cat Canyon), along the Quebrada Gata river.

It’s a relatively short segment: just short of a mile in length (1,449 m), dropping a little over 1,000 ft (350 m) with very unpredictable flow levels than can go from manageable to lethal in a very short timeframe.

Completing the whole route required 4 attempts in total. On previous occasions we had to abort prior to the point of no return (a 400 feet waterfall that is the crux of the route) due to bad weather and the risk of flash floods.

The team changed slightly with each attempt, since there’s seven of us in Toros, but only four participated in our latest attempt: Johan Aguilar, Scott Trescott, Victor Carvajal and myself.

How did you guys find the canyon?

We’ve been studying and systematically exploring the area since we formed as a group last year. We use topo maps and Google Earth and scouting trips to identify the most ambitious routes. One of our team members, Jean Paul Dinarte, is a wizard flying his DJI Phantom drone, so he’s been very helpful at gathering intel prior to trips. Once we have all of the info we can get, we figure out the logistics and come up with an approach plan.

Is Gata Fiera Canyon hard to get to?

This particular route segment actually has a real easy start: a road passes right by where we enter the river. The hard part is getting out of the canyon after it drops 1,000 ft into the larger Canyon of the Toro river, which is surrounded by jungle and very steep cliffs on each side.

At first the river flows almost flat, with only a couple of small rappels and a few natural water slides. It’s cold, so we used thick wetsuits, but other than that, it seems fairly innocuous at first.

It’s the last 600 meters where the difficulty ramps up significantly. The walls grow taller and close in, forming a narrow slot, which ends in a 200 ft waterfall dropping into a large pool in a deep ravine. That first rappel is a beautiful hanging glide; the waterfall jet was shooting above and beyond us as we descended. After that it was a short downclimb following the river until the final “monster section”: a 380 feet multi-pitch drop with strong, potentially lethal flow and a uniquely funneled and twisting shape.

We started down this section, but after dropping 100 ft we reached a tiny rock platform where we needed to bolt a new anchor, but it was right next to the waterfall’s spray and so we couldn’t use the power drill. It was late in the day and dark clouds were closing in, so we decided to abort through a complicated escape route to avoid the risk of a flash flood. Rain and canyoneering don’t go well together. Flash floods can form and they can spell disaster or death for a team mid-descent.

On our final attempt at this route, the power drill stopped working right in the middle of this section again, so we were literally stuck hanging more than 200 feet off the ground. Fortunately the power drill suddenly sprung back to life at the last minute, we were able to put in a final bolt and by extending one of the anchors with some 7mm cordelette we were able to safely reach the ground and complete the route.

What techniques do you guys use on your descents?

Hiking and rappelling is what we spent the bulk of our time on. The hikes usually have a good dose of downclimbing involved, and because of the strong currents, the rappels are oftentimes quite technical and involved rigging a contingency anchor, so that if someone gets stuck in a strong current the person at the top can control the abseiler’s descent from the top anchor.

Jumps are a GREAT way to save gear. On a first descent, you often don’t know exactly how many rappels you will be facing, and thus you’re not sure regarding the amount of gear that you will need to leave behind on each rappel (fixes, webbing, quick-links, etc.). One way to save gear, is by jumping. Of course, breaking a leg in a difficult canyon can be lethal, so we generally send down our lightest team-member rapping off a human anchor (meaning a rope tied to the rest of the group acting as counterweight). The first guy down can test the water and check if it’s deep enough for the rest of the team to jump. If he gives the ok, we can save a lot of time and gear by simply jumping.

Do you think there are a lot of other opportunities for first descents in Costa Rica?

Absolutely. Costa Rica is an unexplored treasure. We are a tropical country with high mountains, hundreds (if not thousands) of rivers and a very rainy wet season that has sculpted some amazing canyons. But at the same time, canyoning is very new here. Near the beaches and tourist areas there are a lot of lightweight commercial canyons available for tourism, but exploration canyoning is almost unheard of in this country.

We have managed to find some world-class routes (a few are multiple day routes with dozens upon dozens of waterfalls) on the slopes of Poas volcano, but we have even higher mountains running down the central spine of the country, so I’m certain we have only barely scratched the surface. If the explorations we have scheduled for this dry season are fruitful, I’m positive that Costa Rica will be on the radar of all the top canyoneers very soon.