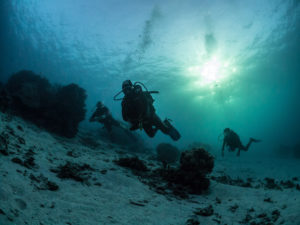 In search of the remote and unique, Sarah Kingdom discovered a scuba divers’ utopia with some of the world’s richest reefs, an incredible diversity of tropical fish—and even a rogue gang of hippos!.

For Part 1 of Sarah’s (not so simple) journey to get to the ominously named Mafia Island, head here.

Given its location and the presence of the marine park, it’s fairly obvious that the bulk of activities on Mafia Island are centered on or around the water. Most of the outstanding dive sites in Mafia lie within Chole Bay, a vast circular enclave of over 50km², off the South-East coast of the island, where the water depth ranges from 5-27m and there is a tremendous variety of coral, fish and other marine species.

With the tides, Chole Bay empties and refills every six hours and it is this continuous exchange of water that has kept the bay a haven and protected the coral from damage and coral bleaching by the El Nino which obliterated corals in other parts of the Indian Ocean in 1998. Over 50 genera of coral, more than 460 species of fish and five different species of turtles have been recorded in the waters around Chole Bay. There are excellent examples of giant table corals, delicate sea fans, whip corals, and huge stands of blue-tipped staghorn corals, large predatory fish and turtles are common and are surprisingly unruffled by the appearance approaching divers.

I learned to scuba dive many years ago, but it had been a long time since I had last dived. We are not talking brass diving helmet and lead boots times, but still long enough ago that I felt I had quite probably forgotten most of what I had once known. A trip to Mafia however, would not be complete, without visiting its underwater world. Fortunately I was able to do a quick refresher course and given the green light to don wetsuit and tank. We managed three truly beautiful dives, all inside Chole Bay, and saw an incredible array of various fish, corals, and other sea life.

From the minute we boarded the traditional wooden jahazi/boat to head out to the dive site we knew we were in for a treat. The captain cut the engine and unfurled the sail with an enormous seahorse emblazoned on it. Our multilingual dive instructor talked us through some last minute instructions and then we lay back, in the sun, on some thoughtfully positioned, enormous deck cushions and sailed our way out to the reef. Everything about diving on Mafia is fabulous, from the boat ride out to the dive site, to the amazing experience that waited for us beneath the surface of the water. Stingrays to barracudas, giant clams to tiny anemone fish, trigger fish, angel fish, butterfly fish, trumpet fish, star fish, vibrantly coloured corals and enigmatic turtles, right down to the minute colourful nudibranchs and leaf fish, I could go on… we saw it all.

Different to the scuba, but just as spectacular, was the snorkelling in Chole Bay.  It was hard to believe how much there was to see just below the surface of the water, with only a mask, snorkel and fins. A deep breath and some vigorous kicking and it was easy to go down and investigate lobsters hiding between rocks and sea urchins bristling between soft corals. Everywhere I looked there were vibrant, shimmering fish darting about; a mesmerising display of colour and movement passing before your eyes as you drifted past.

A definite snorkeling highlight of Mafia is the whale sharks, and if you are there at the right time, October to February being the best, you can swim with these gentle giants just a few hundred metres off shore. There are only a handful of places in the world where whale sharks are known to visit all year round, and Mafia is one of them (though spotting a whale shark out of the prime season is rare). Whale sharks are the largest fish in the ocean, maturing at about 30 years old, often living into their 60s and known to reach sizes of up to 14m. Swimming with them is a truly awesome experience. Whale sharks are generally solitary animals, however aggregations are found in several locations around the world including Mafia. The sharks come to Mafia to feed on zooplankton and the eggs and larvae of breeding fish and crabs. The World Conservation Union lists whale sharks as ‘vulnerable’ and at a high risk of extinction in the foreseeable future and the WWF has been funding a whale shark research programme on Mafia since 2012.

Boats out to the sharks are able to move quietly and visitors can hop in and snorkel to get a closer, underwater, look at the gentle giants. The locals call the whale sharks Papa Shilingi; ‘papa’ meaning shark and ‘shilingi’ meaning coins, because the bodies of these beautiful creatures look like they are studded with coins. Whale Sharks are in fact identified by their individual ‘spot patterns’ which are much like human fingerprints in that no two are the same. Tourists spotting whale sharks are encouraged to upload photos and sighting information to the WWF website, to help track the animals.

In the unlikely event that you do eventually tire of the underwater world of Mafia, or perhaps have just become a little too waterlogged, then there is an abundance of things to do on dry land. Another organisation involved with wildlife preservation in the archipelago is Sea Sense, who have been working in partnership with local communities to promote and protect marine turtles (green and hawksbill) by training local villagers in conservation, and employing them to monitor and protect turtles who nest on the islands.

Sea turtles have been nesting on Tanzanian beaches for over 150 million years and between June and September it is possible to see this amazing phenomenon for yourself. We took a 30 minute ride in a traditional wooden boat to Juani Island, where we moored at the base of some of the biggest and most beautiful baobab trees I have ever seen. We walked across the island, through dense rainforest, to the eastern beach where we witnessed, and counted, 87 newly hatched baby turtles make their instinctive and somewhat erratic scramble from the white sandy beach to the warm Indian Ocean Waters. As they reached the water’s edge some of the waves proved a formidable obstacle and a number of the babies were, quite literally, swept off their feet and deposited, on their backs, further up the beach and had to try again. By this stage a couple of the hatchlings were clearly having second thoughts and halfway to the water’s edge they turned around and tried to head back to the nest. It was very tempting to reach out a helping hand and save them the ordeal, but it is strictly forbidden to touch or interfere with them in any way. Eventually they came to their senses and we felt like proud parents at a school athletics day as they finally reached the water and disappeared. On average only one in every thousand of these babies will survive to adulthood, but those who do, will return to the waters around the islands to mate and the females will lay their eggs on the very same beach where they hatched 30 years earlier.

Since Sea Sense set up operations in 2001 over 2,100 turtle nests have been protected and 140,000 hatchlings have safely reached the sea.

Located between Juani Island and Mafia Island is tiny Chole Island. Chole is a fertile island with a population of about 1,000. Its inhabitants make their living from boat building, fishing and some limited farming. You reach the island via a ten or fifteen minute trip on a traditional wooden boat and you can do a short walk around the island, through the villages. Living, as I do, in rural Zambia, a walking tour of the village was not particularly unique for me but there were a number of sites to see, one of which was the trees full of Comoros fruit bats (flying foxes) excitedly chattering and squabbling, as they started to wake up before their nightly foray to forage for food. The other interesting thing we came across on the island was a selection of ancient ruins, some Arabic and stretching back as far as the 12th century and some much more recent German ruins from the 19th century. These ruins hint at a past that stretches back to early Omani slave trading days. Nature has reclaimed much of the ruins and many of the walls are now smothered with dense foliage, overgrown with giant figs and in danger of disappearing under plants that have grown from seeds dropped by bird many years ago. It was interesting also, to catch a glimpse of Tanzanian island village life, and see some of the traditional wooden boats, called jahazis and ngalawas, being built.

Hippos may well be a common sight in Africa, but they are not at all what you expect to find on a tropical island. Nevertheless a rogue gang of reclusive and seldom spotted hippos can, in fact, be spotted in a network of lagoons the north western part of Mafia Island.  Nobody knows for sure how they got there, but the best theory behind their presence on the island is that they washed over during floods, from the Rufiji Delta on mainland Tanzania. The waters between Mafia and the mainland are relatively shallow, in the grand scheme of things, and believed to have been even shallower in the past, making this ‘flood water’ theory plausible.  The first record of hippos on the island comes from the late 1800s, and today there are still a handful of them. Years of inevitable inter-breeding in a small population and probable malnutrition have led some to some suggestions that these are pygmy hippos, but there has been no research to back this theory up and it seems pretty unlikely… most likely they are simply inbred and hungry!

All good things must come to an end sadly, and after six magical days on Mafia it was time to leave. As we headed to the airport we were already planning our return. Mafia is one of the most unique and perfect destinations you will ever find, with some of the richest reefs in the world and an unparalleled variety of corals and incredible diversity of tropical fish. The sand is white, the water is warm, the people are friendly and welcoming, but best of all Mafia is perfect for solitude, nature and complete relaxation.

For Sarah’s recommendations on where to stay on Mafia Island, read Part 1.