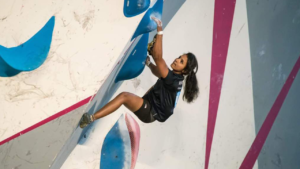 A growing number of young female Indian climbers could soon take the world by storm.

Female Indian climbers, a growing demographic, will one day be known by many.

Adventure sports are rarely seen or heard of in mainstream news in India, unless we win a gold or a silver at a World Championship. Climbing as a subset of that goes completely unnoticed. When it’s talked about, it’s mainly as a male sport, even globally. We know very little on female Indian climbers, who’re equally winning medals and traveling the world for the love of this sport.

She battled against cancer but that didn’t stop her.

Climbing has seen a transition from requiring physical strength to needing more of logical thinking. When climbing a wall or a rock, one has to be tactical and efficient. In this light, it isn’t hard to imagine that such a sport can be enjoyed and perfected by anyone, man or woman. That’s how some Indian girls gained confidence to try climbing, and led the way for others to take up the sport. A few of them had support systems, and others had to battle it out with their families and the social context. But none of them gave up on climbing.

Here are some female Indian climbing champions who love what they do and are spread across India from J&K all the way down to Karnataka.

17-year-old Shivani comes from a humble background of Dharmal, Jammu where she studied at a local government school in Domana. At the beginning of her sports career, she battled against cancer but that didn’t stop her from going after her childhood dream of becoming a professional climber. She received tremendous support from parents, her coach at Shining Star Academy, and the local school principal and staff members. Such a strong support system did wonders for her climbing journey.  IMF nominated her for national competitions and she brought a handful of gold, silver, and bronze medals for the state. Later, she went to Italy, Switzerland, and Slovenia to train for the World Cup and was ranked 7th in the championship. She also participated in Asia Cup, bagged 11th rank in bouldering, and was recognized as a national champion in speed climbing. This is no small feat for a young girl from Jammu who battled cancer.

Shivpreet won her first national bronze medal at the age of 11. Since then, it’s been seven years of hardcore climbing that got her 37 medals in total. That’s not bad for someone whose hometown lacks the ecosystem for climbing. Shivpreet, however, was smart enough to turn challenge into opportunity, and began traveling alone to Delhi for training on a regular basis. Her gratitude goes out to Adarsh Singh, a fellow climber, who inspires her with his humility and incredible support. In this journey, Shivpreet has been a national speed climbing champion for the last three years, and has participated in Asian Youth Championship, Asian Cup, and Asian Games. In 2014, she broke her wrist but that didn’t stop her from getting back on the wall a year later. She has been determined and perseverant in this ride, and it shows.

For Vrinda, climbing is a way of life. She definitely didn’t have the easiest time as someone who has to fight the idea of body image, having felt overweight as a child. Vrinda picked up climbing and realized how it positively changed her perception, even though it was hard initially. Vrinda, now 28 years old, has been climbing for seven years and has experienced rocks in Leh and Karnataka in India and also those in foreign lands including Italy, Germany, Greece, Thailand, Bulgaria, and South Africa. For her, climbing is about overcoming challenges, big or small. It is also a way to meet people who climb just for the love of it. It inspired her to start Boulder Box, a bouldering centre in New Delhi, which promotes the idea of movement in climbing, irrespective of gender, age, or physical ability. India definitely needs a stronger ecosystem with accessible avenues, and Vrinda is on her way to make that real.

Shreya was 13 when she bagged one of the four medals won at the Asian Youth Championship. She is 16 years old now, and for her, five years of climbing has been a significantly fulfilling journey. When she won a silver medal at the age of 11, she knew that she wanted to continue the sport. A permanent member of the Indian Sports Climbing Team, Shreya spends her day studying and climbing to make sure she doesn’t compromise one or the other. Moreover, everyone is happy so she can continue climbing without any complaints from others. Her stringent routine paid off and in 2016, IMF awarded her as the Best Female Athlete of the Year. With gold and silver and bronze medals at several Zonal, National, and International competitions, Shreya is certain to make climbing an important part of her future.

Sneha wanted to spend her evenings after work in the climbing gym, but her parents wanted her to get married.

Sneha started climbing for fitness at the age of 26. Usually, for an Indian girl, that’s the age to get “settled.” Her parents initially discouraged her from pursuing this sport and considered it dangerous. They thought it was time for her to get married. Sneha, however, wanted to spend her evenings after work in the climbing gym. She finally chose the sport and has been climbing for four years now. Ranjit Shinde, a national champion, recognized her efforts and supported her to take it seriously. Then she won 3rd rank in Zonal Bouldering Competition (West Zone) and 6th rank in IMF’s National Sport Climbing Championship Competition in Bangalore in 2016. Finally, it didn’t turn out to be such a bad choice for Sneha. She loves the outdoors and enjoys boulders in Hampi, Badami and Manali. After years of practice, she has rough hands, callused fingers, big muscles, and bunion toes, but none of that matters because climbing makes her happy. When marriage does happen for her, it’s anyway a great way for Sneha to see if her partner is a good fit!

“She is a girl, why would you let her go climbing and travel alone?”

When Siddhi went climbing, neighbors would discourage her mother from sending her alone. “She is a girl, why would you let her go climbing and travel alone?” they would say. But Siddhi’s mother didn’t care for that, and simply supported her throughout her climbing career. Initially, Siddhi had to explain climbing to others, given the lack of awareness. But as she continued to excel in the sport, people’s interest grew as they gained more knowledge about climbing. She began in 2010, and this 22-year old has already played a total of 16 Zonal and National championships, along with 6 International championships including 2 World Cups. In 2017, she was included in the world ranking and will participate in Asian Games in 2018 and the Olympics in 2020. Siddhi is a girl climber and totally okay to travel the world!

Prateeksha began training a lot harder after competing in World Cup 2017. She saw how a team of national champions was nowhere close to the standards of competitors from other countries in the championship. She feels that India has great climbers but they are forced to cope with poor infrastructure. But it also means that they have to keep trying harder to set new standards and transform culture. Her mom’s go-getter attitude means a lot to Prateeksha and she feels fortunate to have parents who support her choices. Many of her friends’ parents do not encourage their children to pursue climbing as a serious option. May be the kids should take out their parents for climbing, just so they can experience how much fun it can be. Prateeksha’s father is a climber too, and that surely worked out well for her. She is 19 and has been climbing for ten years. She has won several national medals and is currently the National Champion in Bouldering. Soon, she will be on her way to Austria to compete in the World Championship in September.

Many thanks to Inspire Crew for introductions to these amazing female Indian climbers! Inspire Crew is an evolving platform for women in extreme and adventure sports in India.