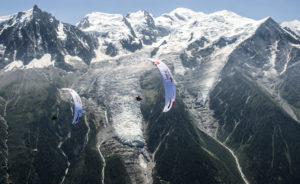 Faster Than Ever: Meet the X-Alps 2017 Athletes

The toughest adventure race on the planet is set to be even tougher—strong winds already forcing the cancellation of flying for the start of the Leatherman Prologue.

With a route change making the course the longest and most demanding yet, the strategic possibilities have been upped for both newcomers and seasoned pros alike. Here is a video intro to the 31 athletes who’ll be heading out July 2nd on this gruelling 1,138km hiking and paragliding race.

Even with no flying allowed due to harsh and unsafe winds, the start of the 8th edition of the Red Bull X-Alps has officially begun! Although Aaron Durogati and Sebastian Huber crossed the finish line of the Leatherman Prologue in just under two hours, showing us all they will be athletes to watch, with this year’s new route, it’s anyone’s game!

Needless to say, the competition is fiercer than ever this year. This has required the athletes and their relied on teams to make their training more intense and we-rounded than earlier races.

Even with many other projects going on (including plans to sail around the world right after crossing the X-Alps finish line), return competitor Tom de Dorlodot revolves much of his year and training around this race. He told The Outdoor Journal in an interview that  “The X-Alps is a very important competition for me. Even with everything else I have been working on this year, I wanted, needed to focus on that.” He’s seen how the race has evolved first-hand and even tells stories of him being able to go grocery shopping or “refuel” on fast-food in earlier years.

“Today you have to be a ‘complete’ pilot,” David Dagault, who came second in the first ever Red Bull X-Alps in 2003 told Red Bull X-Alps reporters. “You need the speed of a top PWC pilot, the technique of a top acro pilot, the sense of the air of a big mountains xc gun. You need to be technically 100% perfect. It means you need to be able to fly your wing at 100%, any conditions, anywhere.”

“But we see people who are also top ultra runners and adventurers,” says Tom Payne, who’s been both competitor and supporter. “In the early days, athletes were good in one area—a good pilot, mountaineer or runner. Now people excel in all these areas.”

The Route
The hardest and longest in the history of Red Bull X-Alps! Here is an outline of the race as detailed by Race Director Christoph Weber in a press release.

The race starts at the historic Mozartplatz in Salzburg, Austria. From there, the athletes will run through the city and up the Gaisberg to Turnpoint 1 where they set up their paragliders and embark on their first flight of the contest.

A grueling 157km straight-line journey south through Austria will take them to Turnpoint 2, the Mangart paragliding launch pad on the edge of Triglav National Park in Slovenia. Triglav is the first Slovenian turnpoint to appear in Red Bull X-Alps and is the country’s highest mountain at 2,864m above sea level.

Traveling northwest from Slovenia, the competitors will arrive at Turnpoint 3; Aschau-Chiemsee in Germany. Located at the foot of the Kampenwand in the picturesque municipality of Aschau im Chiemgau, the athletes will decide whether to continue west on foot, or climb upwards and take to the air.

Turnpoint 4 is the second Austrian turnpoint in the race and can be found in the village of Lermoos. Situated in the shadow of the Zugspitze, the almost 3000m mountain connects Austria to Germany and offers the athletes huge flying potential.

Pushing back south through the Alps to Italy, the athletes will find themselves at Turnpoint 5, nestled closely to Lake Garda by Monte Baldo. At this point, the competitors will have successfully passed the halfway mark; but with tired feet, aching muscles and 499km still to go, anything could happen.

Turnpoint 6 lies 251km west at the Matterhorn in southern Switzerland, making it the longest stretch between two consecutive turnpoints in the race. If getting there isn’t hard enough, navigating around one of the highest summits in Europe certainly will be.

In a final push, the hungry competitors will hike and fly the remaining 246km to reach Turnpoint 7 in Peille, southeast France.

Finally, the timer will stop, leaving the athletes to make the 2km victory flight over Monaco to a landing float in the Mediterranean Sea. Here, they will touch down in style and celebrate the accomplishment and relief of the end.

Curious to see if 4-time reigning champion, Christian Maurer, will be able to hold onto his title—or break yet another record, we’ll be following the racers along—and you should too! Live Tracking available this year.