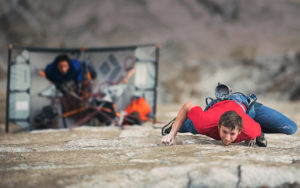 Interview with Tommy Caldwell About New Memoir, ‘The Push’

Now he’s adding best-selling author to the list. One of the preeminent all-around climbers of his generation, Tommy Caldwell spoke with The Outdoor Journal about his new memoir The Push.

After making the first free ascent of the Dawn Wall along with Kevin Jorgeson in January 2015, Tommy Caldwell became a household name. He became one of the very few climbers—along with the likes of Alex Honnold and Adam Ondra—to eclipse the ceiling that usually exists for climbing fame. Caldwell’s and Jorgenson’s vertical life on the Dawn Wall enthralled Americans and the world at large, and they received coverage in mainstream media outlets like The New York Times. (Adam Ondra made the second free ascent of the Dawn Wall in November 2016.)

When he came down from the climb, Tommy Caldwell started writing. He had authored a healthy number of articles over the years, shorter pieces for the likes of Rock and Ice and other climbing magazines. But now he was going to try his hand at a much larger piece. If the Dawn Wall marked the culmination of a life’s worth of climbing skills, The Push—the memoir that Tommy Caldwell spent the next two year torturously producing—is a culmination of Caldwell’s broader life experiences, relationships, tragedies, heartbreak, obsessions and unparalleled success.

Nothing is too personal for the Coloradoan in his new book. It spans his childhood, when he embarked on mountain adventures with his body-builder father; it covers his teen years as a competition climber; it addresses with new emotional depth and introspection the climbing trip to Kyrgyzstan in which Tommy Caldwell and climbing partners (including his future first wife, Beth Rodden) were kidnapped by militants and escaped only after Caldwell pushed one of their abductors over a cliff; it deal with his successes in Yosemite and Patagonia; and, of course, it covers his obsession with the Dawn Wall.

So how does it feel now that the book is finally out? A bit surreal?

Yea it’s unnerving, honestly. I kept the book in my inner circle while I was writing it. I was like, ‘If I want to write a good book, it has got to be as personal as possible, and I have to go as deep as I can.’ I tried not to think of what other people would think about it. But now that it’s coming out, I have to think about it! The good news is I feel like most people are appreciating the honesty behind it. So that’s pretty exciting.

What was the writing process like? Approaching something like this has got to be a bit intimidating, right?

I’d written articles, but never a book. I was basically a high school dropout. Never formally trained as a writer. But I’ve kind of made this life of looking up at these big scary objectives, starting up, and just seeing where they took me. So I guess I just did my best.

As a professional climber, your life naturally has these flashbulb events around big trips and climbs: Kyrgyzstan, various free routes on El Cap, the Fitz Traverse, the Dawn Wall. But your story has just as many major non-climbing events: your kidnapping, cutting off your finger, getting divorced from Beth Rodden, finding love again. How did you balance these while writing the book?

I wanted this book to transcend the climbing world. Having an article that is very climbing-centric works well on its own or in a magazine. But having a whole memoir about climbing—I think it would get a bit repetitive.

The things I was most moved to write about were the most personal things. A bunch of the early reviews say something to the effect of, ‘This is a book about climbing… kind of.’ But I’m super excited to hear that, because its not really about climbing.

I wanted to touch people on a deeper level. And I wrote the way I did because I needed to digest all those experiences. Climbing victories are relatively easy to digest, but things like getting kidnapped in Kyrgyzstan are much harder to work through. Writing it was kind of this cathartic self-therapy in a way.

You’ve had years to process certain things, but in writing this book, going through that “cathartic self-therapy” that you describe, did you find yourself reexamining some of those past events and understanding them in new ways?

Yea, absolutely. As adventure climbers, we tend to focus very intensely on the things that are going to help us accomplish what we want to get done, and then we purposely block other things out that detract from that. So you have to be able to focus pretty singularly. Writing, for me, was the exact opposite of that. I had to try to see everything all at once. It was a big challenge. I saw some things from different angles.

I was kind of surprised at how heavy the book turned out. I set out to write a classic adventure story, but what emerged was much deeper and more serious. People who know me probably see me as an optimistic, easy-going guy, so they were maybe surprised by what they found in the book.

Writing it was a really interesting thought-experiment for me. I feel like I’m a much deeper thinker now.

What was the hardest part of the book to write?

There were parts that were super emotional. I’d cry while writing, or get giddy. Other parts were super slow and painful to write. It was a very laborious process for me. 30-40 hours a week for a year. I worked really hard.

Can you talk a little bit more specifically about the title? It refers to the final push on the Dawn Wall, but it’s more than that.

Yea. The title of the book is a common thread throughout my life. I was pushed quite hard as a child; I pushed myself as a teenager; I pushed one of our kidnappers off the cliff in Kyrgyzstan; and yea, the push itself on the Dawn Wall.

But you know, I didn’t write about the Dawn Wall first, even though I started writing pretty soon after finishing it. I went straight to writing about Kyrgyzstan when I started. Wrote about the moment of pushing the guy off the cliff, a moment that changed my life, when I thought I had killed a man. Those were the first words I wrote. I thought I wanted to write a book before that, but after writing those words, I knew I had to write it. I needed to see my life through this new lens.

Now that the book is done, what’s next? Any big climbing projects in the works?

Not really. I get incredibly, intensely obsessed by things. And for the health of my family, I think I need to take a break from that. But there are so many ideas out there. I tend to latch on to things as soon as there’s space in life. There’s a linkup in Rocky Mountain National Park that I want to do. I’ll be in Yosemite for a month later this year and there are more El Cap routes i want to look at. I’d love to go to Baffin Island maybe, and other places with big El Cap-type walls that are more remote.

I’ve just got to find things with a reasonable level of risk. Pretty important for me right now. My instinct when things get really dicey is to kind of shrug it off, and that’s what scares me: I’m not overly cautious in the moment.

To learn more about Tommy Caldwell and The Push or to purchase a copy, visit http://www.tommycaldwell.com.