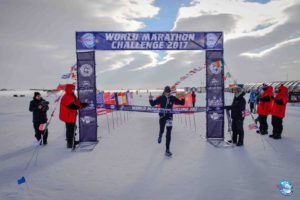 Running 7 Marathons in 7 Days on 7 Continents

Michael Wardian ran 7 marathons in 7 consecutive days on 7 continents—all in under 3 hours each at World Marathon Challenge.

This is his record breaking story.

Michael Wardian is an American ultra-marathoner who has won US 50km championships in 2008, 2009 and 2010 and won US National 100 championship in 2008. Other ultra-marathons he has finished are Vermont 100 Mile Endurance Run, Western States, Marathon de Sables, and the Himalayan 100 Mile Stage Race. In 2008 and 2009, he was named ultra runner of the year by the US Track and Field Association.

We got in touch with Michael after World Marathon Challenge and he was “super pumped” for the interview.

How long have you been training for the World Marathon Challenge?

Michael: I have been training for the World Marathon Challenge for many years, I would say. I race a lot and do tons of back-to-back events, so I felt suited for this type of an event. This specific training involved a lot of running at all times of day.  I was running between 80-120 miles per week, making sure I got lots of runs at all times of the day so that I was ready for the different time zones, etc…

What challenges did you face during and between the races in terms of jet lag, fatigue, etc.?

Michael: I think we all had a lot of challenges during the events and I definitely suffered from lack of sleep. I usually don’t sleep a lot but with the travel and circumstances, I was averaging about 2-3 hours of sleep between events. Before the marathon in Dubai, I hadn’t slept in over 30 hours. I am also almost vegan (I eat eggs and honey), so finding foods was a bit tough but I managed. I also just had general fatigue from running so many miles but all in all, my body was incredible and allowed me to really push myself each and every day.

What were the challenges each location gave during the race?

Chile had wind and rain and it was a bit cold, so we had to dress for that and deal with it during the race.

In Miami, we experienced heat and a crowded course so we needed to navigate those to be successful.

In Madrid, we had colder weather and a course with a little climb on it, so that brought challenges as well.

Marrakech was incredible. We saw the city come to life but it was also very hot and the course was around a park which meant we were in the city and had to deal with fumes from cars, trucks and camels.

Dubai was the hottest marathon we ran and the course was right along the ocean, so we had a strong headwind along the course and also a lot of heat without any shade where we all suffered.

Sydney, Australia was incredible as well. We ran at 1:00am, so we were about the only people at Manly beach but the weather was very hot and humid and we had a long flight before the race.  We were fatigued, but it was terrific.

What was your nutrition and recovery strategy?

My recovery strategy was to keep moving, get on my Addaday foam roller, stretch and massage. I also like to hydrate with as much water/fluids as possible.

What’s that one thing you learned from this race that’ll help you in your upcoming endeavours?

Check our his upcoming races at www.mikewardian.com/schedule