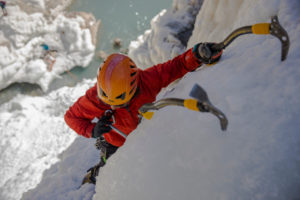 For five years, Prerna Dangi perfected her climbing, whilst dealing with frequent issues of body image and gender bias in India.

India has witnessed the rise of female mountaineers like Bachendari Pal and Santosh Yadav, who paved the way for younger adventurers to keep trying. Prerna Dangi had the courage to choose a similar path. With resilience and self-motivation, this Indian climber was inspired by supportive parents and close friends, to top one of the hardest ice-routes in the country.

Climbing is changing my body. Do I want that? It made me question. I later realized that I just want to be a climber.

When Prerna arrived at the Indian Mountaineering Foundation (IMF), she was excited to meet her fellow climbers. This was her first climbing endeavor with a wider group and a better wall, having initially discovered the sport in St. Stephens College, Delhi. During that period, whilst climbing a giant wall in front of people assessing her skills, something strange happened. Guys noticed her big arms, and made sure to point it out. She had hoped to get some feedback on her climbing technique.

That event, however, was a turning point for Prerna. “Climbing is changing my body – do I want that? It made me question it. But I later realized that I just want to be a climber,” says Prerna. She is one of the relatively few, fully dedicated recreational female climbers in India. She is 25 years old and has a significant number of climbing and mountaineering adventures to count among her experiences.

One of the recent ones was in January 2018 when she climbed the 350 ft high frozen Dankar Monastery Fall in Kaza, Spiti. During her adventure, she was accompanied by Project Wild Women. This was the product of preparation that included some nine frozen waterfalls from WI Grade 4-7.

That’s the achievement, but what about the journey, and what did it take to get there?

Struggle is at the core of climbing, and has also been a part of Prerna’s social context. She recalls an ice-climbing experience in Manali before gaining recognition for Dankar Monastary Fall. There were 15-20 climbers competing in the festival, organised by a local production house. There were almost nine climbers and only three participants had tried ice-climbing before.

Prerna was one of the two girls in the group, and didn’t have a climbing partner to belay her. When everyone tried and failed, she was the last one left. “No one asked me if I wanted to do it,” she remembered. “I was a new person in their community. I felt that the rest of the team was oblivious to giving someone new an opportunity. I found someone to belay me, and went to reach the highest point on the icefall.”

In other instances, Prerna realised that everyone is not the same. In 2015, Prerna headed out with two fellow climbers, Bharath and Karan, who discovered the Shilla Nallah ice route in Spiti. The three climbers courageously experienced the bad weather together, including a small avalanche, while trying to climb the fall. “They saw me as a climber, and put trust in me. My performance improved. They didn’t confuse ability with gender.” Later, she even found a fellow female climber, Vrinda Bhageria. They go on climbing adventures whenever they get a chance.

A strong and supportive ecosystem can make a huge difference. Prerna had to be patient to find the right people who supported and motivated her. Until then, she resorted to a change in attitude. “Earlier, when I climbed with people and noticed that they are not nice people, I wouldn’t be as motivated and see myself withdrawing from giving my all,” she remarks. “There were more people to pull me down than to support me, even if just for fun. They would tell me that for a girl, I climb so well. I was really bothered by this.  But now, I am able to see the good in people, learn from them and move on. I don’t let the badness get to me.”

“As a woman, I’ve had to prove myself before being accepted as a competent climber.”

“I want to become an internationally certified rock and ice guide. This will allow me to increase the scope of this field, provide an outlet to more people to push themselves in the outdoors. It is also the only way I feel I can inspire some sort of a change in my surroundings.”

No matter how the outer world was, Prerna’s family consistently encouraged her throughout this crazy ascent to freedom. Not only did they support her, but also exposed her to the initial playground in rural India.

Prerna’s dad hails from Tikhunkot village in Uttarakand. One needs to hike to get to this isolated village in the mountains. Her family lives in Delhi, but for almost 10 years, they would visit the village for a couple of months every year. That’s where Prerna learnt the value of simplicity and nature, but most importantly, the joy of climbing.

“I’ve been climbing trees since I was very young. I don’t remember being scared of heights and falling,” she laughs.

“When I first climbed a big mountain, I felt humbled.”

As she grew older, Prerna discovered her deep interest in varied sports, but was smart enough to realize the importance of good academic grades to keep everyone happy. So she studied hard and played harder. It worked. When teachers at school suggested to her parents that she should reduce play time, they just responded, “but she has got good grades anyway.”

Years later, thanks to family and her deep inclination towards adventure sports, Prerna ended up climbing 10 frozen waterfalls and the highest mountain in North America as part of a two-women team without a guide. Additionally, she has attempted the routes of East Tosh Glacier (6,450mts) and T 16 Virgin Peak Expedition (5,800 mts).

“Climbing is the only thing where I push myself all the way, and I won’t give up until I fall. You will fall whether you reach the top or not.”

With that attitude, her achievements as a climber are no surprise.

Prerna feels optimistic about the future of climbing in the country. “India is going to be the ultimate climbing playground,” she says. “We have everything from trad and sport to boulder and alpine in the coming years. We have so much untouched, unexplored territory waiting to be discovered and cultivated.”

Until more adventures, here is to never giving up.

Keep reading more about female Indian adventurers, such as Malavath Poorna, the youngest person ever to summit Everest.