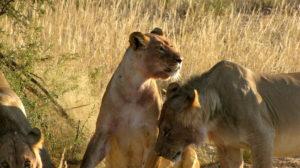 Safariosophy: How to Tackle a Lion Charge Over a Cup of Coffee

An experienced safari guide based in South Africa's Hluhluwe-Imfolozi game reserve is chased by a lion while on a safari with five guests.

Safariosophy is her philosophy on safari. Read on to know what happens next.

“Let’s go see those lions again,” I offered with a smile. Coffee cups in hand, we strolled back over to the viewpoint. But the lions had vanished from the riverbed.

Just a few minutes earlier, my five safari guests and I had been sipping coffee and watching our local pride of seven lions resting next to one of Hluhluwe-Imfolozi Game Reserve’s last patches of seasonal water, far below our vantage point. But the lure of more coffee was enough to compel some of our party to abandon the spectacle. I could hardly blame them. The lions were no more than tan-colored specks in the distance. In all honesty, I’m not even sure that all of my guests could make them out as lions. That happens. In tricky sightings, I’ll ask if someone can see the leopard clearly and they’ll almost always say ‘yes,’ even if it’s obvious that they cant, or they’re looking through the wrong end of their binoculars. This lion sighting was a little like that.

“They’ve gone,” a local tourist told us as he made his way back to his car. “Off into those tress,” gesturing at the thick forest on the other side of the riverbed.

“Oh well, we got to see them nicely,” I said with a shrug of my shoulders. I took a few steps closer to the edge to have one last scan for any trace of lion. And then everything happened all at once.

Screaming. I turn and look at my guests. They’re running away. A coffee cup hits the ground. A hat flies. I see a flash of tawny fur and for some reason, my mind says ‘baboon.’

My mind doesn’t stop as dust showers my leg. The baboon is running straight for me. Does it want my coffee? This is a new coffee mug, there’s no way. It can’t have my coffee mug! It’s growling at me.

Because it’s a lion.

I’m being charged by a lion.

Instinctively I turn my body to run, when muscle memory kicks in. I can’t run from a lion. Food runs from lions.

“STOP RUNNING!” I shout at my guests, as I chamber a round in my rifle. Except I’m not holding a rifle. I’m holding a coffee cup, albeit a very nice one. With a lion snarling at my feet.

My world is a mess of dust and fur and nerve-shattering growls, but I know I  need to be still. Her eyes bore through mine. Trust the situation. Trust her. Where did she come from? Are there others? Has she got cubs nearby? Is that why this is happening?

My guests are still running.

When I say those things happened all at once, I really mean it. The thoughts all came in a nanosecond. I suppose that’s what everyone means when they talk about how a lion charge gives you ‘tunnel-vision.’

If I can say that that happened in a nanosecond, it’s surely permissible to say that what followed took forever. We weren’t done yet.

I showed the lion my hands and took the first step back. Then another. I kept my hands in the air, as if it would do something. Isn’t it supposed to? We’re meant to make ourselves bigger when a predator takes us on. It’s not the easiest thing to do. Trust me.

“STOP RUNNING!” I scream again. It didn’t matter this time because my guests had never stopped running and were already watching events from the relative safety of the car.

An eternity later, I stand dumbfounded at the door. The lion has followed me but she’s now ten meters away, with her head poking curiously from behind a bush.

“GO GO GO!” My guests are shouting at me.

Calmly, I tell them that we’re safe now.

I survey the scene. Lion. Between us and her, are a coffee cup and a rather nice hat. My coffee setup is still on the truck’s tailgate. With both eyes on the lion, I climb down and quickly pack away our coffee and snacks. We’d have to sacrifice the hat and wayward cup. The guests protested throughout.

In that moment, their safari was over.

“Are you sure?” I asked for the second time that morning. After all, I was leaving what was now a great lion sighting. Hadn’t they wanted to see lions closer?

At that point, we were more than an hour away from the lodge. I used the long drive to debrief the guests and try and make light of what was actually a pretty traumatizing event. It worked. By the time we got back to the lodge, we all had a huge new repertoire of inside jokes and anecdotes.

Days later, I had coffee again (different guests) at the same spot. I could still see the lion’s skid tracks, where she’d stopped just short of me. What I’d estimated as two meters on the day, was actually even closer. After visiting that viewpoint so many times in the past, the whole place looked oddly different with this new memory strewn across it.

Lots of lessons were learned that Sunday. I’ll be less complacent at drinks stops in the future, for one. But I do love how all of those simulated lion charges that we have to practice before we can walk in the bush, really paid off. My muscle memory kicked in when I needed it. What scared me, was the lion charge itself. It had happened from such close quarters, with absolutely no warning. She also charged from down a steep hill, up towards us, which isn’t ‘typical’ either. Nor did she turn and flee when it was all over. It just goes to show that anything can happen out here in wildest Africa. But hey, we’re all still here and I think I’m a better safari guide for it.

Hoofnote: Do you know what a ‘nanosecond is?’ A nanosecond is to a second, what a second is to 32 YEARS. All that stuff that took place in a single moment, actually happened over billions of nanoseconds.

How to Handle a Lion Charge
As hard as it is, you need to stand your ground in a lion charge. If you turn your back and run you can stimulate a chase. A lion charges at 80km per hour and you can’t outrun it anyway. The best you can hope for is to intimidate it by standing still and shouting and making yourself look big. Most of the time they’re more scared of you (during the day at least!)

Safariosophy is Anna Tinker’s exploratory take on the subject of Safari. Read her blog on www.safariosophy.com