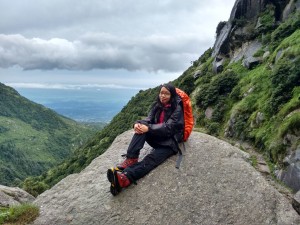 Eirliani Abdul Rahman quit the Singapore Foreign Service after ten years of service, set up her non-profit on child rights and child protection, and decided to gain media attention on the subject by attempting to be the first woman from her country to walk to the South Pole.

Here, she tells her story in her own words.

I was ten years old when I read about Captain Robert Falcon Scott and the ill-fated Terra Nova expedition to the South Pole in 1912. My young mind was especially struck by Captain Titus Oates walking out into the blizzard on 17th March: “I am just going outside and may be some time.”

It was the last that his teammates saw of him.

My classroom had a tiny little library at the back – no more than several book shelves – and I had finished my class assignment early. Sitting there, with the dog-eared book in my hand, I was in shock: “What would compel a man to walk out into a blizzard and leave his companions behind?” What brave self-sacrifice, I thought.

I face these questions now: “Why do you want to go to the South Pole? What do you hope to achieve?”

Growing up, I was not much of an athlete. I was more comfortable playing chess or designing an algorithm for a micro mouse to negotiate a maze: the quintessential geek. I used to compete in long-distance races, but that was it. I was happier with my books. A book and an apple, and I was the happiest child in the world.

But that story of Captain Scott and Captain Oates must have sat there at the back of my mind all these years.

When I decided to quit the Singapore Foreign Service in December 2015 after ten years of service, I thought: how could I best raise the issues of child rights and child protection, and raise the profile of children who have been abused? Two days short of Christmas, I incorporated my own non-profit YAKIN (Youths, Adult survivors & Kin In Need) with Prof Daniel Fung, Chairman, Medical Board of the Singapore Institute of Mental Health as my co-director.

Why not become the first woman from Singapore to reach the South Pole? Get media attention and use that opportunity to raise the issues that are close to my heart.

And so the training began. I would mumble to Ruta Siddlauskaite, my climbing partner from Lithuania and who is also accompanying me on this expedition to the South Pole: “This is hard!”

We were often the only women in the class as we did a punishing circuit, to train our core and strengthen our leg muscles. We would work on our upper body too. We work out five times a week, and also help out at the gym “Delhi Rock” where we train on top of our day jobs.

But we believe that ordinary women can do extraordinary things if we put our mind to it. And that is another message that we hope to convey.

But essentially, it is the simple message of hope. That child abuse can be prevented and that we all have a role to play. And that deep within us, there lies a reservoir of strength and resilience.

There is a Captain Scott in all of us.