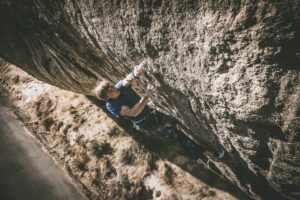 When he sent Estado Critico in Siurana, Spain in 2013, Alex Megos became the first climber to ever onsight a 9a (5.14d) route

Since then only Czech crusher Adam Ondra has managed the feat. Now, four years after Estado Critico, Megos has done it again.

Alexander Megos took the climbing world by storm in 2013 when he onsight Estado Critico (9a/5.14d) in Siurana, Spain. Prior to his ascent, the hardest onsight ever was two grades easier. Since then, the 23-year-old German has firmly established himself as one of the strongest climbers around, bagging ascents of the hardest routes faster than most thought possible.

On May 21, Megos collected his second ever 9a onsight when he sent TCT, a route in Gravere, Italy. Of note, the route was previously onsighted by Adam Ondra, making it the first 9a to ever see multiple onsights. Megos’ day started with few expectations. “It was actually kind of an accident that we ended up at Gravere,” Megos told The Outdoor Journal in a phone call. “The evening before, my friend’s car broke down, so we realized if we wanted to go climbing we’d just have to join some of his friends wherever else they were going. Gravere it was.” Upon learning that the crag had a 9a, and that Ondra had onsighted it, Megos decided he would try as well.

From there, Megos’ expectations sank lower. “We got to the crag, warmed up, and I felt absolutely shitty,” he said. After two warm-up climbs—a 6c (5.11b) on which he got “totally pumped” and an 8a+ (5.13c) that “didn’t feel great”—he thought about saving the 9a for another day so he could give it a proper onsight burn.

But his friends bombarded him with the same encouragement and advice that Megos said he frequently gives to them: “‘Who the fuck cares,’ they told me. ‘Just give it a try. It doesn’t matter if you do it or not. Just have fun.’” With that in mind, he tied in and started up the route.

Megos said the route is broken down into two distinct parts. “The first part is an 8c (5.14b) and quite sustained for about 15 meters. No rests, no shakeouts. From there, you go directly into the crux of an 8b+ (5.14a)—an eight meter shield, 45-degrees overhanging, with small crimps and really big moves.

Asked about what was going through his mind while climbing TCT, Megos said he couldn’t recall. “You’re so focused on the climbing you can’t even hear people talking. You’re just focused on the moves.”

At the top of the final 45-degree overhang, Megos found himself even with the anchors, which were a full meter to his right.  “So I was hanging out at the lip with the anchor right there, unable to clip it for two minutes. That’s when you’re like, ‘If I don’t seriously mess it up right now, I’m going to do it.’”

And do it he did. Ten minutes after he left the ground, Megos clipped the chains, his second 9a onsight complete.

With two 9a onsights to his name, one fewer than Ondra, the question of if Megos might one day onsight a 9a+ becomes that much less fantastical. “Yesterday I started realizing it is actually possible, you know?” Megos said. “But lots of things have to come together. You have to be strong, fit, have the right mindset, and you have to be willing to try and fail a lot.” And while all that is critical to success, Megos said that with TCT clearing his head and just climbing for climbing’s sake was equally important: “I had no expectations at all of onsighting it. So I was able to climb very free and very relaxed.”

Italian Stefano Ghisolfi made the first ascent of TCT in 2014. (Stefano was not present for Megos’ onsight, but his sister Claudia Ghisolfi happened to be there.) While the climb features a considerable number of chipped and manufactured holds, the route was equipped and altered prior to Ghisolfi’s ascent. The route’s name is an homage to Tito Traversa, an Italian climber who died in 2013 at the age of 12, when lowering from improperly assembled quickdraws.

Megos other career highlights include sends of hard Chris Sharma lines like First Round First Minute (9b/5.15b), in 2015, and Biographie/Realization, the world’s first consensus 9a+ (5.15b) which Megos sent in one day on just his third try in 2014. Megos also made the third ascent of Paul Robinson’s testpiece boulder problem Lucid Dreaming (8C/V15) in 2015. More recently, in 2016, Megos made the first ascent of Fight Club, a route equipped by Sonnie Trotter and Canada’s first 9b (5.15b). Check out the video of this ascent below: