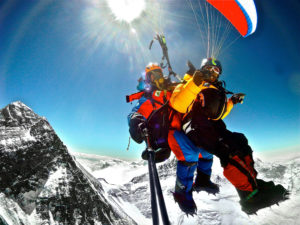 Exclusive: Interview with Lakpa Tsheri Sherpa, of The Ultimate Descent

“People always asked me if I was scared.

If I’m scared, maybe that means I don’t have confidence. And I need confidence for this adventure”. Lakpa Tsheri Sherpa certainly spoke these words like a man who knew what he was talking about. And he should, after all; this is a man who knew a thing or two about confidence.

In 2012, Lakpa and his companion Sano Babu Sunuwar cemented themselves in both Nepalese and expedition history. They stunned the adventure community when they did something no one had ever done before. They climbed Mount Everest, before paragliding from the summit, flying over the Himalayas, landing in Nepal and then kayaking 500km to the mouth of the mighty Ganges River, all the way to the Indian Ocean.

If this adventure wasn’t already epic enough, one of them wasn’t a climber, and the other couldn’t swim. Oh, and they did the whole thing without any sponsors or expedition support. Their exploits were documented in the movie The Ultimate Descent, and once their story caught the attention of the international community, they soon found themselves crowned the the National Geographic Adventurers of the year.

I remember seeing the movie at an adventure evening in London in 2012, and loving the story. Hard to believe that 6 years later, I’d be sitting having a coffee with Lakpa, both with our own Everest tales to tell.

We were sat in a small lakeside cafe in Lakpa’s now hometown of Pokhara, in Eastern Nepal. His status as perhaps the towns most famous name was clear, certainly amongst the locals, with every other person giving him a nod or a welcome embrace. The cafe owner was no different, a big backslap and a grin was served. For my part, a strong and meaningful handshake. It seemed I was in good company.

I had travelled to Pokhara after a chance meeting back in Kathmandu. I had just returned from Mount Everest a broken man, after an unsuccessful attempt to climb the famous peak, and during my recovery in Nepal’s bustling capital city, had met an old friend of Lakpa’s. I had mentioned my interest in the movie, and the adventure behind it. “Lakpa is my friend”, remarked Passang. “Travel to Pokhara, and he will meet you”. I booked my flight that day.

For me, The Ultimate Descent is the epitome of an adventure; doing something new, something a bit crazy; planning it – but not too much. Where did the idea of this ultimate adventure come from?

I’m a climber, my first Everest summit was in 2003. I was standing on the top, and started thinking that it would be amazing to fly from the summit of the mountain. It took me until 2009 to learn to paraglide, it was a British man who taught me actually. I bought a glider from Italy, and took 9 days of lessons, and ended up crashing into a tree! I didn’t have enough experience for high altitude flying, but i met Sunuwar here in Pokhara, and he had the same idea as me, to fly a paraglide from the summit! But he wasn’t a climber, he was a kayaker. We made a plan to use non motorised transport to travel Summit to sea.

By the time of the expedition, i had climbed Everest 3 times, but had actually been on the mountain 11 times, working as a Sherpa, a cameraman, sometimes as crew. But still, I am not a kayaker, Sunuwar is not a mountaineer. In the movie and all of the international media attention that followed, much is made of the fact that you didn’t have permits to climb Everest; you had no commercial expedition, no equipment, and no support. You slept in other teams tents and used their logistical support. What was your reaction to this negativity?

Well, we are explorers, you know? We are doing something original. In 1953 Sir Edmund Hillary summited Everest, did he need a permit, permission? No. A long time ago the Wright brothers made an aeroplane, did they get put in jail? We wanted to show people we could do this. We were the first. Now people try and copy us, but we were the first.

So together, carrying all of your flying gear, you make a successful summit on Everest. How did you manage on the climb, and how the hell did you run off the summit?!

It was very difficult! I promised his wife that i would get him up Everest safely! He had no experience at high altitude, it was not easy. I gave him my oxygen on the summit. We flew off the summit with all of our mountaineering gear, including our crampons, we landed in our expedition suits.

There was no running space, we got lift in the glider and just stepped off! We had a lightweight glider, that would work at high altitude. We saw beneath us all the other climbers. We flew for around 45 minutes, and then we landed in Namche Bazzar. You flew off Everest, landed, while still wearing your high altitude gear, and then entered the kayaking leg of the journey, which was the most dangerous part of the whole adventure right? You even got robbed along the way?

We crossed Grade 5 rapids, big drops, I had no training. And I couldn’t swim! I trusted Sunuwar like he trusted me on Everest. We kayaked non stop for 28 days. We took a little bit of food and supplies with us, but we would take it in turns to find more food, one of us would stay with the kayaks while one went into local villages in secret, so we didn’t draw any attention.

Many people were watching us from the side of the river, always asking us to stop, but we never stopped, we were so tired. One day we had to stop in daylight, we decided to make camp and some men came and told us to leave, so immediately we got back on the water and paddled another 5km down river. We stopped again, and slept for a bit. Suddenly, 10 men arrived, and took everything. They were shouting “where is camera, give us money’. Luckily we had hidden the cameras in the kayak. But they took all of our money and told us they would be coming back again. We quickly got back on the river, but they followed us in a motor boat, but we were faster than them on the shallow sections of the river.

We paddled on until it was dark, and made camp using the moonlight to see. We managed to hide until 5am, they found us again. So we left. They followed us for many days, they were hunting us. We had to pick fruit from the trees to survive.

So you kayak for 28 days, and you end up in the middle of the one of the biggest rivers in the world, The Ganges. Two small kayaks on this huge expanse of water, how intimidating was that?

There were huge ships were on the Ganges, sailing from Calcutta, giant boats. But the locals were only interested in us, always asking us where we got the kayaks from. “You sell us your boats” everyone was asking to buy them from us!

We have a GPS, but we know which way to go, we just follow the river to the Indian Ocean. But for me, it was strange, it was very difficult for me to breath. Just like you at altitude, with breathing problems, i had low altitude sickness. I couldn’t sleep, I was very sick. It was very uncomfortable for me, right until we reached the ocean. We were looking at our altimeters, telling us zero meters, but we still had a long way to paddle!

We reached the ocean, but we had to start thinking about how we got ourselves, and our kayaks, back to Nepal. We are two Nepali guys, and the border guards are asking many questions. It’s hard to explain how we have come all the way from Everest! This expedition was the first time that a truly Nepalese team had done something so ground breaking; it didn’t involve Western climbers or an international team. Do you think this fact has helped to inspire other Nepalese to seek out adventure, to push boundaries?

Many people have now wanted to do something like this, many people have been inspired, we see people bicycling, rock climbing, mountaineering, without the need for international support. It is very positive.

But i’m not finished, I would like to climb another high altitude peak and fly from the summit, a commercial flight. Maybe in the future, I would like to introduce future climbers to the idea also, maybe take some clients with me, give them the opportunity to fly.

The conversation then turns back to Everest; this year there have been a record number of summits, the mountain is more accessible than ever, many of his friends are Everest Sherpas, and Lakpa is happy to see the high level of training, the good quality of gear that ultimately prevent deaths on Everest. He is keen to give me advice, to let me know that my recent attempt on the mountain shouldn’t be seen as success vs failure.

The number of people climbing is not a problem, if things are safe. I would like to climb the mountain again, and you should too. You need to be prepared, mentally and physically. People will always tell you it is impossible, but wait and see, one day these things can happen. One year, you did not make it, next year, you might do. But always think positively.

We finished our lakeside lunch, and it was Lakpa’s turn to ask the questions; “What is your plan for the rest of the day”, “nothing” I replied. “Great”, he said, “then let’s go fly!”

Make sure you read more about Lakpa Tsheri Sherpa’s companion in a previous article, The Flying Prince of the Himalaya, Sano Babu.

You can find your own adventure at outdoorvoyage.com

Marc Lambert is a UK based mountaineer, skydiver and aspiring adventurer with a passion for expeditions and challenges, the more remote the better. Keen photographer and story teller through a lens. Instagram: atlas_diaries