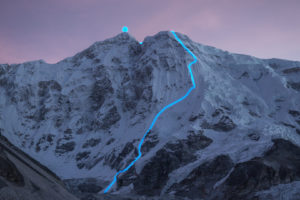 Mountaineering lore is populated with names like Reinhold Messner, Ueli Steck and Jeff Lowe―climbers who elevated style (the means) above the goal (the summit)―and at just 25 years old, Kobusch is intent on living that legacy.

In 2015, Jost Kobusch was in Nepal to climb Lhotse. Like many other climbers in the Everest region, he witnessed the avalanche that killed 22 people. It was the closest call he’s ever had in the mountains, and it changed his outlook on life.

But perhaps not in the expected way: rather than thank his lucky stars and vow to take fewer risks in the mountains, Kobusch says, “I realized everything after that was a bonus, I was lucky to be alive. So I decided I would do what I wanted, and just climb. I decided to commit myself 100% to becoming a professional climber.”

Two years on, Kobusch has done just that. On October 3, he made the first ascent, solo, of Nangpai Gosum II, which, at 7,296 meters, was the fourth tallest unclimbed mountain in the world, and a major prize in the Himalaya.

The mountain had been attempted four times prior, most recently twice in two consecutive years by the same team of French mountain guides. The French were gracious enough to help Kobusch with the information they had about Nangpai Gosum II, including pictures, route descriptions and learnings from their failures. Kobusch decided he would try to finish the route the French had begun; though not the easiest line up the mountain, it was one of the proudest.

Kobusch climbed solo, but not-free solo. He fixed ropes and used protection when necessary. “The French Route was pretty technical,” he says. “And the conditions were terrible. The problem is that it’s a south face. Intense sun melts everything quickly, so there’s really bad and scary rock fall. Literally just a rock shower.”

On one of his forays up the route, he was climbing an especially dry spot, with little ice in which to place protection. “I built up a belay with an ice screw and an ice axe, and started hammering in a piton. Suddenly everything ripped out and I was hanging by the half-hammered in piton. The sun had melted my ice axe and screw out in only 20 minutes. Not so cool…”

Kobusch retreated back to the ground. “I realized this route was not going to work,” he says. He turned his sights to an easier, but equally beautiful part of the mountain, and began planning.

Despite his relative obscurity, Kobusch has been working up to a coming-out achievement like Nangpai Gosum II for a long time. At just 25 year-old, the young German already has a bevy of impressive alpine-style, solo ascents to his name. His climbs demonstrate a reverence for the ethos of light-and-fast alpinism and the stylistic sensibilities of giants like Ueli Steck and Reinhold Messner.

On a trip to Kenya at 19 years old, Kobusch organized his first minimalist expedition, hiring just a porter and cook, and climbed Mount Kenya―Africa’s second highest peak―solo. “That was the beginning of my soloing,” he says. “I realized, going by myself, that I didn’t need someone who had the same target, skills or budget. I could do it all by myself.” His next big step was climbing Mont Blanc in winter conditions―again solo.

In 2013, eager for more of the solemnity and self-reliance intrinsic to soloing, Kobusch lit out for Kyrgyzstan, where he had his first major humbling in the mountains: “I tried to solo Pik Lenin [7,134 m] in wintertime. It didn’t work out, I almost died a couple of times,” notably when his tent’s snow anchor ripped out and he found himself sliding slowly toward a crevasse.

The do-or-die attitude that Kobusch cultivated up to that point needed some refinement. He says, “You learn from these mistakes a lot, and they kind of let you grow faster. I also did an unclimbed 4,000 meter peak in Kyrgyzstan, which was the beginning of my passion for first ascents, the need to touch the untouched and explore a bit more.” The year after Kyrgyzstan, he visited the Himalayas for the first time and climbed Ama Dablam. His was the first ascent of the year, and he free soloed the route, shunning the unsafe fixed ropes from the previous season.

When he returned to the Himalayas in 2015, the Everest avalanche derailed his Lhotse plans. Deciding to dedicate his life to the mountains going forward was only one of his takeaways, though. He found the crowds at Lhotse a major turn off, and determined to avoid them as much as possible in the future.

So with those two pseudo-epiphanies about what he wanted to do and how, Kobusch traveled to Annapurna in 2016. “It’s one of the rarest climbed 8,000 meter peaks and it’s also one of the most dangerous ones,” he says. He soloed Annapurna.

“I still wanted to go more pure, though. I figured a project like Nangpai Gosum II would be the perfect place to do a very pure solo far away from everybody.”

Korbusch’s new strategy was to climb a steep couloir on the right side of Nangpai Gosum II’s South face, traverse to a prominent spine on the right side, ascend to the ridge of the first false summit, and then continue towards the top. He would climb it in as pure a style as possible: “I went minimalist: no ropes, no ice screws, nothing. I just took my harness and one carabiner in case of a helicopter rescue.”

He started from Advanced Base Camp (5,600 meters) at 3:00 am. The nighttime temperatures kept the snow firm and consolidated, and mitigated avalanche risk. Kobsuch reached Camp 1 (approximately 6,440 meters) at 4:00 pm, chopped out a one-meter-wide platform for his sleeping pad, and laid down to rest.

The second day he ascended to 6,840 meters. “It was an easy day. It was going good. I was there before sunset,” he says. After a few of hours of sleep, he roused at 10:00 pm, and started his summit push. Catching the sunrise from the first false summit, Kobusch drank in the curve of the earth as he sat above the clouds and gazed towards Everest, steeling himself for the final summit-ridge slog.

He postholed through deep powder for the final 800 meters, pausing every ten steps to catch his breath. Finally, he made the top. He took in the views, enjoyed the moment, gathered his strength, put up some prayer flags, and turned right back around. By the middle of the next day he was back in Base Camp.

Kobusch is extremely happy with his new route up the no-longer virgin peak. “It was beautiful and also felt like I was really exploring. I had no information. I was just reading the terrain and going where I thought would be best to go. It felt like true alpinism,” Kobusch says. “So remote; no one was there, and you’re standing somewhere where you know no one has ever stood before. It was a real adventure. It’s difficult to have a real adventure today where things are unexplored.”

Want some adventure yourself? What are you waiting for?! Go climb a mountain! Check the world’s best adventures at The Outdoor Voyage.