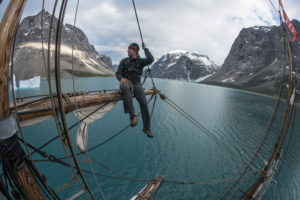 Standing over 1,000 feet taller than Yosemite’s El Capitan, the tower that Mike Libecki, Ethan Pringle, Keith Ladzinski and Andy Mann are hoping to climb over the next month is the kind of thing most climbers dream of.

In a remote corner of Greenland, they’ll battle the elements and enjoy a midnight sun as they attempt to become the first people to stand atop the as-yet unnamed spire.

Along with guys like Mike Horn and Jimmy Chin, American Mike Libecki is one of the most accomplished adventurers alive today. He has traveled to every corner of the globe, seeking out untouched, pristine landscapes. He snowboards, kite-skis, paddles and treks, among other modes of transportation.

But most of all, he climbs.

On Thursday, July 6, Libecki embarked on his newest expedition (number seventy-something on his resume) with an all-star cast made up of Ethan Pringle, Keith Ladzinski and Andy Mann. The foursome will attempt to climb a 4,000-plus-foot tower in Greenland, the region Libecki has returned to more than any other.

“There’s virgin earth in Greenland,” Libecki says, explaining the allure it has for him. “It’s one of the last and least explored places on the planet.”

Libecki refused to divulge precisely where the tower they hope to climb on this current expedition is located. “I specialize in finding the biggest, most remote walls on the planet, and this one is pretty special.”

And it really is about as remote as it gets. Libecki says of the tower, “It’s way back in a fjord.  You’d never see it from afar. Most everything that gets climbed in Greenland you can see from the the water. This tower is deep and hidden and remote,” he says.

Libecki has perfected the art of finding unclimbed mega-walls through a combination of scouring the high resolution satellite images and embarking on reconnaissance missions. The tower at hand has been on Libecki’s radar since 2003. Since then he’s made several scouting trips to Greenland, including a 60-mile solo journey on which he sighted the tower. “It’s a hidden castle of radness,” he says with his trademark mix of stoke, hyperbole and earnestness.

His first expedition with Ethan Pringle was in 2013, also in Greenland. Back then Pringle— one of the world’s strongest sport climbers today—was a neophyte in terms of exploratory big-wall climbing in extreme environments. Libecki gave him a crash course: the two established a 3,500-foot route on the northeast face of a formation called Daddy’s Tower, “in 52 hours, with a brief sitting bivouac,” according to the write-up in the American Alpine Journal. They named their route Built Fjord Tough. Libecki later partnered with Pringle a second time for an expedition to Yemen’s Socotra Island.

Keith Ladzinski has joined Libecki on several expeditions, including the aforementioned Greenland trip with Pringle. In 2012, Ladzinski joined him on an expedition to Queen Maud Land, Antarctica, in which they made the first ascent (along with Cory Richards and Freddie Wilkinson) of a formation they dubbed Bertha’s Tower.

In 2014 Andy Mann followed Mike into uncharted Greenland to scout out a tower called the Polar Bear Fang, but they never reached the spire. It was the fourth time that Libecki had tried to get there unsuccessfully. (Libecki finally made it to the Polar Bear Fang Tower and completed the first ascent of it with his brother, Andy, in 2015.)

As a result of these past collaborations, the crew that Libecki has assembled for this current tower have endured every imaginable situation with him: hot, wet, cold, sketchy, miserable, super cold, terrifying, chossy, wet and extremely cold, piercingly beautiful and everything in between. But through it all, Libecki says the “organic” friendships they share make it “all pleasure, joy and passion. There’s not one second of work we do together out there.”

Once Libecki and team arrive in Greenland, they will travel approximately 400 miles by boat, and then ferry 60 to 70 loads of gear to their base camp at the foot of the tower. They will spend between four and six weeks—“as long as we need to”—climbing and exploring.

Despite all the reconnoitering Libecki has done of Greenland’s unforgiving landscape and this particular tower, only once the team is finally below the monolith, craning their necks backward to scan the granite skyscraper for the best line, will they really begin to have an idea of what they’re in for. “Without mystery there’s no adventure. The nucleus of all my expeditions is mystery,” Libecki explains.

Mystery and, without question, appreciation for and wonder at the beautiful places he gets to visit. His social media posts, American Alpine Journal entries, videos and interviews are all chock full of infectious “Libecki-isms” like “Why ration passion?,” “Joyineering,” and “The time is now,”—all catchphrases full of indefatigable optimism.

Libecki, Pringle, Ladzinski and Mann can’t wait to find out what mystery this tower has in store for them and neither can we—check back soon to find out how their expedition turns out!