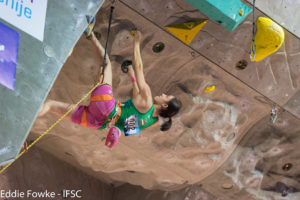 After a year that welcomed Sport Climbing into the Tokyo 2020 Olympic Games, Kranj closed fittingly: with applause for the athletes of the sport.

It was standing room only for the seventh and final IFSC Lead World Cup, and the Men were first to leave the ground. Mean slopers halfway up the route kept many competitors at bay, but Sebastian Halenke powered through the lower crux and marched into the upper section. His 37+ was unmatched by seven finalists and ended the German’s season on the right note, with his first IFSC Climbing World Cup victory. Runner-up Domen Skofic was the only other athlete to solve the challenging sequence, and he received much support from his home crowd while doing so.

By finishing better than seventh, he sealed the victory in the season Lead rankings and received a warm round of applause on the final podium. Although four Men were tied at 20 in Finals, only Austrian Jakob Schubert and Xiamen winner Stefano Ghisolfi Topped in both Semi-Finals and Qualifications. Tied in the countback, Schubert claimed Bronze with a quicker time in Finals. With Bronze, Schubert defended second place on the season over Romain Desgranges, finishing third.

The powerful and sustained Women’s route also saw no Tops. Bouldering star Akiyo Noguchi of Japan continued to prove her Lead prowess on Sunday, following up a fourth-place finish in Xiamen with Silver. Climbing seven holds higher was Anak Verhoeven of Belgium. Already second in the season Lead rankings, she fought the pump long enough to win her second IFSC Climbing World Cup. Janja Garnbret was the final climber to step onto the stage, and when she did the crowd erupted. Although she did not match Verhoeven’s mark, the Slovenian won Bronze and was still crowned season champion after her victory in Xiamen. Jain Kim of Korea placed sixth to round out the season podium. With a strong performance in the final IFSC Lead World Cup, Slovenia overtook France in the National Team Ranking for Lead. France still climbed well on the ropes this year, finishing second above Austria.

Canadian Sean McColl climbed strong at Kranj and missed the Finals cut by just one move, but the veteran athlete still finished first in the IFSC Climbing World Cup Combined rankings. Kokoro Fujii of Japan was the only athlete who could catch him, and Fujii did not compete at Kranj. Trading places with him in the Combined ranking was Schubert. Since only the top five results in each discipline count towards an athlete’s Combined score,

Schubert needed to finish fifth or better to pass the Japanese Bouldering star. His quick performance in Finals earned him second place on the podium. For the Women, Garnbret’s historic season was made complete at the award ceremony in Kranj. A crowded auditorium cheered for their local hero, officially world youth champion, world champion, and 2016 Combined and Lead champion. The decorated seventeen-year-old secured first place in the IFSC Climbing World Cup Combined rankings before Kranj after winning medals in both Bouldering and Lead this season. Noguchi clinched second place in the Combined with her performance at Xiamen. Jessica Pilz of Austria needed to finish thirteenth or better to unseat Speed world champion Anna Tsyganova of Russia, and she did exactly that in Kranj for Bronze.

For everything coming up in 2017 on the IFSC website: www.ifsc-climbing.org