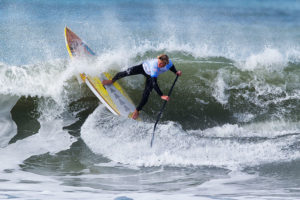 Since its inception in 2012, the International Surfing Association’s (ISA) World SUP and Paddleboard Championship has been the most exciting event of the year for the fastest growing watersport in the world.

The World Championship brings the best athletes to one spot and showcases their extreme skills you can watch the LIVE streaming of all the events here.

This year, the ISA is putting on the Championship event in the chilly waters of Denmark, where 286 athletes representing 42 countries will duke it out in all manner of disciplines, from SUP surfing to prone paddleboard distance sprinting. Over the course of ten days, 65,000 in-person spectators and countless more watching live online will help celebrate the ever-more popular sport of SUP and paddleboarding.

Tony Philp, TOJ ambassador, 13-time windsurfing world champion and the person responsible for bringing the 2016 ISA World SUP and Paddleboard Championship to Fiji, thinks Denmark was an inspired choice for 2017. “It’s good to spread the World Championship across different geographies,” Philp reasons. “The first four editions were all in South or Central America. Fiji was the year that opened it up. And so you can see the mindset becoming much more international now. It’s also a way to encourage the sport around the world.”

“I went to Denmark quite a few times during my windsurfing career,” Philp says. “They’ll definitely put on a great event, for sure. I think racing events in Copenhagen will be just awesome. It’s a natural arena, and so a lot of people will be able to get really close up to the action. It’ll put a great spin on the championship.”

In the five previous installments of the ISA World SUP and Paddleboard Championship, Australia has won the overall team event a whopping four times, most recently at the 2016 Championship in Fiji. The Team Champion goes home with the Club Waikiki-Peru World Team Champion Trophy. Australia hopes to continue its dominance this year with returning stars like Shakira Westdorp, the 2016 SUP surfing gold medalist, and Jordan Mercer, the winningest athlete of all time at the World Championships, poised to repeat their podium-topping performances. But with strong teams like Hawaii (with 2016 SUP surfing gold medalist Zane Kekoa Schweitzer on the team again) and host Denmark (whose 2016 winner in the SUP sprint and three-time gold-medalist in the technical race, Casper Steinfath, is returning), it’s sure to be an exciting couple weeks with any country liable to upset the returning champs.

One of the beautiful things about SUP is its versatility, and the diversity of the events at the ISA World SUP and Paddleboard Championship reflects this. There are events focused on speed, endurance, style and technical skill, each with its own personality.

The first three days of the Championship, from September 1-3, will take place in the harbor of Copenhagen, and feature the men’s and women’s distance and sprint races. The 20-kilometer distance race will see competitors complete four consecutive 5-kilometer laps around the Copenhagen waterfront, starting at the Opera House. Distance races will be held in both SUP (with the rider upright) and prone paddleboard (with the rider lying down) disciplines.

The SUP Sprint is a lightning fast display of SUP mastery over 200 meters. The event was simply a trial race last year, but this year it is a full-fledged part of the Championship that counts towards the standings. Check back at The Outdoor Journal next week for an interviews with the 2016 men’s gold medalists in the SUP sprint, Casper Steinfath (Denmark).

After the distance and sprint races wrap up, the Championship moves northwest to Vorupør and a stretch of North Sea coastline, from Agger Tongue to Vigsø, known as “Cold Hawaii.” The official Championship website notes that, “No one seems to know where the name ‘Cold Hawaii’ came from. Now and again, people claim to have invented the name, but the truth is that nobody has been able to document it. So the safest thing to say is that Cold Hawaii comes from the people – from us, the surfers.”

With more than 30 surf breaks and reliable 1-2 meter waves, Cold Hawaii is an ideal venue for the best SUP Surfing. Athletes will compete to catch the best waves and will be judged based on their “ability to get the most out of the wave,” and “his or her ability to use the paddle as part of his or her performance.” The Outdoor Journal will be posting interviews with the 2016 SUP surfing gold medalists, Shakira Westdorp (Australia) and Zane Kekoa Schweitzer (Hawaii), on the site in the middle of next week.

Also taking place at Cold Hawaii will be the Technical Races, both SUP and prone paddleboard, in which athletes navigate a slalom-like course in the water, bracketed by a sprint on the beach at the beginning and end of the race

Finally, the last and one of the most exciting events at the Championship is the Team Relay. Teams of four―two men and two women―from each country compete in an out-and-back relay to an offshore buoy, fighting to be the first team to have all its members across the finish line.

In a press release ahead of the Opening Ceremony on Friday, September 1, ISA President Fernando Aguerre was quoted saying, “The beautiful canals of Copenhagen and pristine beaches of Cold Hawaii will provide an amazing backdrop for this record-breaking event.” The people of Denmark, SUP fans and and all sporting enthusiasts are in for an action-packed week-and-a-half competition. The Outdoor Journal will host a livestream of the Championship on our website each day. Additionally, we’ll have competition results, exclusive interviews and athlete profiles. Check back to see how the world’s best paddlers fare!

The water calling your name? Head to The Outdoor Voyage to see how you can answer the call.